Fully 71% of online adults now use Facebook, and usage among seniors has increased significantly in the last year. Some 45% of internet users age 65 or older now use Facebook, up from 35% who did so in late 2012. Women are also particularly likely to use Facebook compared with men. 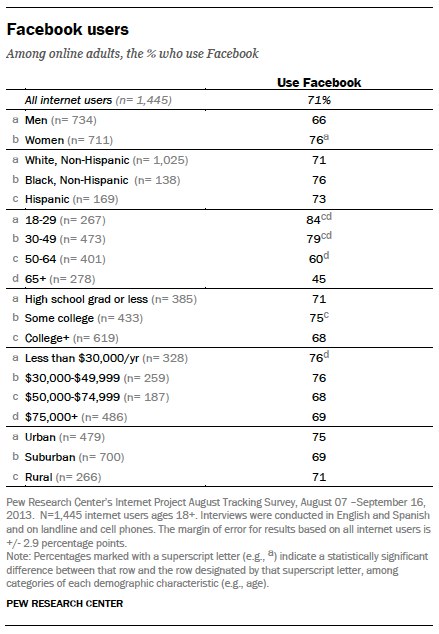 Some 18% of online adults currently use Twitter, statistically similar to the 16% who did so in 2012. As was the case in our previous surveys on Twitter use, adoption levels are particularly high among younger adults and African-Americans. 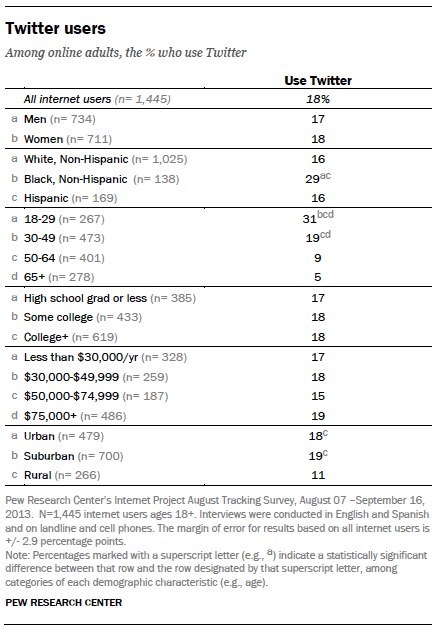 Some 17% of online adults use Instagram, up from 13% in late 2012. Two groups in particular have experienced a notable increase in Instagram usage in the last year. Instagram adoption by internet users ages 18-29 has increased from 28% in late 2012 to 37% in 2013, and adoption by African American internet users has increased from 23% to 34% over the same time period. Instagram was acquired by Facebook in April 2012. 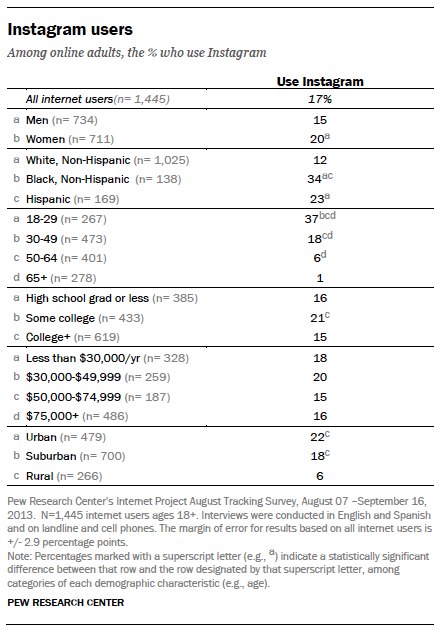 Some 21% of online adults use Pinterest, up from the 15% who did so in December 2012. Women continue to dominate the site: fully 33% of online women are Pinterest users, compared to just 8% of men. Pinterest users also skew slightly towards the affluent side – those in the highest income bracket are more likely than those in the lowest to use the site, as are those with a college degree or higher compared to those who have not attended college. 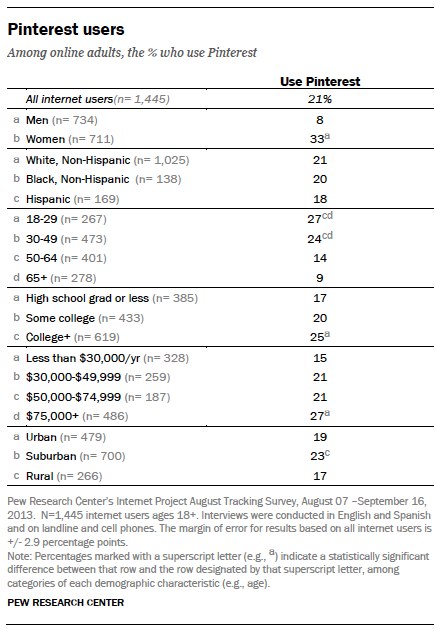 Some 22% of online adults are LinkedIn users. As a platform geared towards professional networking, its user demographics are unique from the other sites discussed above. Specifically, LinkedIn usage is especially high among people with a college degree or higher, and among those with an annual household income of $75,000 or more. It is also the only social networking site we measured for which usage among 50-64 year olds is higher than usage among those ages 18-29.

Next: Frequency of social media use
← Prev Page
Page1You are reading page2Page3Page4Page5
Next Page →

Coming and Going on Facebook
72% of Online Adults are Social Networking Site Users
Social Media Update 2014
Social Media Update 2016
Coming and Going on Facebook
Americans overwhelmingly say marijuana should be legal for recreational or medical use
Biden Nears 100-Day Mark With Strong Approval, Positive Rating for Vaccine Rollout
Quiz: Are you a Core Conservative? A Solid Liberal? Or somewhere in between?
What the data says about gun deaths in the U.S.
Social Media Use in 2021