As of May 2013, 70% of American adults ages 18 and older have a high-speed broadband connection at home, according to a nationally representative survey by the Pew Research Center’s Internet & American Life Project. This is a small but statistically significant rise from the 66% of adults who said they had home broadband in April 2012. 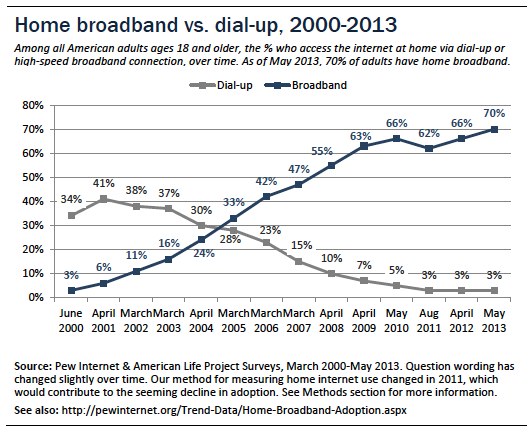 The demographic factors most correlated with home broadband adoption continue to be educational attainment, age, and household income. Almost nine in ten college graduates have high-speed internet at home, compared with just 37% of adults who have not completed high school. Similarly, adults under age 50 are more likely than older adults to have broadband at home, and those living in households earning at least $50,000 per year are more likely to have home broadband than those at lower income levels.

In recent years internet-connected mobile devices such as smartphones have exploded in popularity, offering an alternate form of “home” internet access. Today 56% of American adults own a smartphone of some kind, compared with 70% who have broadband at home.3

There is no widespread consensus as to whether 3G or 4G smartphones qualify as “broadband” speed, and many would question whether they offer the same utility to users as a dedicated home internet connection (activities such as updating a resume, filing taxes, or viewing educational content are certainly more challenging on a smartphone operating over a cell phone network, than on a broadband-connected home computer). For these reasons, smartphones are qualitatively distinct enough that we do not include them in our standard definition of what constitutes a “broadband user.”

At the same time, smartphones do offer a potential source of online access to individuals who might otherwise lack the ability to go online at all from within the home, even if that access is somewhat limited in comparison. And indeed, 10% of Americans indicate that they do not have a broadband connection at home but that they do own a smartphone (another way to say this is that 32% of non-broadband users own a smartphone). If we include that 10% of Americans with the 70% who have traditional broadband, that means that 80% of Americans have either a broadband connection, a smartphone, or both. Here is how the 80% breaks down:

The remaining 20% of Americans have neither a home broadband connection nor a smartphone. 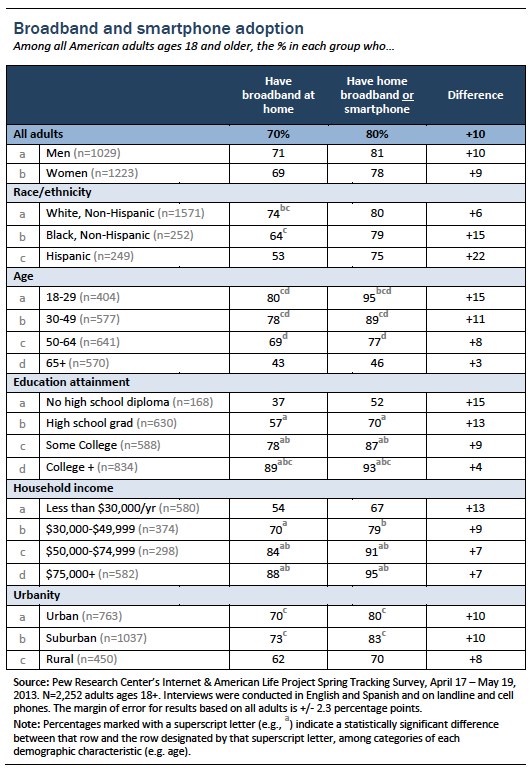 The Census Bureau’s July 2011 Current Population Survey found that about 98% of U.S. households live in areas where they have access to broadband Internet connections as of July 2011, although only 69% of households used broadband at home.5 (According to the National Telecommunications and Information Administration and the Economics and Statistics Administration, the proportion of Americans households with home broadband rose to 72% as of October 2012.) In April 2009, Pew Internet asked adults who had dial-up internet at home what it would take for them to switch to a broadband connection. A plurality (35%) said the price would have to fall, 17% said it would have to become available where they live, and one in five (20%) said nothing would get them to change.6

In May 2010, Pew Internet found that Americans generally feel that individuals who do not have broadband at home are at a major disadvantage when it comes to finding out about job opportunities or learning career skills, or when getting health information, learning new things for personal enrichment, and using government services. However, nearly half of adults felt that those without broadband access are not at a disadvantage when it comes to keeping up with news and information or keeping up with what is happening in one’s local community. Minority Americans were more likely to see a lack of broadband access as a major hindrance to accomplishing numerous tasks, while older adults (specifically those ages 65 and older) were less likely to see the drawbacks of a lack of high-speed access.7