A combination of landline and cellular random digit dial (RDD) samples was used to represent all adults in the continental United States who have access to either a landline or cellular telephone. Both samples were provided by Survey Sampling International, LLC (SSI) according to PSRAI specifications.  The landline sample for this survey was designed to generalize to the U.S. adult population and to oversample African Americans and Hispanics. To achieve these objectives in a cost effective manner, the design uses standard list-assisted random digit dialing (RDD) methodology, but telephone numbers are drawn disproportionately from telephone exchanges with higher than average density of African American and/or Hispanic households. The cellular sample was not list-assisted, but was drawn through a systematic sampling from dedicated wireless 100-blocks and shared service 100-blocks with no directory-listed landline numbers.

Disproportionate sampling and non-response in telephone interviews can produce biases in survey-derived estimates. The dataset was weighted in two stages.  The first stage of weighting corrected for the disproportionate landline sample design and also accounted for the overlapping landline and cellular sample frames as well as different probabilities of selection associated with the number of adults in the household. The second stage of weighting matched overall sample demographics to population parameters. The demographic weighting parameters are derived from a special analysis of the most recently available Census Bureau’s March 2009 Annual Social and Economic Supplement. This analysis produces population parameters for the demographic characteristics of adults age 18 or older. These parameters are then compared with the sample characteristics to construct sample weights. The weights are derived using an iterative technique that simultaneously balances the distribution of all weighting parameters. Following is the full disposition of all sampled telephone numbers: 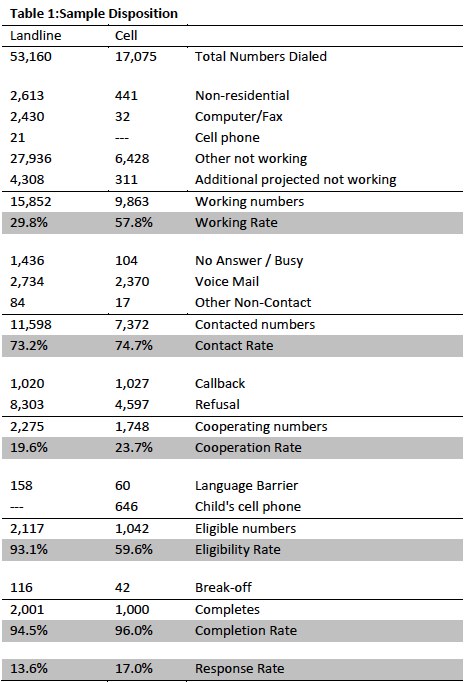