Why Americans Use Social Media

Two-thirds of online adults (66%) use social media platforms such as Facebook, Twitter, MySpace or LinkedIn.1 These internet users say that connections with family members and friends (both new and old) are a primary consideration in their adoption of social media tools. Roughly two thirds of social media users say that staying in touch with current friends and family members is a major reason they use these sites, while half say that connecting with old friends they’ve lost touch with is a major reason behind their use of these technologies.

Other factors play a much smaller role—14% of users say that connecting around a shared hobby or interest is a major reason they use social media, and 9% say that making new friends is equally important. Reading comments by public figures and finding potential romantic partners are cited as major factors by just 5% and 3% of social media users, respectively. 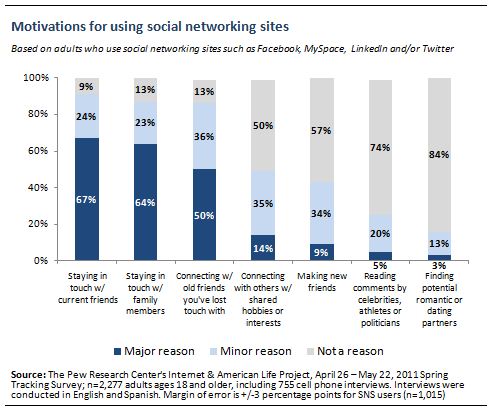 Staying in touch with family members is a major factor across a range of social media users, but it’s especially important to women

Those who say that keeping up with family members is a major consideration in their use of social networking sites are a demographically diverse group. Two-thirds of all social media users cite family connections as a major reason for their use of these tools, and there are no major differences on this question in terms of age, income, education, race/ethnicity, parental status or place of residence. The primary difference on this topic pertains to gender, as female social media users are more likely than male users to cite family connections as a major reason for using these sites (72% vs. 55%).

Compared with older adults, social media users under the age of 50 are especially likely to say that these tools help them keep up with existing friends and reconnect with old ones—roughly seven in ten users under the age of fifty say that staying in touch with current friends is a major reason they use online social platforms, and just over half say that connecting with old friends they’ve lost touch with is equally important. Each of these is significantly higher than comparable figures for users ages 50 and older, although a relatively large number of older adults point to connections with friends as a major reason for their social networking site usage as well. 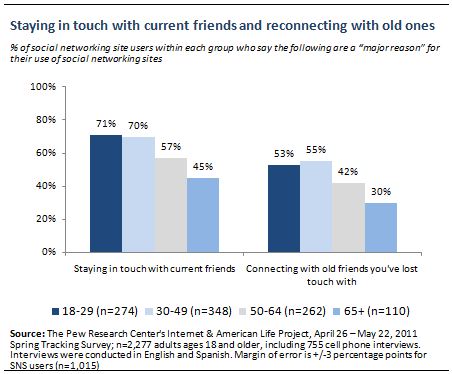 In addition to age, gender and parental status are linked with users’ attitudes towards social media as a way to maintain connections with friends. Women are slightly more likely than men to say that staying in touch with current friends is a major reason for using online social tools (70% vs. 63%) while parents are more likely than non-parents to say that connecting with old friends is a major reason behind their use of these sites (56% vs. 47%).

Compared with keeping tabs on current friends or old acquaintances, users place much less emphasis on using social platforms to make entirely new friends—just 9% say this is a major reason they use these sites, and 57% say that it is not a reason at all for their online social networking activity. Groups that are more likely than average to use social media to make new friends include men (12% say that making new friends is a major reason for using these sites), African Americans (15%), those who have a high school diploma but have not attended college (16%) and those with an annual household income under $30,000 (18%).

Compared with maintaining or rekindling friendships, the ability to connect with others who share a hobby or interest using social media resonates with a slightly older cohort of users. Sixteen percent of 30-49 year olds and 18% of 50-64 year olds cite connecting with others with common hobbies or interests as a major reason they use social networking sites, compared with 10% of 18-29 year olds.

Additionally, men are a bit more likely than women to use these sites to connect around a hobby or interest—56% of male users say that this is either a major or minor reason for their usage of these sites, compared with 44% of female users.

Connecting with public figures online is relatively popular among Twitter users, as well as African Americans and Latinos

Among social media users as a whole, the ability to read comments by public figures such as politicians, celebrities or athletes does not come into play as a major factor—fully three quarters of users say that this plays no role whatsoever in their decision to use these sites. And while connecting with public figures has a relatively modest impact on users across a range of groups, both African Americans and Latinos show more interest in this activity than white users. One in ten black social media users (10%) and 11% of Latinos say that reading comments from public figures is a major reason for using these sites (compared with just 3% of white users). Black and Latino social media users are also more likely to say that this is a minor factor (31% of blacks and 26% of Latinos say this, compared with 16% of whites). 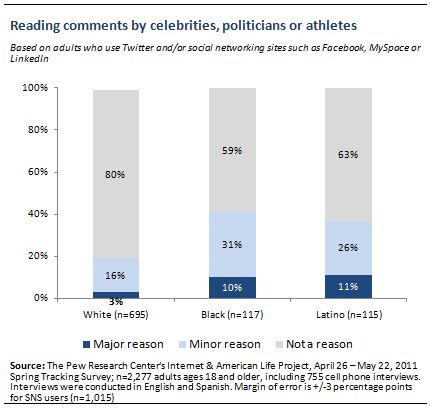 Additionally, Twitter users are more interested in connecting with public figures than are social media users who do not use Twitter. One in ten Twitter users (11%) say that reading comments by politicians, celebrities or athletes is a major reason they use online social networks, and 30% say that this is a minor reason for their usage of these sites. Each of these is notably higher than the average for social media users who do not use Twitter (4% of these users say this is a major reason for using these sites, with 11% citing it as a minor reason).

Very few social media users say that finding potential romantic partners or people to date plays a role in their use of these sites—overall more than eight in ten (84%) do not use these sites for that purpose at all. Most of the remainder say that the prospect of romance is only a minor reason. Most differences on this question are quite modest—for example, men are twice as likely as women to say that finding potential dating or romantic partners is a minor reason for using online social platforms (17% vs. 9%) but overall few men say that this is a major factor (just 4% do so).

To be sure, many Americans are currently in relationships or may not otherwise be seeking dating or romantic partners in any venue (on social networking sites or otherwise). Among those users who identify themselves as single, separated or divorced, 6% say that finding romantic or dating partners is a major reason why they use these sites (an additional 27% say that this is a minor reason for their social media usage).

22% of online Americans used social networking or Twitter for politics in 2010 campaign
Parents and Social Media
Older Adults and Social Media
Social Networking Websites and Teens
Social Media and the Workplace
Quiz: Are you a Core Conservative? A Solid Liberal? Or somewhere in between?
More Americans now say academic concerns should be a top factor in deciding to reopen K-12 schools
Defining generations: Where Millennials end and Generation Z begins
How the Coronavirus Outbreak Has – and Hasn’t – Changed the Way Americans Work
Views on Race in America