One-quarter of Americans use the internet as a major source of campaign news in 2010, up from 7% in 2002

One-quarter of American adults (24%) got most of their campaign information from the internet during the 2010 midterm elections, a three-fold increase from the 7% who said this during the 2002 midterm elections. Over that same time, the proportion of Americans who use television and radio as major political news sources has remained stable, while the proportion using newspapers has fallen from 33% in 2002 to 27% in 2010. The proportion of Americans who get most of their campaign news from the internet has increased by 60% since the 2006 midterms alone. 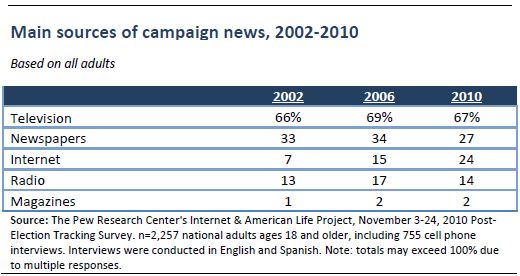 Young adults are especially reliant on the internet as a source of campaign and election news. Those ages 18-29 are five times as likely as those 65 and older to say that they got most of their election news in 2010 from the internet (36% vs. 7%). Although young adults are among the most likely groups to use the internet for campaign news, the use of online sources for campaign news has grown significantly since the 2002 midterm elections for all major demographic groups. 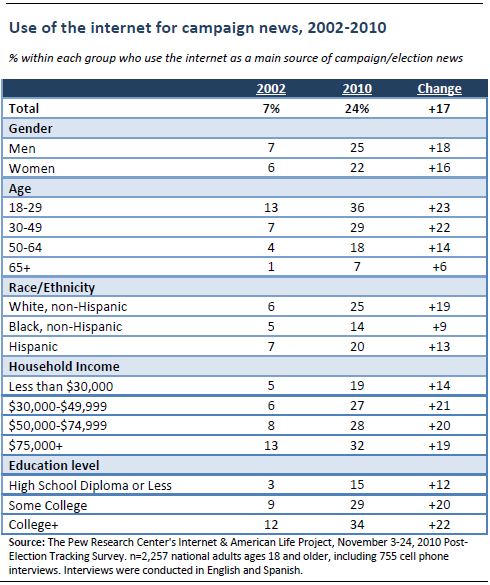 As in the previous midterm election campaign in 2006, local news programming is the most common destination for televised political news. One-third (33%) of those Americans who get political or campaign news from television say that they get most of this news from local news programming, a figure that is unchanged from the previous midterm election in 2006.

The proportion of Americans who get most of their news from the Fox News Channel rose five percentage points between 2006 and 2010, making it the only individual TV news outlet with a notable increase over this time period. Meanwhile, the proportion saying they get most of their news from CNN and each of the three network nightly news programs dropped slightly between the 2006 and 2010 midterm elections. 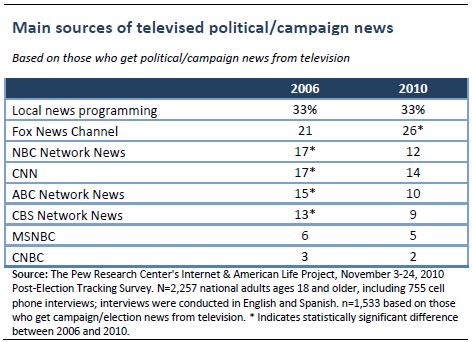 In terms of political differences in television news consumption, Republican voters, Tea Party supporters and conservatives are much more likely than Democratic voters, liberals, and those who do not support the Tea Party to get political or campaign news from Fox News Channel. The latter groups are more likely to say that they get campaign news from sources such as CNN, MSNBC or network news programs. 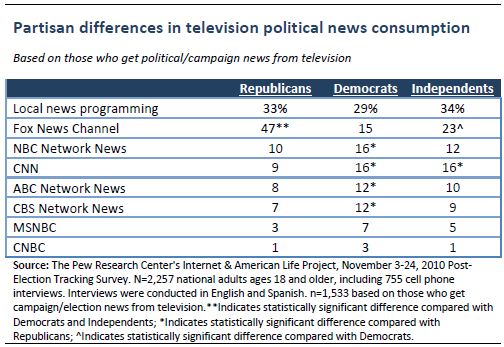 When asked an open-ended question about their main sources for online campaign news, the 24% of U.S. adults who get most of their election coverage from the internet mention a number of sites. Roughly one in five online political news consumers mention either CNN.com (22%) or yahoo.com (20%), while one in ten mention the websites of Google (13%), Fox (10%) or MSN (10%). A smaller number of online political news consumers get most of their news from sites such as Aol.com, the New York Times website or sites such as the Drudge Report or Huffington Post. 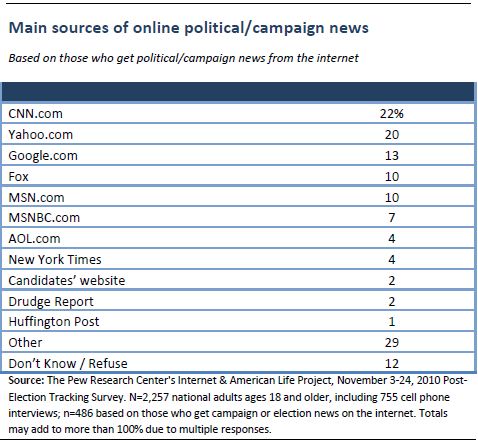 Online political news with a point of view

Online political users who identify with a political party tend to prefer online news sources that share their point of view, while political independents tend to gravitate towards sites that do not have an overt point of view. 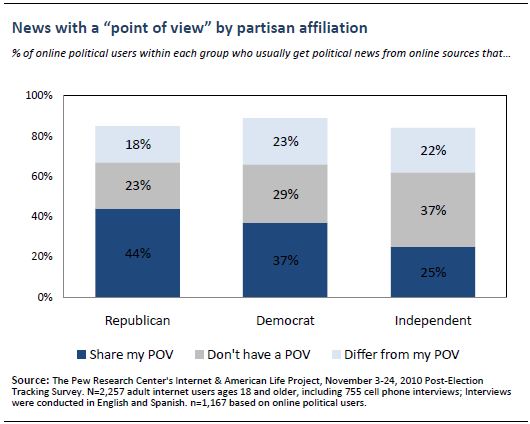 Next: How Americans used the internet in campaign 2010
← Prev Page
Page1Page2You are reading page3Page4Page5Page6Page7
Next Page →