Ever since internet use became a notable part of political media in the late 1990s, there have been intense debates about the impact of the internet on politics. For the first time in our post-election surveys, we asked some questions to test public attitudes about the role of the internet in American political culture. The answers showed how conflicted people are about the internet: Many expressed positive views about the effect of digital technology on their personal engagement with politics, but also noted concerns about the ways in which the internet might be influencing the broader culture and tone of politics.

How the internet influences the ability to connect with others politically

How the internet influences the prevalence of extreme views

Interestingly, there are relatively few differences on this question based on demographic characteristics or one’s level of online political engagement. Those who feel that the internet has made it easier to meet up with others who share their views, are no less likely than those who downplay the internet’s role in connecting with others to see the internet encouraging  extremism. Additionally, the 21% of online adults who are active politically on social networking sites are just as likely as other internet users to say that the internet increases the influences of extreme political views.

Politically, Democrats and those who disagree with the Tea Party movement are a bit more likely to agree with the statement that the internet increases the influence of those with extreme views compared with Republican voters and Tea Party supporters. 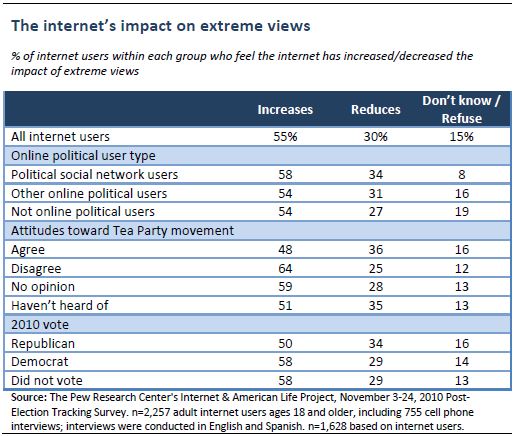 How the internet influences exposure to a diverse range of views

Those online adults who utilize the internet for political information and engagement are significantly more likely than other internet users to feel that they are being exposed to a wider range of material thanks to the internet. This is especially true for the one in five online adults who use social networking sites for political purposes—fully 74% of these “political social networkers” feel that the internet exposes people to a wider range of political views than they can find elsewhere.

Difficulties in determining truth from fiction in the online world

How the internet influences voting behavior

One in five online political users (22%) say that the news and information they found online in 2010 encouraged them to vote in the 2010 elections, compared with just 4% who said that this online content actually discouraged them to vote (73% said it had no impact one way or the other). These figures are nearly identical to the findings we got the last time we asked this question, in 2004 (at that point 23% of online political users said that they were encouraged to vote by the material they found online).

A slightly larger number of respondents said that the political information they saw or read online made them decide to vote for or against a particular candidate—35% of internet users who voted in 2010 said this. There are relatively few demographic differences on this question, although voters with strong views towards the Tea Party movement were particularly likely to say that online information helped them decide who to vote for. Fully 39% of internet-using voters who support the Tea Party movement and 38% of such voters who disagree with the movement said this, compared with 30% of those with no opinion of the movement one way or another, and 20% of voters who had not heard of the group.