The downloading population is demographically skewed

The downloading population is demographically skewed

As with the apps-using population as a whole, apps downloaders are younger, more educated, and disproportionately male when compared with the full U.S. adult population.  When downloaders are compared just to other adults with apps—those who have preloaded apps but do not download—they are similar in their educational attainment yet are still disproportionately young and male. 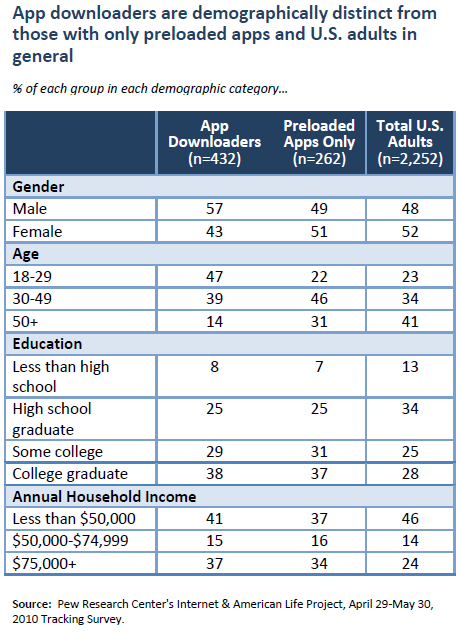 One in ten adults with a cell phone has downloaded an app in the past week; one in five 18-29 year-old cell phone users has done so

Thus, even among downloaders, the portion who is very actively engaged in apps culture is relatively small.  A significant percentage of downloaders, 43%, say they have not downloaded an app in more than a month. 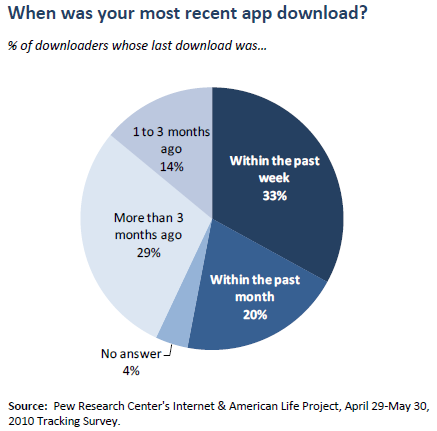 There are very few notable demographic differences between downloaders who pay for apps and those who do not.  Only one subgroup of downloaders stands out in this regard, and that is heavy cell voice users.  Downloaders who make more than 30 calls on their phone per day are significantly more likely than other downloaders to have paid for an app (61% v. 45%).

For more on what types of apps downloaders pay for, and how much they spend, see Part IV of this report.