How Americans use government websites

On Barack Obama’s first full day in office, the administration released an executive order establishing an Open Government Directive. The order offered a vision for government organized around three principles:

Throughout 2009, a number of federal agencies produced innovative products in support of this strategy. Agencies such as NASA have used social media tools to promote interest in their missions among new demographics, and the State Department used text messaging and Twitter to send highlights of the president’s June 4, 2009 speech in Cairo to more than 200 countries in 13 different languages, posting many of the best responses on its website.1 The FCC’s broadband.gov site allowed citizens to track the development of the agency’s broadband plan online, to share key findings with their friends, and to interact with the agency in real time using tools such as Twitter. The recovery.gov site helped citizens track projects funded by the Recovery Act (the “stimulus bill”) and report potential instances of fraud or waste.

These federal projects represent some of the most visible manifestations of the new online government culture, but state and local agencies are also getting into the act. The District of Columbia’s Apps for Democracy–which offered a cash prize to the developer who could produce the most user-friendly applications based on government data—ultimately led to the development of 47 different applications (with an estimated value to the city of $2.3 million) at a cost of just $50,000 in prize money. The City of Santa Cruz, California used collaborative online tools to enlist the help of citizens in closing a $9 million budget gap. Other politicians and agencies—from Newark Mayor Corey Booker to the Bay Area Rapid Transit Agency—have used social media tools to communicate and interact with constituents in real time. Ultimately, e-government advocates such as Tim O’Reilly envision an era of “government as a platform”, where citizens can use open government data to build their own tools and collaborate directly in the process of governing.2

We previously asked a subset of these questions in 2001 and 2003, and while participation in some of these activities has grown over that time, others have not changed appreciably. Our 2001 survey was a callback survey of individuals who had interacted with government online in the past year, so those figures are not directly comparable to this particular survey. However, even accounting for those methodological differences it is clear that many more Americans are now completing simple transactions with government than was the case in 2001. At that time, just 2% of online government users had paid a government fine online—now, 15% of all internet users have done so. Similarly, 4% of online government users had applied for a recreational license online in 2001, a figure that has now grown to 11% of all internet users. Renewing driver’s licenses and auto registrations has also become much more common—from 12% of online government users in 2001 to one-third of all internet users today.

As these transactional interactions with government have become more common over the years, other types of online government activities are no more or less common than they were in the early part of this decade. The proportion of internet users who go online to get health or safety information from a government agency, get recreational or tourist information, research government documents or statistics, or get information about government benefits have not changed significantly since the last time we asked about these activities in 2003. With that said, while the incidence of these activities within the online population has not grown appreciably over the last six years, the growth of the size of the online population (from roughly six in ten adults to three-quarters of all adults now) means that these activities are now more common within the entire US population (taking both internet users and non-users into account) than they were in 2003.

Usage of government websites to get information or complete transactions is relatively common among internet users in all major demographic groups, although it is especially prevalent among those who have attended college, as well as those with a household income of $50,000 or more per year. Additionally, African Americans are slightly less likely to be online government users than whites. Those with a high-speed home internet connection as well as those who go online wirelessly are also more likely than average to use online government services. Fully 85% of home broadband and mobile internet users have accessed information or completed a transaction on a government website in the last year, compared with 68% of home dial-up users and 75% of stationary internet users. 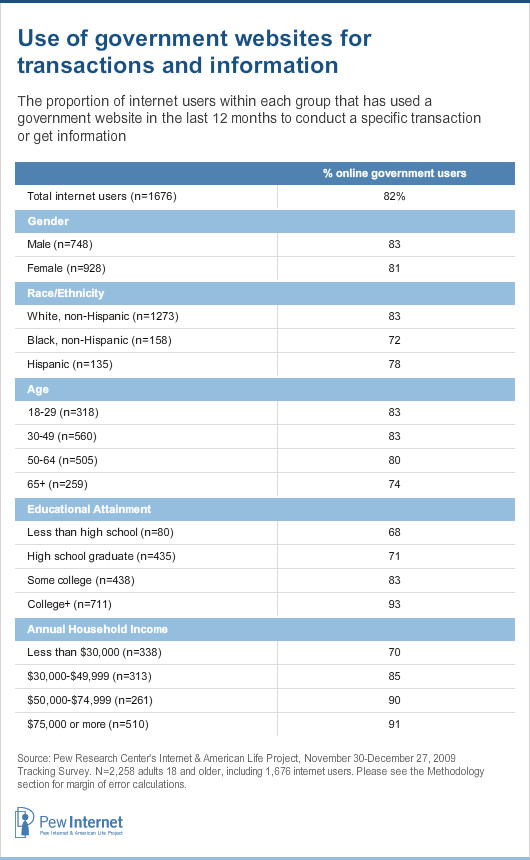 Online Americans prefer to contact government using digital means, but the telephone remains popular among the population as a whole

As we found in our last survey of e-government in August 2003, telephone contact is the overall most preferred contact method when people have a problem, question or task involving the government. Currently, 35% of Americans say they prefer using the telephone in these circumstances, a figure that is relatively unchanged from the 38% who said so in 2003. Similarly, online contact (either sending an email or visiting a website) is the preferred method of contact of 28% of Americans, a figure that is again unchanged from the 26% who cited sending an email or visiting a website five years ago. Among the population as a whole, when faced with a question, problem or task that requires contact with government:

Interestingly, although the total proportion of Americans who prefer online communication when contacting government has remained unchanged since our last government survey, in that time the relative popularity of sending an email and visiting a website has reversed. In 2003, 17% of respondents said they preferred to visit a website and 9% preferred sending an email; in our current survey, those who prefer email contact rose to 18% and those who prefer visiting a website fell to 10%.

Broadband and wireless internet users are largely responsible for these differences between internet users and non-users. Two in five home broadband users (39%) prefer online contact when trying to reach government, compared with 23% of home dial-up users. Similarly, 40% of those who access the mobile web prefer online contact, a figure that is slightly higher than the 30% of non-mobile internet users who do so. Online contact does not replace any particular method of offline contact—compared to the population as a whole, internet users (as well as broadband and mobile users more specifically) are slightly less likely to prefer all forms of offline contact relative to non-users. Even so, it is notable that the telephone remains relatively popular even among the technologically proficient, as one-third of home broadband (32%) and wireless internet users (32%) say that the telephone is their favorite means of contact when they need to get in touch with government.

In addition to asking respondents about their online government activities in the preceding twelve months, we also asked all internet users whether or not they could remember the last government website they visited, regardless of when that interaction occurred. Roughly two-thirds of internet users (64%) and three-quarters of online government users (73%) could indeed recall the last site they visited, and we asked these individuals to tell us which site it was that they went to. Their responses were far-ranging, and provide an interesting insight into the spectrum of government agencies and specific government-related tasks in which Americans take part. Among respondents who could remember the last government website they visited:

The remaining 5% of responses were those that we were unable to categorize under any of the labels above. A small number of these responses were clearly not government websites, while others were simply too vague to classify into a meaningful category.

Search engines are the most common entry point for government website interactions. Among those who could recall the government website they visited most recently, 44% used a general search engine to figure out where they needed to go. This reliance on search is similar to what we found in our 2003 e-government survey. Using a slightly different question wording, we found that 37% of those whose last government contact involved visiting a web site arrived at that site via a search engine query.3

Search engines are the most common starting point for obtaining online government information among all major demographic groups, although there is some minor variation based on income and age. Those with an annual household income of less than $30,000, for example, are more likely to rely on recommendations from friends, family members or advertisements while those at higher levels of income are more likely to say they went to a site they had visited before. Additionally, those ages 18-29 are significantly less likely than those in other age groups to go to a site listed in a government publication or notice. Otherwise, there are few differences on this question relating to age, educational attainment, gender or race. 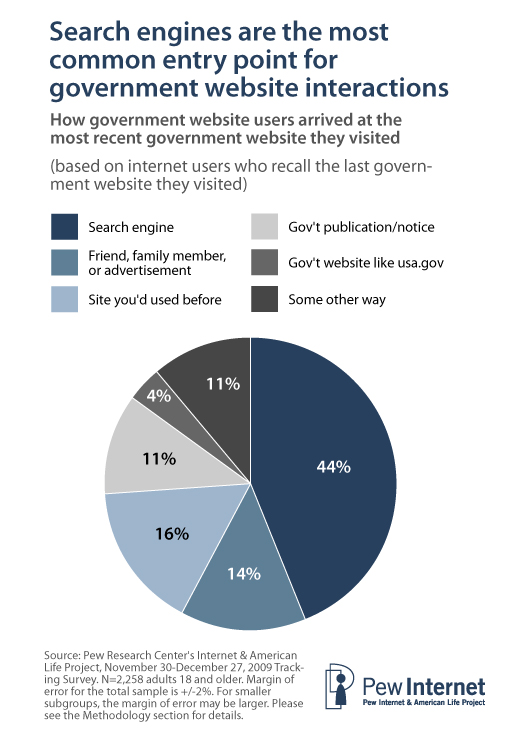 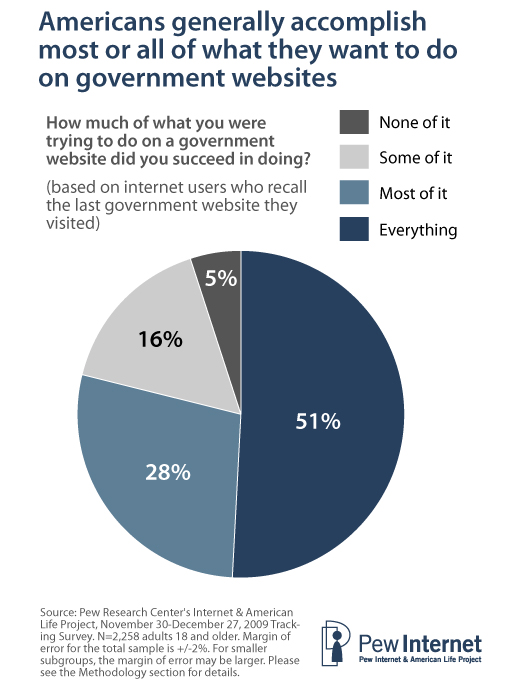 Overall, there is surprisingly little demographic variation when it comes to whether or not someone is successful in accomplishing their goals on a government website. Technology ownership also plays a minimal role—there are no differences on this question between broadband and dialup owners, and wireless internet users are only slightly more likely to find success on government websites than are stationary internet users. 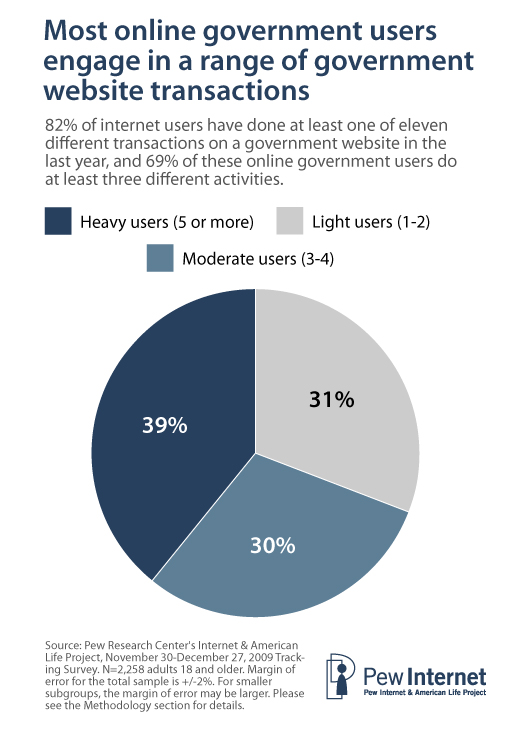 Demographically, heavy and moderate users of online government services have substantially higher levels of income and education than those who interact with government websites only occasionally. Light users are split equally between those with a high school degree or less, and those with some college experience or a college degree. By comparison, eight in ten heavy users have been to college (and just over half have a college degree). Similarly, 33% of light users have an annual household income of less than $30,000 while 35% of heavy users earn more than $75,000 per year. Compared with light users, heavy and moderate users are also slightly more likely to be middle-aged (30-49 years old) and less likely to be younger than thirty or older than 65. 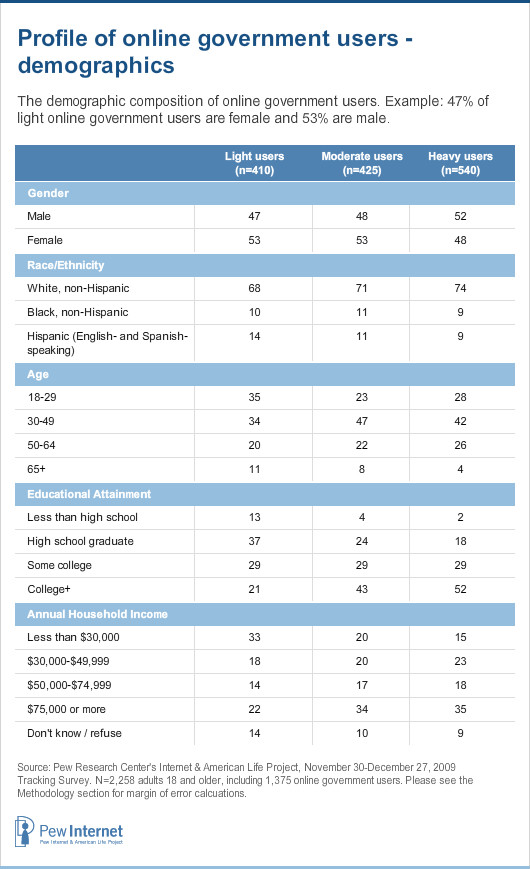 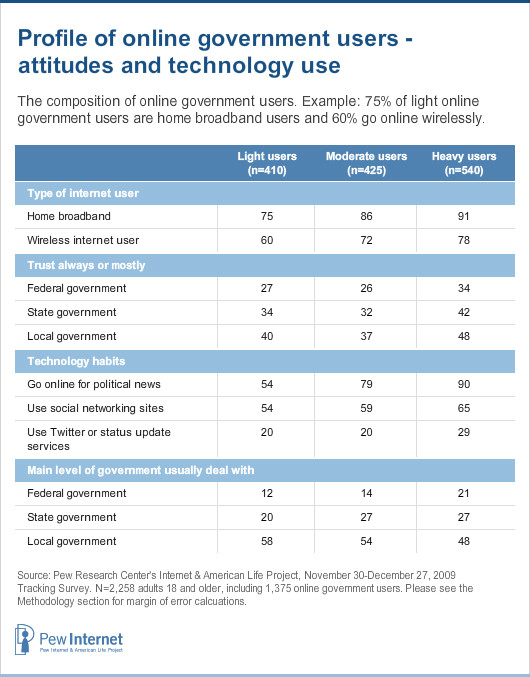 44% of all adults have had an offline interaction with government in the last year, and Americans frequently use multiple channels to access government services and information

Demographically, contact with government via offline means is most common among whites, those with higher levels of income and education, and those between the ages of 30 and 64. Minority groups, young adults, seniors, those who have not attended college and those with household incomes under $30,000 per year are much less likely to have been in contact with government in the last year using offline channels. Generally speaking, those who contact government using offline means are demographically similar to online government users. The primary difference involves age—online government users are younger, with a median age of 39 (those who contact government offline have a median age of 47). 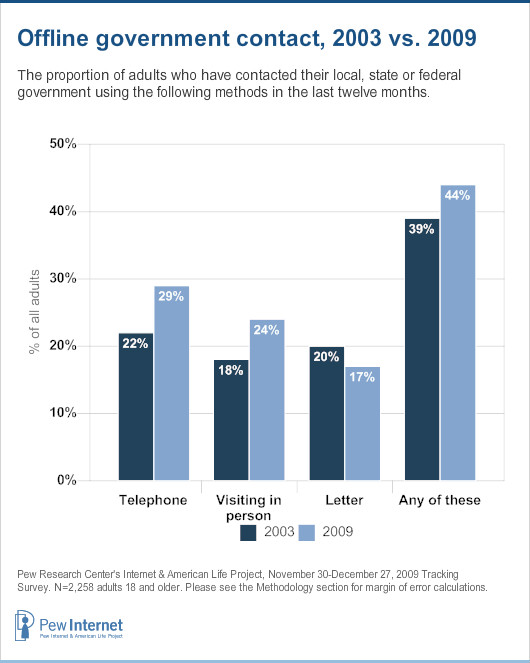 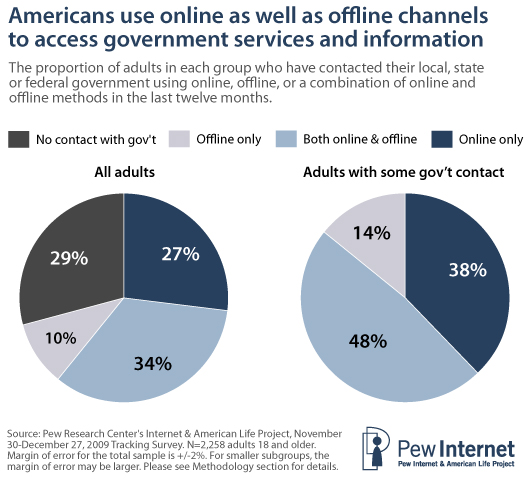 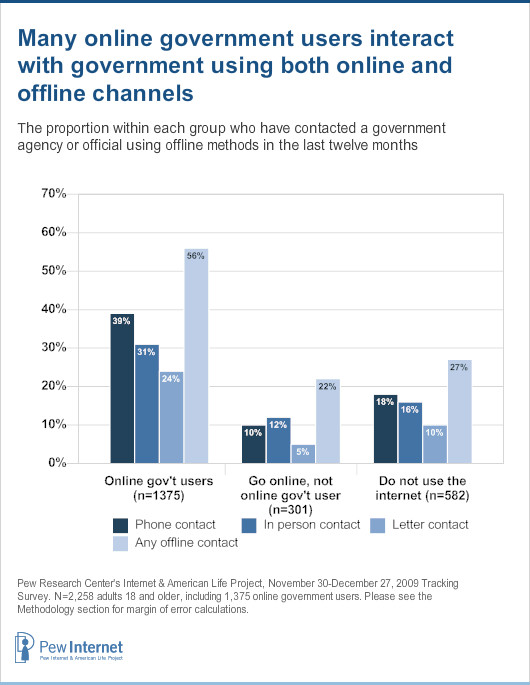 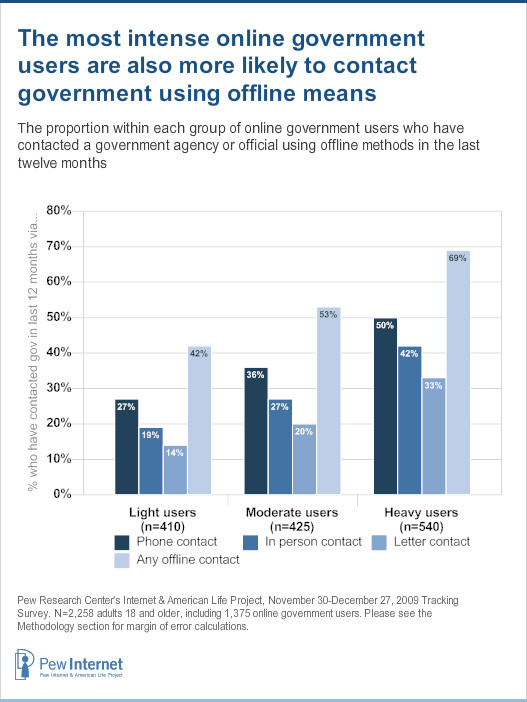 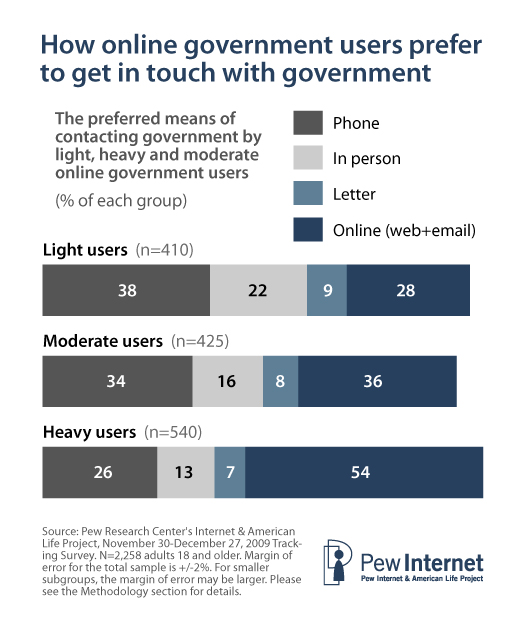 Online government users who visit a range of government websites are also much more likely than light or moderate users to use new tools such as email, blogs, social networking sites or online video to get information or keep in touch with government, and to take part in the online discussion around government issues or policies. These findings will be discussed in more detail in Parts 2 and 3 of this report. 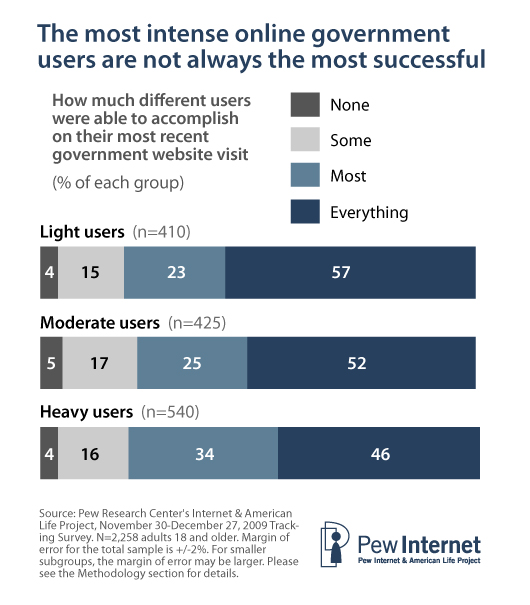