For many good government advocates, providing citizens with access to vast stores of previously-unavailable government data represents the internet’s greatest promise for improving the relationship between the government and its constituents. To measure the extent to which citizens go online to access data on the business of government, we asked internet users whether they had visited any of four specific types of websites in the last year. Although these services do not necessarily comprise a comprehensive list of government data services, they cover a relatively broad spectrum of the activities considered important by advocates of transparency in government. The activities we asked about include:

In total, 40% of internet users have gone online in the past 12 months for one or more of these reasons. Throughout this section, we refer to these individuals as government data users. Looking into stimulus spending (23% of internet users have done this) and going online to read the text of legislation (22%) are the two most common of these activities.5 More than half of government data users (55%) have done two or more of these activities in the last year. 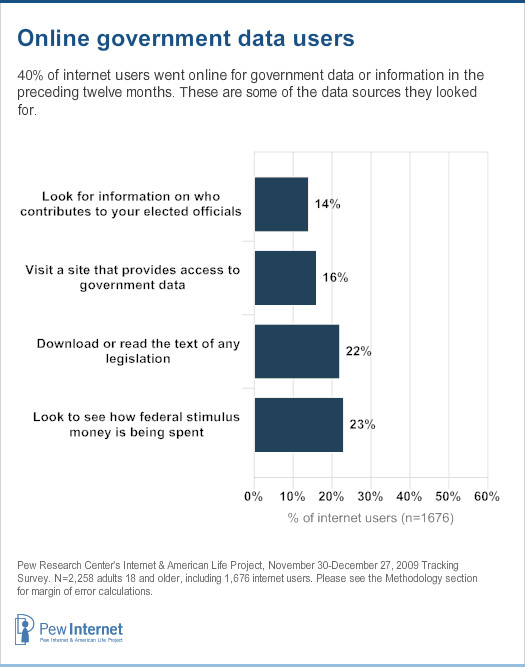 Much like the government participatory activities we discussed in the preceding section, these online government data services appeal especially to high income, highly educated white males. Nearly half (48%) of government data users have graduated from college, and more than a third (36%) earn $75,000 or more per year.

Government data users are also prolific users of various online technologies. Nine in ten (90%) have a high-speed home internet connection, three-quarters (74%) use the mobile web, 89% get political news online, 63% use social networking websites and 28% use Twitter or similar status update services. All these are significantly higher than for internet users who do not access government data online.

Interestingly, going online for data or information about government activities is not associated with greater or lesser levels of trust in government. Government data users are just as likely as internet users who do not use these services to say that they trust their federal or state government “always” or “most of the time”, although they are slightly more likely to say that they generally trust their local authorities. However, they do show significantly higher levels of disapproval for the job Barack Obama is doing as president—42% of government data users disapprove of the administration’s job so far, compared with 30% of other online adults. This may be due to the demographic composition of online government users. Men, whites and high-income Americans generally have higher levels of disapproval for Barack Obama, and these groups make up a comparatively large share of the government data user population.

Looking individually at the four activities that comprise our government data user definition, male internet users are more likely than online women to have visited any of the government data sites evaluated in our survey. Going online for this type of government information appeals to men in a way that the other e-government activities we measured in this survey do not—generally, men and women use online government services at a similar rate. 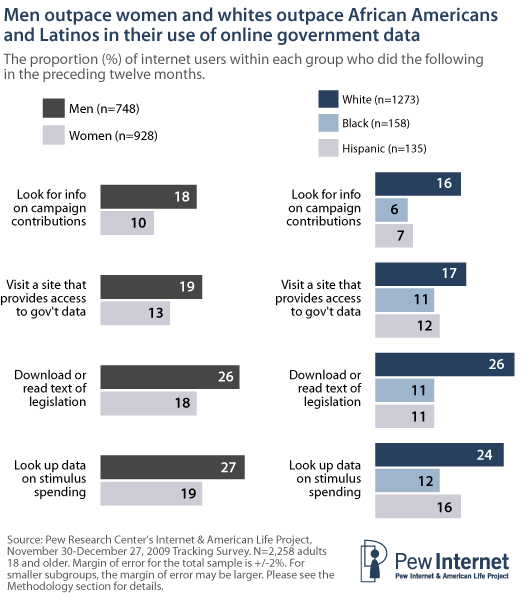 Among internet users, whites are also much more likely to have visited such websites in past twelve months compared with African-Americans or Latinos. The only exception is for sites such as data.gov that offer access to government data, for which there are no significant differences across racial boundaries.

Access to online government data is associated with positive attitudes towards the federal government’s openness and accountability, although this association depends heavily on party affiliation and political ideology

In addition to asking internet users about their engagement with online services oriented around government data, we also asked all adults (both internet users and non-users) whether they feel that the federal government is now more or less open and accountable compared with two years ago. 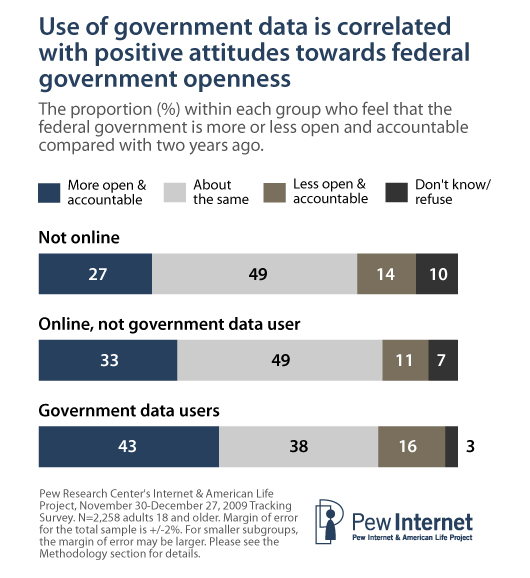 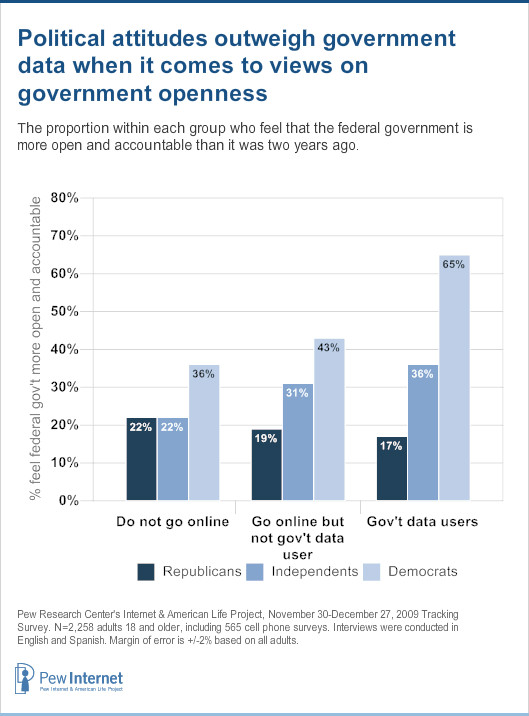