Text messaging explodes as teens embrace it as the centerpiece of their communication strategies with friends.

The mobile phone has become the favored communication hub for the majority of American teens.1

Cell-phone texting has become the preferred channel of basic communication between teens and their friends, and cell calling is a close second. Some 75% of 12-17 year-olds now own cell phones, up from 45% in 2004. Those phones have become indispensable tools in teen communication patterns. Fully 72% of all teens2 – or 88% of teen cell phone users — are text-messagers. That is a sharp rise from the 51% of teens who were texters in 2006. More than half of teens (54%) are daily texters.

Among all teens, their frequency of use of texting has now overtaken the frequency of every other common form of interaction with their friends (see chart below). 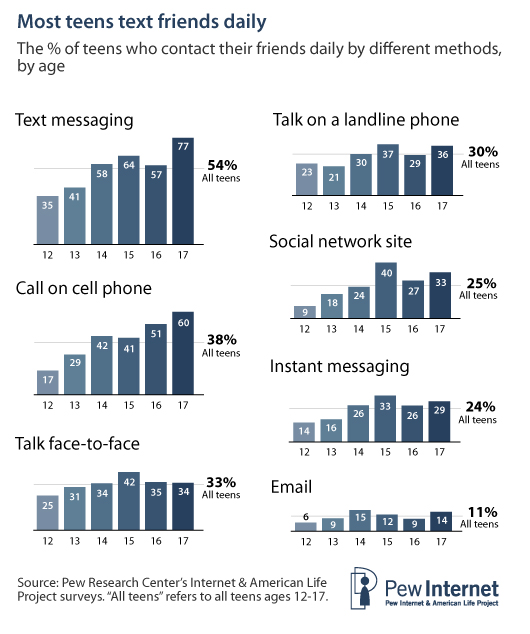 Fully two-thirds of teen texters say they are more likely to use their cell phones to text their friends than talk to them to them by cell phone.

Calling is still a central function of the cell phone for teens and for many teens, voice is the primary mode of conversing with parents.

Among cell-owning teens, using the phone for calling is a critically important function, especially when it comes to connecting with their parents. But teens make and receive far fewer phone calls than text messages on their cell phones.

As we see with other communicative technologies and applications, girls are more likely than boys to use both text messaging and voice calling and are likely to do each more frequently.

Girls are also more likely than boys to text for social reasons, to text privately, and to text about school work.

For parents, teens’ attachment to their phones is an area of conflict and regulation.

Parents exert some measure of control over their child’s mobile phone – limiting its uses, checking its contents and using it to monitor the whereabouts of their offspring. In fact, the latter is one of the primary reasons many parents acquire a cell phone for their child. However, with a few notable exceptions, these activities by parents do not seem to impact patterns of cell phone use by teens.

Most schools treat the phone as a disruptive force that must be managed and often excluded from the school and the classroom.

Even though most schools treat the phone as something to be contained and regulated, teens are nevertheless still texting frequently in class.

Cell phones help bridge the digital divide by providing internet access to less privileged teens. Still, for some teens, using the internet from their mobile phone is “too expensive.”

Teens from low-income households, particularly African-Americans, are much more likely than other teens to go online using a cell phone. This is a pattern that mirrors Pew Internet Project findings about adults and their cell phones.

Cell phones are seen as a mixed blessing. Parents and teens say phones make their lives safer and more convenient. Yet both also cite new tensions connected to cell phone use.

Parents and their teenage children say they appreciate the mobile phone’s enhancement of safety and its ability to keep teens connected to family and friends. For many teens, the phone gives them a new measure of freedom. However, some teens chafe at the electronic tether to their parents that the phone represents. And a notable number of teens and their parents express conflicting emotions about the constant connectivity the phone brings to their lives; on the one hand, it can be a boon, but on the other hand, it can result in irritating interruptions.

Teens who have multi-purpose phones are avid users of those extra features. The most popular are taking and sharing pictures and playing music:

The majority of teens are on family plans where someone else foots the bill.

Fully three-quarters of teen cell phone users (75%) have unlimited texting. Just 13 percent of teen cell phone users pay per message. Those with unlimited voice and texting plans are more likely to call others daily or more often for almost every reason we queried – to call and check in with someone, to coordinate meeting, to talk about school work or have long personal conversations. Teens with unlimited texting typically send and receive 70 texts per day, compared with 10 texts a day for teens on limited plans and 5 texts a day for teens who pay per message.

A relatively small number of teens have sent and received sexually suggestive images by text:

Further details about “sexting” via cell phones may be found in our recent Teens and Sexting Report.4

More details about cell phone use among teens and distracted driving maybe found in our earlier report Teens and Distracted Driving.5

New data forthcoming on Latino youth and their communication choices

Forthcoming from the Pew Hispanic Center, a sister project to the Pew Internet Project, is a new report about the ways young Latinos, ages 16 to 25, communicate with each other. This report will contain results based on a national survey of Hispanics conducted in the fall of 2009. Over 1,200 young Latinos were asked about the ways they communicate with each other, whether through text messaging, face-to-face contact, email or social network sites. This new forthcoming report is a follow-up to the report “Between Two Worlds: How Young Latinos Come of Age in America,” and will be available online at https://www.pewresearch.org/hispanic

Teens and Mobile Phones
Text messaging explodes as teens embrace it as the centerpiece of their communication strategies with friends.
Acknowledgements Introduction: Why study mobile phones? Chapter One: The basics of how teens acquire and use mobile phones Chapter Two: How phones are used with friends - What they can do and how teens use them Chapter Three: Attitudes towards cell phones Chapter Four: How parents and schools regulate teens’ mobile phones