Telephone interviews conducted in Spanish and English, on cellphones and on landlines

A combination of landline and cellular random digit dial (RDD) samples was used to represent all adults who have access to either a landline or cellular telephone. Both samples were provided by Survey Sampling International, LLC (SSI) according to PSRAI specifications. Numbers for the landline samples were selected using standard list-assisted RDD methods from active blocks (area code + exchange + two-digit block number) that contained three or more residential directory listings. The cellular samples were not list-assisted, but were drawn through a systematic sampling from dedicated wireless 100-blocks and shared service 100-blocks with no directory-listed landline numbers.

New sample was released daily and was kept in the field for at least five days. The sample was released in replicates, which are representative subsamples of the larger population. This ensures that complete call procedures were followed for the entire sample.  At least 10 attempts were made to complete an interview at sampled households. The calls were staggered over times of day and days of the week to maximize the chances of making contact with a potential respondent. Each household received at least one daytime call in an attempt to find someone at home.

In each contacted household in the landline sample, interviewers asked to speak with the youngest male currently at home. If no male was available, interviewers asked to speak with the youngest female at home. This systematic respondent selection technique has been shown to produce samples that closely mirror the population in terms of age and gender. For the cellular sample, interviews were conducted with the person who answered the phone. Interviewers verified that the person was an adult and in a safe place before administering the survey. Cellular sample respondents were offered a post-paid cash incentive for their participation. All interviews completed on any given day were considered to be the final sample for that day.

Non-response in telephone interviews produces some known biases in survey-derived estimates because participation tends to vary for different subgroups of the population, and these subgroups are likely to also vary on questions of substantive interest. In order to compensate for these known biases, the sample data are weighted in analysis.

A two-stage weighting procedure was used to weight this dual-frame sample for each weighting. A first-stage weight of 0.5 was applied to all dual-users to account for the fact that they were included in both sample frames.  All other cases were given a first-stage weight of 1. The second stage of weighting balanced sample demographics to match population parameters. The sample was balanced to match population parameters for sex, age, education, race, Hispanic origin, region (U.S. Census definitions), population density, and telephone usage. The basic weighting parameters came from a special analysis of the Census Bureau’s 2007 Annual Social and Economic Supplement (ASEC). The population density parameter comes from 2000 Census data.  The cell phone usage parameter came from an analysis of the July-December 2006 National Health Interview Survey.

Table 1 below is the full disposition of all sampled telephone numbers. At PSRAI it is calculated by taking the product of three component rates: 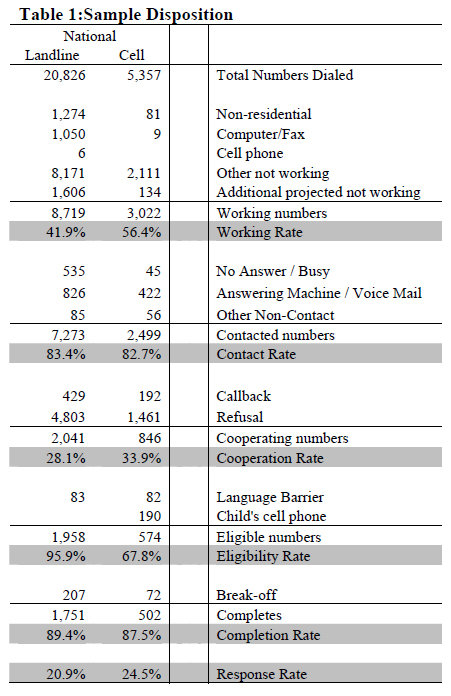