The chart below shows growth rates in broadband adoption in recent years. 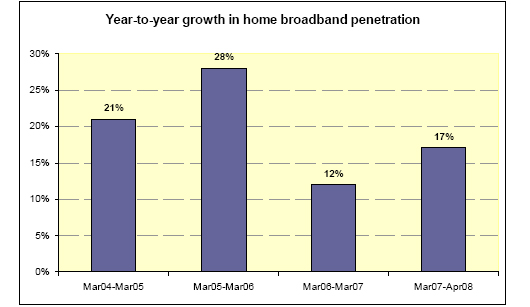 This highpoint in our surveys for home broadband adoption also marks a low in the use of dial-up as a way to access the internet. Just 10% of American adults say they use dial-up internet connections at home to go online. 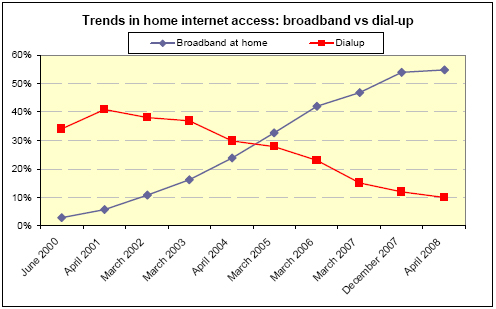 Although growth in broadband adoption from 2007 to 2008 was comparable to the 2006-2007 timeframe, the sources of recent growth differ from prior years. Over the past year, growth in broadband adoption at home was strong among lower-middle income Americans, and those over the age of 50. However, several groups that had shown strong rates of broadband uptake in past years slowed in the 2007-2008 timeframe. Specifically: 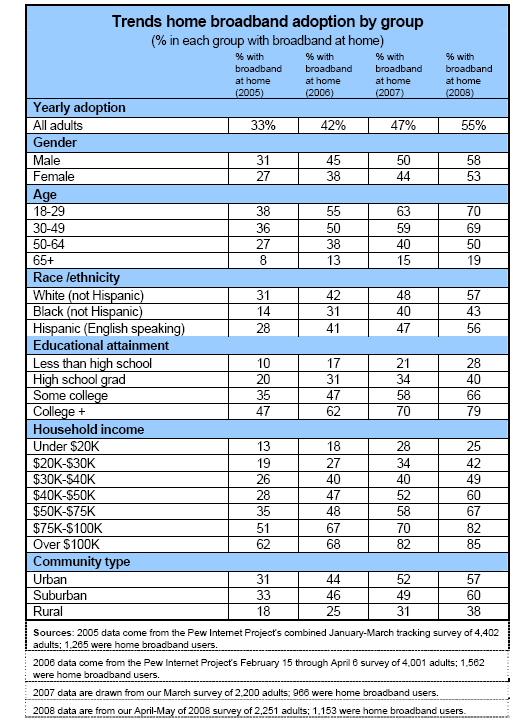 These slow or flat growth rates were compensated by faster growth in broadband adoption in two sizable (and not mutually exclusive) groups of Americans:

It is also worth noting that some 28% of respondents who have not completed high school said they have broadband at home in 2008, a 33% increase relative to 2007. This growth rate applies to a group that made up 13% of the sample. 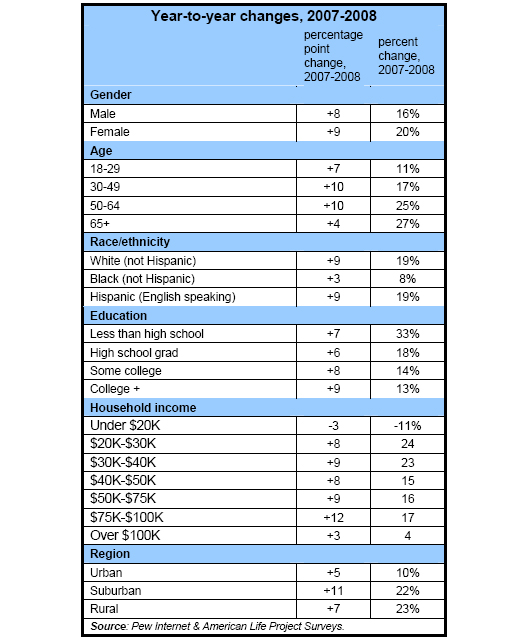 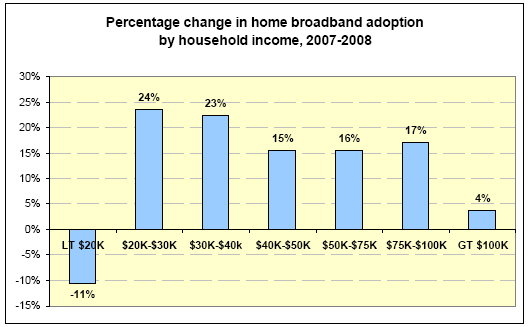 Fixed wireless has greater role in the home broadband market.

When asking people about their online connection speed, the survey question reads: “Does the computer you use at home connect to the internet through a dial-up telephone line, or do you have some other type of connection, such as a DSL-enabled phone line, a cable TV modem, a wireless connection, or a T-1 or fiber optic connection?” This yields not only whether people have broadband connections at home, but also the type of connection they use. 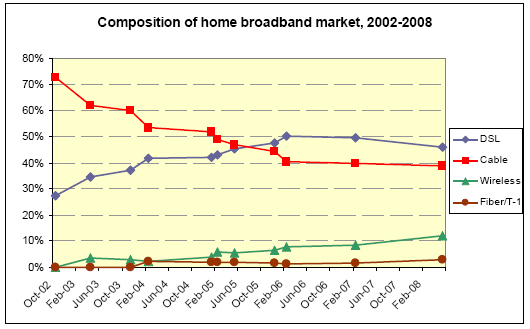 A handful (2%) of home broadband users has fiber optic connections.

When comparing the type of broadband connections users choose by the kinds of places people live, some rural users rely on satellite – perhaps because they lack wired infrastructure where they live. By contrast, 4% of suburban broadband users say they have fiber to the home – and this makes up the strong majority of all fiber connections at home reported by respondents in this survey.

In the past, our surveys have asked what people pay per month for internet access; we last did this in December 2005. The April 2008 survey had different question wording to reflect that some people have internet service bundled with phone or cable service and, if so, most likely have a single bill for several services. Thus, the question wording in the April 2008 survey was:

Overall, home broadband users reported that their monthly payment for internet service was $34.50 – 4% less than the figure of $36 per month reported in December 2005.3 This decline in monthly broadband bills is half the rate (8%) reported over the February 2004 to December 2005 timeframe. 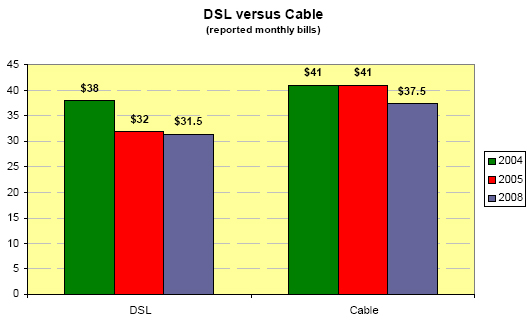 For dial-up users, the story was different. Their monthly access bill was $19.70 – 9% higher than the figure of $18 that dial-up users reported in December 2005.

Here is how monthly costs differ for premium versus non-premium services:

People are likely to cite faster access speeds as the thing they like most about broadband, but few people actually know the speed of their connections.

Broadband users clearly like the faster access to content on the internet that their home high-speed connection affords them. When asked what they like most about having a broadband connection, 75% of home high-speed users cited faster access or greater speed. Other uses cited as the feature valued most included the “always on”’ connection (cited by 6% of broadband users), convenience (5%), job-related tasks (4%), downloading files of all types (3%), and finding educational materials (2%).

This is not to say that broadband users don’t value specific applications listed above (and others such as gaming and entertainment) that a high-speed connection enables. It is just that the broad notion of faster access speeds came to mind most often for respondents.

Next: Analysis of Non-Broadband Users
← Prev Page
Page1Page2You are reading page3Page4Page5Page6
Next Page →

Home Broadband 2008 Acknowledgements
Broadband Adoption in the United States
IntroductionFixed wireless has greater role in the home broadband market.A few suburban broadband users are starting to get fiber at home, while some rural broadband users rely on satellite for broadband.Broadband is 4% cheaper than in 2005.Some broadband users pay for premium services.People are likely to cite faster access speeds as the thing they like most about broadband, but few people actually know the speed of their connections.
Analysis of Non-Broadband Users The Online Behavior of Broadband Users Methodology