Some 55% of adult Americans now have broadband internet connections at home, up from 47% who had high-speed access at home last year at this time. From the March 2006 to March 2007 timeframe, home broadband adoption grew from 42% of Americans to 47%. 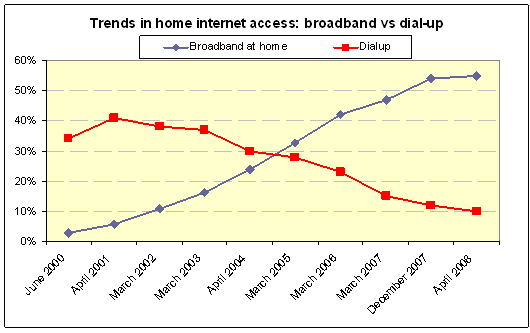 Growth in broadband adoption was flat among the poor and African Americans.

Broadband growth was strong among older and lower-middle income Americans, as well as rural Americans.

Nearly one-third of home broadband users have a premium broadband service that gives them a faster connection to the internet.

When asked whether they subscribe to a premium service that gives them a faster broadband connection or have basic service, here is what home broadband users say:

Monthly broadband bills are 4% lower in May 2008 than at the end of 2005, but monthly dial-up bills have risen.

Non-broadband users cite a number of reasons for not using the service – including availability, price, and lack of interest.

When asked specifically what it would take them to get them to switch to broadband:

Non-internet users represent a large pool of potential broadband users, but many are just not interested in getting online.

When asked why they don’t use the internet:

One-third (34%) of all internet users have connected to the internet using a WiFi connection at someplace other than home or work.

Among internet users who have gone online “on the go” from some place other than home or work:

As broadband access becomes differentiated – by either premium service or WiFi access on the go – so does user behavior.

The 34% of online users who have taken advantage of “on the go” access and the 29% broadband subscribers who subscribe to faster premium services are more active online than typical broadband users. When looking across a range of 14 different online activities:

It is not too surprising that additional on-ramps to the internet are associated with heavier use. Nonetheless, particularly with respect to “on the go,” the results show that a WiFi-enabled laptop has added “always connected” wireless access to the “always on” broadband connection. 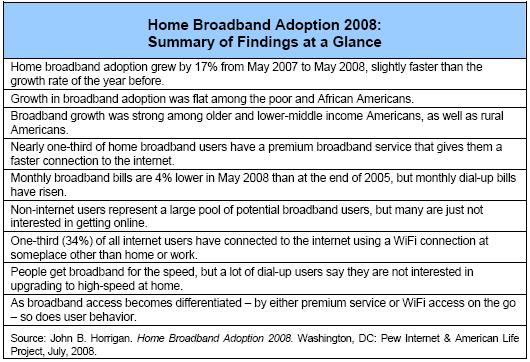