Research by the Pew Internet Project in 2002 showed how the “always on” broadband connection at home opens the door to deeper engagement with the internet.11 John B. Horrigan, The Broadband Difference: How online Americans’ behavior changes with high-speed Internet connections at home. Pew Internet & American Life Project, June 2002. Available online at: https://www.pewresearch.org/internet/PPF/r/63/report_display.asp.] Early broadband adopters did a wider range of activities online and more frequently than the then-majority of dial-up users. This was to be expected from upscale early adopters, as many no doubt got broadband at home because they had high demand for digital information.

However, this pattern of more intense of online resources among broadband users continued as the technology disseminated more widely. For news consumption, for instance, high-speed connections tend to draw users (especially young ones) away from traditional as print newspapers and to the internet for news.12 The broadband pull, in other words, runs both ways. Those with high demand for internet applications get fast connections and do more with them. It is also true that many who get broadband at home are drawn to online alternatives available with their “always on” connection, sometimes as a substitute for offline resources.

The technology to access the internet has evolved since broadband first began to make inroads among consumers. WiFi technology allows users high-speed wireless access to the internet, typically using a laptop computer, although a range of handheld devices increasingly can connect to cyberspace using WiFi. Additionally, broadband providers no longer simply offer a fast online connection. Premium services offer higher speeds for those willing to pay.

This section examines the online behaviors of those who pay for premium broadband services at home or use laptops to connect to the internet with WiFi. Whereas having a broadband connection was once the marker of deeper engagement with cyberspace, now other access options are associated with heavier use of cyberspace.

Our report “Mobile Access to Data and Information” found that, as of December 2007, 41% of adult Americans had accessed the internet from someplace other than home or work using a wireless laptop connection or a handheld device such as a cell phone or personal digital assistant.13 Narrowing the set of “on the go” users only to those who have accessed the internet using a laptop computer and a wireless connection, the December 2007 survey showed that 27% of American adults had used this means to go online.

Our April 2008 survey shows a similar level of wireless online access using a laptop computer, with 25% of Americans saying they had done this – statistically indistinguishable from the December survey. This comes to 34% of internet users who have logged on using a WiFi connection and a laptop away from home or work.

Most of the time, this wireless access occurs in public places; some 58% of those who have connected to the internet in a place other than home or work using a wireless laptop connection say  they use access points in airports, coffee shops, or restaurants. Among those using WiFi in public places, 64% say they mostly use free WiFi services, 4% say they mostly pay for such services, with the remainder (32%) saying they use a mix of free and paid services.

Those who subscribe to premium services or use WiFi away from home or work to access the internet do more online.

Similar to the technique employed in past reports on broadband adoption, the analysis below examines whether intensity of online use differs for “on the go” and premium service users relative to all broadband users. The survey queried online users about 14 different online activities and the analysis below examines whether the different classes of users do a greater range of online activities than home broadband users as a whole. 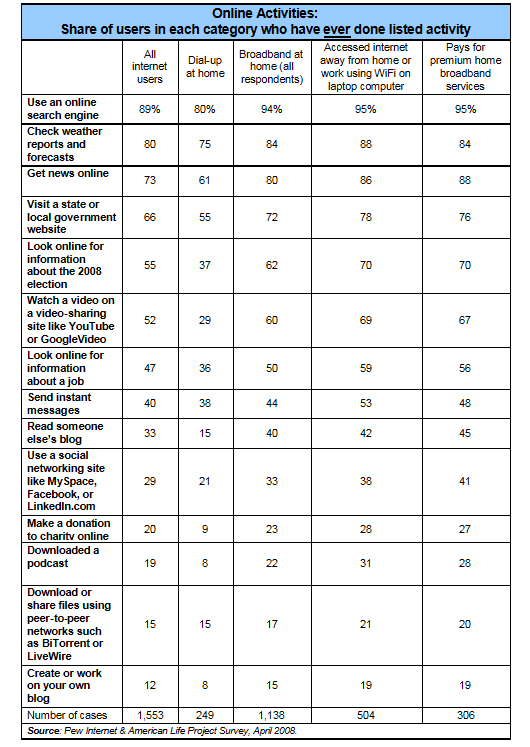 The following table reports responses to questions that ask respondents if they “yesterday” did a specific activity. This yields a portrait of what users in a specific category do on a typical day online. 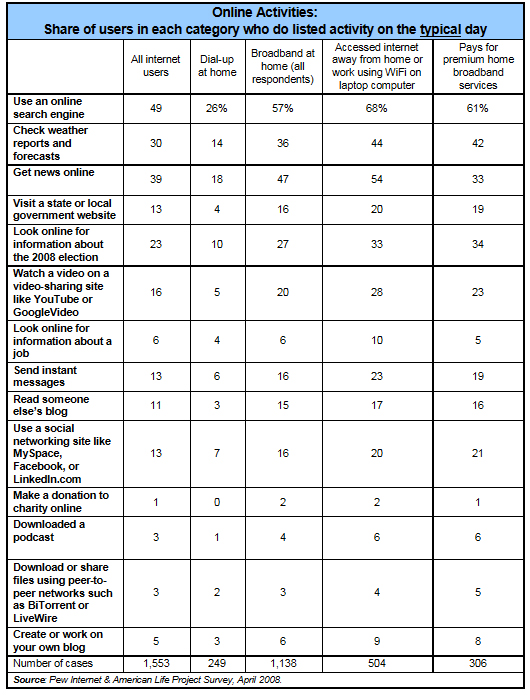 The following table summarizes the relative intensity of the different classes of users based using the average and median for the total number of activities users do out of the 14 listed – both for the total ever done and the total done on the typical day.

None of this is a surprise; in one instance, users have an additional on ramp to the internet with a wireless connection and in the other they have a faster one, as they say they pay for faster premium service.

At the same time, the results are evidence of a link between new ways of access and deeper engagement with the internet. In particular, the sizable share of internet users who have connected to the internet with a WiFi-enabled laptop have added “always connected” wireless access to their “always on” broadband connection.

As to the demographic profiles of these two classes of internet users, the table below shows that they are younger and better educated than average. 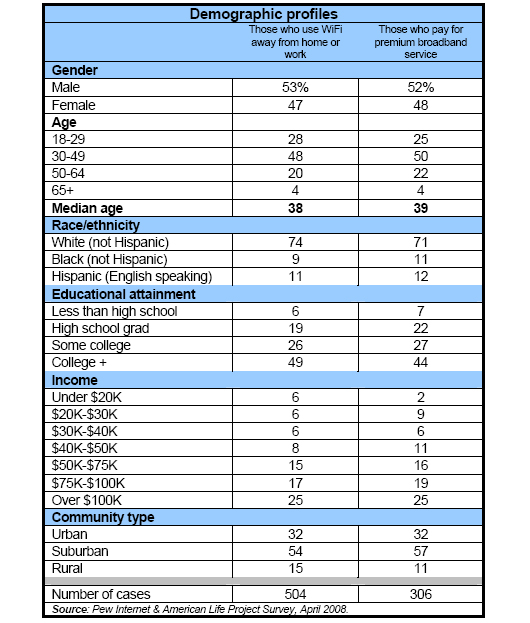