With more than half of Americans now with broadband and the number of dial-up users dwindling, it is worth asking those still going without broadband at home. The reasons why many Americans don’t have broadband fall into several non-mutually exclusive categories:

Some 62% of dial-up users say they aren’t interested in switching to broadband.

The April 2008 survey repeated a question posed several times in the past that asked dial-up user if they would like to have a faster broadband connection – or whether that is something they are not interested in. Just more than one-third (36%) say they would be interested in a switch, with 62% saying they would not be interested in changing to broadband. This figure hasn’t changed much since October 2002.

Many dial-up users say that they can’t afford broadband.

When pressed as to what might lure them into the ranks of home high-speed users, a plurality of dial-up respondents cited price. One-third (35%) of dial-up users said that they would switch to broadband if the price became more affordable and, as noted above, there remains a sizable gap in what dial-up users pay monthly for online access and what broadband users pay.

Affordability matters: 35% of dial-up users say they would switch to broadband if the price fell.

Lack of broadband availability looms in the mind of some dial-up users.

When both dial-up and non-internet users are asked generally whether “high-speed internet service is available in your neighborhood from a telephone company, cable company or any other company,” one-quarter (24%) say “no” and 13% respond that they do not know if it is available.

Whether framed in general terms to all non-broadband users or more narrowly only to dial-up users about whether availability is a barrier to switching, users’ respondents must be interpreted in the proper context. Users may report incorrectly about whether broadband is available where they live; in fact, broadband service is available everywhere a home can receive a satellite signal, although such service is typically more costly than and not as fast as DSL or cable service. Non-internet users in particular may be unreliable sources for information about the availability of a technology they do not use.

Moreover, 15% of dial-up users in rural areas say having the service available where they live would prompt a switch to broadband; this compares to the 10% figure for all respondents.

Non-internet users – one-quarter of adults – represent the largest group of those without broadband.

Our April 2008 survey recorded 73% of American adults as internet users, meaning 27% of adults in the United States do not use the internet. Age and income are two factors that stand out when looking at non-internet users.

33% of non-internet users say they are not interested in the internet.

Still, one-third (33%) of non-internet users say they are simply not interested in the internet, with another 12% saying they don’t have access. Some 9% of non-users say the internet is too difficult or frustrating for them and just 7% say it is too expensive.

The following table presents a demographic profile of online users versus non-internet users and clearly shows difference among these groups, as non-users are older and less wealthy than home dial-up or broadband users. 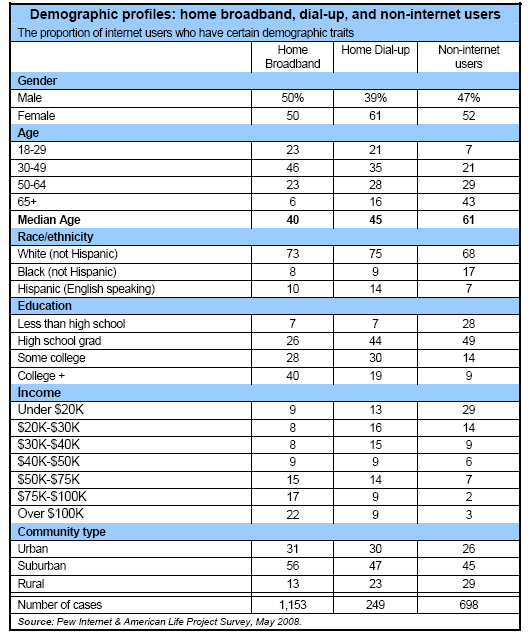 As powerful as these associations are, they are not the only things at play in broadband adoption decisions. People’s attitudes about information technology are also important. An older person may love to tinker with technology and enjoy the “always on” information pipeline that broadband offers. A person in a low-income household may be willing to allocate scarce discretionary funds to broadband – if he feels the connectivity offers something of value.

A question asked in a November 2007 survey about how people view the benefits to personal productivity from information technology shows the role attitude can play in connection choices. The survey asked respondents to say how strongly they agree with the following statement: “I believe I am more productive because of all of my electronic devices.”

A majority (67%) of broadband users view electronic devices, to some extent, as an aid to personal productivity, while a minority of dial-up users (46%) sees modern gadgetry in this way.

This suggests that people’s age and income are not the only things behind the broadband choice. How people view the productive potential of information technology is also relevant – and not everyone sees this potential in the same way.

With just more than one-third of broadband users saying they would like to get broadband, one might expect some to look for ways to connect via high-speed outside the house. As noted, 25% of all adults (or 34% of internet users) have gotten online away from home or work using a laptop and a WiFi wireless connection.

WiFi is not the only wireless means of accessing the internet. Increasingly, handheld devices such as cell phones or personal digital assistants (such as Blackberries or iPhones) offer a pathway to the web. Some 39% of internet users say they have used a handheld device to go online – the figure is 41% for home broadband users and 36% for home dial-up users. Given the dwindling number or home dial-up users, this means that some 86% of those who use a handheld to access the internet are broadband users.

Although some cell phone networks today are capable of transmission rates of 200 kilobits per second (the FCC-defined threshold for a “first generation” broadband), it is difficult, if not impossible, to determine how many.8 And even 3G services that might reach 700 kps are below the threshold for “basic broadband” service.9 These figures suggest that the few dial-up users who do connect to the internet with a handheld device are experiencing fast speeds, so that handheld online access cannot be seen as a substitute for having a high-speed internet connection at home.

Next: The Online Behavior of Broadband Users
← Prev Page
Page1Page2Page3You are reading page4Page5Page6
Next Page →