These findings come from a survey of 2,200 adult Americans conducted in February and March of 2007.

After exhibiting relatively strong growth between early 2005 and early 2006, home broadband adoption in 2006-2007 grew at its slowest rate in recent years. As of March 2007, 47% of adult Americans say they have a high-speed connection at home, up from 42% in early 2006. This 12% year-to-year growth rate is much lower than the 40% rate in the previous period. 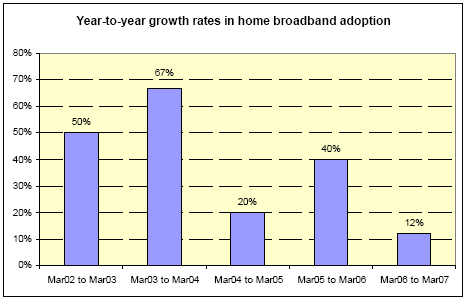 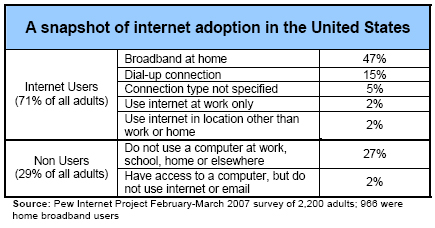 Despite relatively slow growth on a percentage basis compared with previous years, the number of home broadband users in early 2007 is now roughly as large (on a percentage basis) as the entire universe of internet users in the first year of the Pew Internet Project’s surveys of online use. In June 2000, 48% of respondents reported going online via any type of connection to check email or access the Internet, compared with the 47% who have a home broadband connection now. 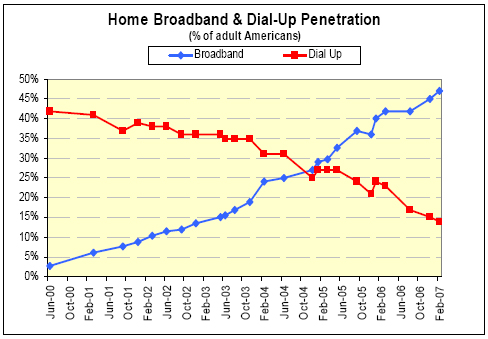 Historically, high-speed internet adoption has been concentrated among the young, educated and relatively well-off. This trend held to form in our 2007 survey, as several historically broadband-heavy groups continue to have broadband usage adoption well above the overall average for adult Americans. In particular, broadband penetration remains high among Americans ages 18-49, those with annual household incomes over $75,000 and college graduates. 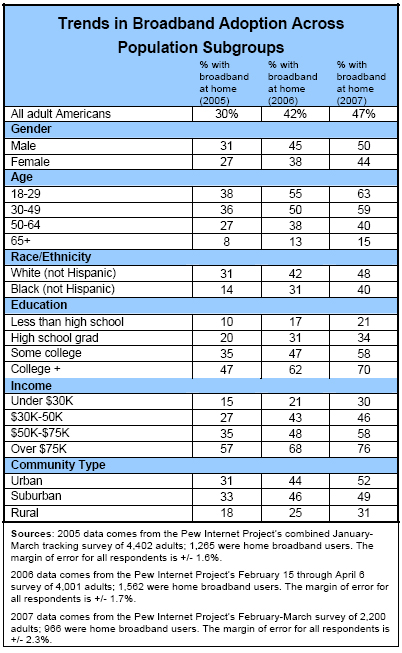 The 2005-2006 time period witnessed strong growth in broadband adoption across numerous demographic groups. As might be expected given the comparatively modest overall growth in broadband adoption for 2006-2007, growth rates among most population subgroups during the current time period were relatively modest by comparison. However, some demographic groups exhibited rapid broadband growth in 2006-2007 when compared with the adult population as a whole (year-to-year growth rates noted in parentheses):

Americans with annual household incomes under $30,000 are the only major demographic group for which broadband growth rates in 2006-07 (43%) met or exceeded those seen in 2005-06 (40%). Continued strong growth in broadband penetration among low-income households is particularly important both because of the size of this segment (25% of respondents in our February 2007 survey reported annual household incomes of under $30,000 per year) and because these lower income households have long been among the most under-represented groups in home high-speed adoption. 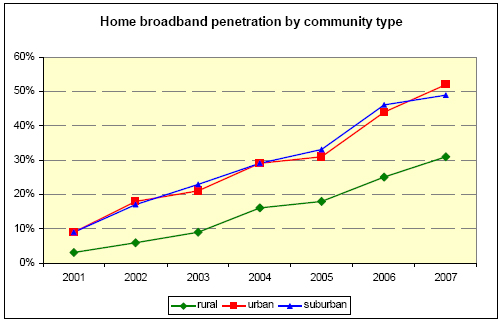 The gap in broadband penetration between rural and urban/suburban residents is comprised of two elements. As with African-Americans and whites, the first element is the low level of overall internet usage among rural residents—73% of urban and suburban residents use the internet at least occasionally, while 60% of rural adults are internet users. 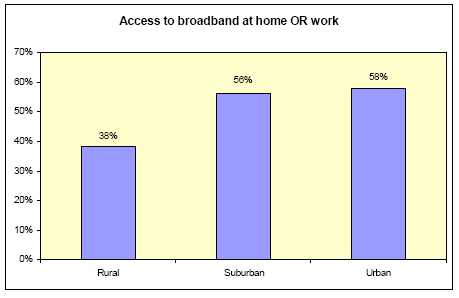 Statistical analysis of the survey data controlling for factors such as income, education and age shows that both race and geography are significant factors in predicting overall internet usage. In predicting broadband adoption among internet users, however, the impact of race is negligible—African-Americans and whites with similar demographic characteristics show similar levels of broadband usage.

At the same time, the impact on broadband usage of living in a rural area is negative and significant. While our 2007 survey did not specifically ask respondents whether broadband was available in their area, previous studies have pointed to the lack of infrastructure in rural areas as a contributing factor in the slow growth in adoption of rural broadband, a theory that is consistent with the above findings.4

From June through October 2006, the Pew Internet Project and Pew Hispanic Center surveyed 6,016 Hispanic adults in order to gauge internet usage habits among Latinos.5 Respondents were allowed to complete this survey in either English or Spanish, thus painting a more comprehensive portrait of the Latino community than our traditional English-only tracking survey.  As a result, this report uses findings from our 2006 Latinos survey in lieu of data collected from “English-only” Latinos in our February-March 2007 survey. Key findings relating to broadband usage among Latinos include:

Previous Pew Internet Project research has highlighted the strong relationship between high-speed internet access and the richness and intensity of the online experience.  Compared with individuals with a dialup internet connection, broadband users use the internet more regularly and engage more frequently in a variety of online activities.6

Our February-March 2007 survey shows this phenomenon proceeding apace. As the table below indicates, 65% of home broadband users go online from home at least once per day to use the internet or check email, compared with 40% for dialup users. 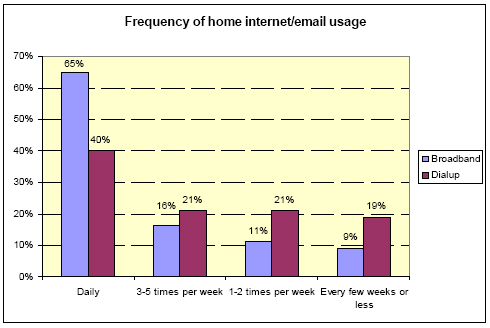 In addition to using the internet more frequently than individuals with dialup access, broadband users also participate in a wider range of online activities. It is perhaps not surprising that broadband users exhibit greater rates of participation in bandwidth-intensive activities, such as internet telephony, that are cumbersome and time consuming at dialup speeds. What is particularly notable is that broadband users are also more likely than dialup users to take part in several comparatively low tech (i.e. less bandwidth-intensive) online activities such as searching for information on Wikipedia or reading online news sites. 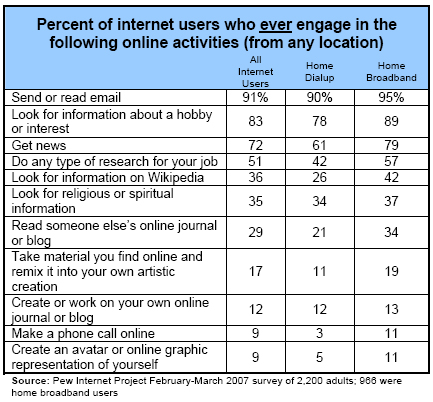 This broadband effect does not hold true across all of the online activities studied in our March 2007 survey. For instance, demographically similar broadband and dialup users exhibit little difference with respect to ever having looked up religious or spiritual information, or ever having worked on their own online journal or blog. For most activities, however, the presence of a home broadband connection is a key explanatory variable (controlling for demographic and socio-economic factors) in predicting whether a given individual has ever engaged in that activity.7 This analysis does not necessarily imply that broadband “causes” increased online engagement; those interested in doing certain activities may get broadband in order to pursue those interests. However, a high-speed, “always on” connection clearly allows users to engage frequently in a wider range of online activities than dialup users. 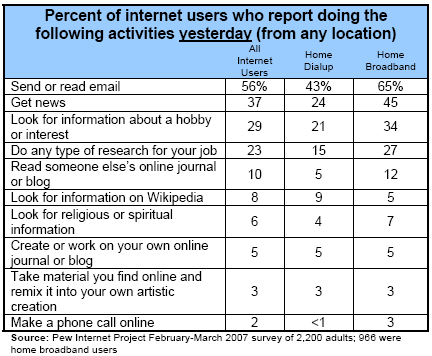 Next: Methodology and Data
← Prev Page
You are reading page1Page2
Next Page →