The Pew Internet Project is a nonprofit, non-partisan initiative of the Pew Research Center that explores the impact of the Internet on children, families, communities, the work place, schools, health care, and civic/political life.  Support for the project is provided by The Pew Charitable Trusts. More information available at: https://www.pewresearch.org/internet

SP1         Which of the following best describes how spam affects your life on the Internet?

SP2      We’d like to know if unsolicited email, or spam, has affected you in any of the following ways.  Has spam…? 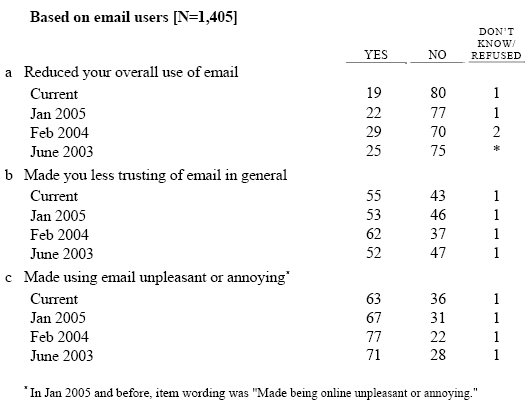 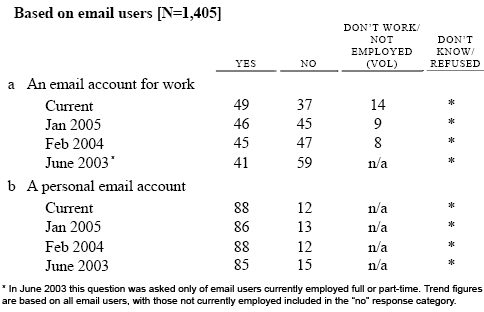 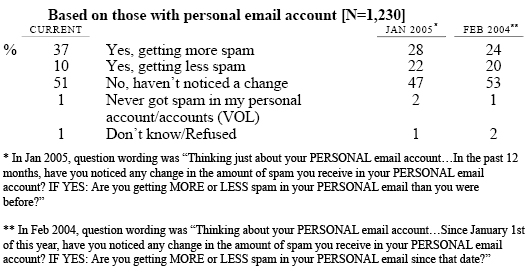 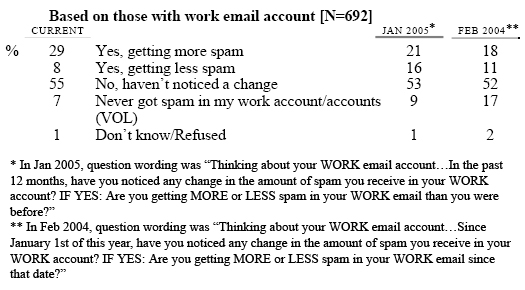 SP18     We’d like to know if you have ever done the following things to keep spam out of your inbox.  Have you ever…? 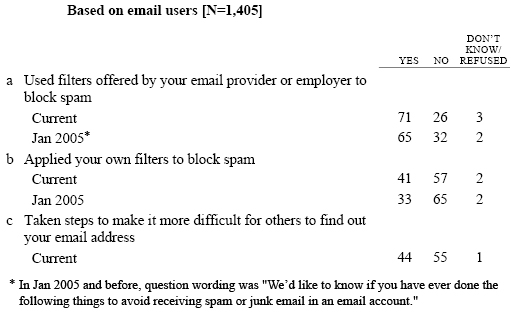 SP19     How often do you check your spam folder for email messages that might have been sent there by mistake?  Do you do this…

SP20     How often do you unintentionally open an email message without realizing it was spam?  Do you do this…

SP3      Thinking about all of the times you’ve received unsolicited email, have you ever…? 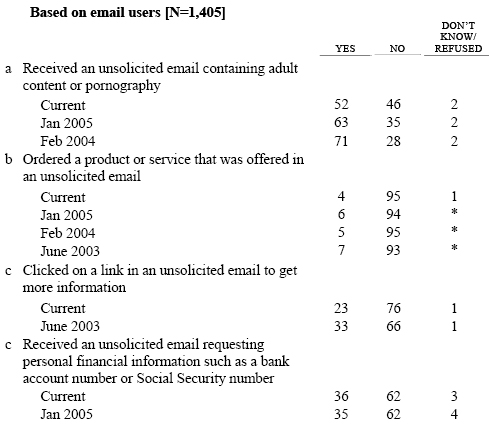 This report is based on the findings of a daily tracking survey on Americans’ use of the Internet. The results in this report are based on data from telephone interviews conducted by Princeton Survey Research Associates between February 15 to March 7 2007, among a sample of 2,200 adults, 18 and older.  For results based on the total sample, one can say with 95% confidence that the error attributable to sampling and other random effects is plus or minus 2.3 percentage points.  For results based Internet users (n=1,492), the margin of sampling error is plus or minus 2.8 percentage points.  In addition to sampling error, question wording and practical difficulties in conducting telephone surveys may introduce some error or bias into the findings of opinion polls.

Non-response in telephone interviews produces some known biases in survey-derived estimates because participation tends to vary for different subgroups of the population, and these subgroups are likely to vary also on questions of substantive interest. In order to compensate for these known biases, the sample data are weighted in analysis. The demographic weighting parameters are derived from a special analysis of the most recently available Census Bureau’s March 2006 Annual Social and Economic Supplement. This analysis produces population parameters for the demographic characteristics of adults age 18 or older, living in households that contain a telephone. These parameters are then compared with the sample characteristics to construct sample weights. The weights are derived using an iterative technique that simultaneously balances the distribution of all weighting parameters.

PSRAI calculates a response rate as the product of three individual rates:  the contact rate, the cooperation rate, and the completion rate.  Of the residential numbers in the sample, 76 percent were contacted by an interviewer and 41 percent agreed to participate in the survey.  Eighty-seven percent were found eligible for the interview.  Furthermore, 94 percent of eligible respondents completed the interview.  Therefore, the final response rate is 29 percent.