The volume of spam is growing in Americans’ personal and workplace email accounts, but email users are less bothered by it.

Spam continues to plague the internet as more Americans than ever say they are getting more spam than in the past. But while American internet users report increasing volumes of spam, they also indicate that they are less bothered by it than before. Users have become more sophisticated about dealing with spam; fully 71% of email users use filters offered by their email provider or employer to block spam. Users also report less exposure to pornographic spam, which to many people is the most offensive type of unsolicited email. Spam has not become a significant deterrent to the use of email, as some observers speculated it might when unsolicited email first began flooding users’ inboxes several years ago. But it continues to degrade the integrity of email. Some 55% of email users say they have lost trust in email because of spam. 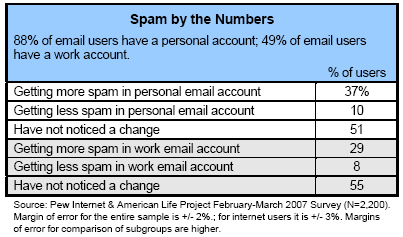 These are the highlights of a new phone survey about spam that was conducted between February 15 and March 7, 2007, among a nationally representative sample of 2,200 American adults. In the sample 1,405 of the respondents were email users and the margin of error on this group is plus or minus 3 percentage points.

The percentage of email users who report getting less spam has decreased over the last three years to just 10% of email users. About half of email users have not noticed a change in their email inboxes, which is similar to earlier survey findings.

Despite increased volumes of spam for some people, American internet users seem somewhat less bothered by spam than before. The Pew Internet & American Life Project first began tracking users’ behavior and attitudes toward spam in June 2003. At that time, when we first asked internet users how spam affected their life on the internet, 25% of users said spam was a big problem for them. Three and a half years later, the percentage of users who say spam is a big problem has dropped to 18%.

On the positive side, the percentage of users who say spam is not at all a problem has risen from 16% to 28%. And the portion of email users who take the middle ground, describing spam as an annoyance but not a big problem, hovers at about half (51%) down from 57% in 2003.

There appear to be several reasons fewer people say that spam is a big problem for them. First, the volume of most offensive kind of spam has decreased. And second, people are becoming more knowledgeable about spam, and they know better how to handle it.

There are nuances of differences among respondents, depending on their age and education, on their veteran internet user status, and on their frequency and purpose of email use. Internet users under the age of 50 are more likely than older users to say that spam is annoying. Two-thirds of college graduate internet users are annoyed by spam, compared with 45% of those with less education. Those with accounts both work and personal accounts are more annoyed with spam than those with only one type of account.

More details are in the chart below. 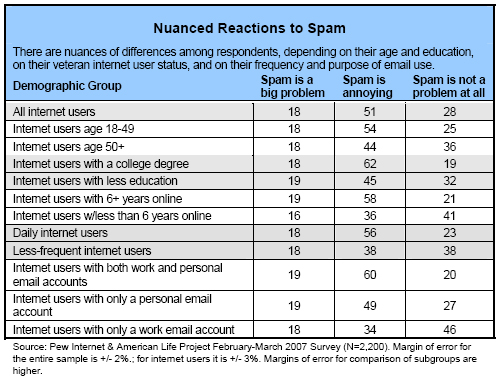 Most email users have always been confident about being able to identify spam. When we first asked in 2003 how email users identify spam, almost two-thirds, 63%, said “I know it right away when I see it.” Most of the rest, 34%, admitted spam was sometimes hard to distinguish from other email.

In this survey, when probing the issue in a slightly different way, we found that more users have become savvier about spam. Just over two thirds of emailers, 68%, say they almost never unintentionally open an email message without realizing it was spam. About a quarter, 27%, say they do that once in a while, and only 5% say they do it often.

Users increasingly apply filters to keep spam out of their inboxes. Currently, 71% of email users say they use filters provided by their email providers or employers, up from 65% two years ago. Some 41% say they apply their own filters, up from 33% two years ago.4 Further, 44% of email users say they have taken steps to make it more difficult for others to find their email address.

Just over half of email users let it go at that. Some 51% say they check their spam folders at least once in a while.  But 46% say they check it almost never or not at all.

In addition, users increasingly behave smartly with respect to spam.  Fewer than one quarter, 23%, say they have clicked on a link within a spam message in order to get more information, down from 33% in 2003. And only 4% of email users admitted to action that keeps the spam industry viable, which is ordering a product or service from an unsolicited email. This number has always been low; it was 7% in 2003, 5% in 2004, and 6% in 2005.

What Spam Means to the Institution of Email

When we first wrote about spam four years ago, we highlighted survey results that suggested spam was threatening at least some email users’ overall willingness to keep using electronic communication.5 The Federal Trade Commission also expressed concern about the long-term fate of email as notable numbers of Americans objected to spam.

Not surprisingly, the people who are most likely to report reduced email use are those who say spam is a big problem for them. Among the 18% of email users who say spam is a big problem, about one-third (37%) say that spam caused them to use email less. Only 15% of other email users, who are less affected by spam, say that spam has decreased their use of email.

The other side of the spam story, however, is that spam continues to take a toll on the integrity of email. In 2003, over half of email users, 52%, said that spam has made them less trusting of email in general. That sensibility is largely unchanged. In 2004, 62% of email users said spam made them less trusting of email, 53% agreed in 2005, and 55% agree now.

Again, loss of trust is significantly greater among the fifth of email users who say they consider spam a big problem. Some 82% of this minority says spam has made them less trusting of email in general, compared with 58% of those who are just annoyed by spam, and the 35% who don’t consider spam a problem at all.

While email users report the volume of pornographic spam has decreased, they report no change in the volume of another troubling form of spam, phishing, which is an email designed to trick someone into revealing personal financial information. In January 2005, we first asked email users if they had received unsolicited email requesting personal financial information such as a bank account number or Social Security number. At that time, 35% of respondents answered yes, a figure that remains almost unchanged, at 36%, today.

Spam 2007
The volume of spam is growing in Americans’ personal and workplace email accounts, but email users are less bothered by it.
About Us, Methodology