Home broadband adoption grew by 40% from March 2005 to March 2006, twice the growth rate of the year before.

The number of Americans who have broadband at home has jumped from 60 million in March 2005 to 84 million in March 2006 – a leap of 40%.  This is a substantial increase in the rate of broadband adoption compared with the previous year. A significant part of the increase is tied to internet newcomers who have bypassed dial-up connections and gone straight to high-speed connections. This is a striking change from the previous pattern of broadband adoption.

Growth in broadband adoption has been very strong in middle-income households, and particularly fast for African Americans and those with low levels of education.

48 million internet users have posted content to the internet and the large majority of them are home broadband users.

User-generated content is not just for a certain class of high-speed internet users.

Voice over internet protocol (VoIP) services are at the early stages of consumer acceptance, with 3% of online users saying they use a VoIP service at home. VoIP awareness has shot up 86% since early 2004.

One other development tied to the expansion of broadband in American homes is the emergence of phone services that run over high-speed internet connections.2

People get broadband for the speed, but a lot of dial-up users say they are not interested in upgrading to high-speed at home.

The price of broadband has dropped in the past two years and the availability of broadband providers to consumers has changed modestly. 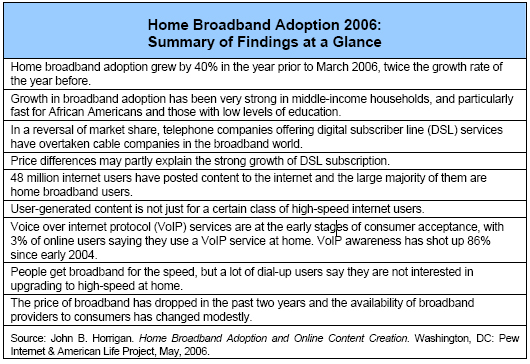