Most online Americans who are single and looking for dates have used the internet to pursue their romantic interests and millions more Americans know people who have tried and succeeded at online dating.

In a new survey by the Pew Internet & American Life Project, there are two central findings that illustrate how important the internet has become for those seeking romance in 21st Century America: First, among the relatively small and active cohort of 10 million internet users who say they are currently single and looking for romantic partners, 74% say they have used the internet in one way or another to further their romantic interests. Second, there is relatively broad public contact with the online dating world because significant numbers of Americans personally know others who have tried and succeeded at online dating. Some 15% of those in this survey of the general public – representing about 30 million Americans – say they know someone who has been in a long-term relationship or married someone they met online. Twice as many know someone who has at least dabbled in the online dating scene.

At the same time, most internet users believe online dating is dangerous because it puts personal information online and they also think that many online daters lie about their marital status.

Most internet users (66%) agree with the statement that online dating is a dangerous activity because it puts personal information on the internet. Some 25% do not consider online dating dangerous. Female internet users, older users, and those who have lower levels of income or education are among the most wary of these risks.

Those who have actually used the services are more confident; 43% think that the activity involves risk, while 52% do not see the activity as dangerous. In a separate question, 6% of online daters say that dating websites do an “excellent” job of protecting people’s personal information, while 32% say they do a “good” job. Another 33% rate the services as “fair” and 12% say the websites do a “poor” job of protecting their information.

In addition, 57% of internet users agree that a lot of people who use online dating lie about their marital status; while 18% disagree, and 25% say they do not know. Those with lower levels of income or education are more likely than the average internet user to suspect that people lie.

Just over half (52%) of online daters agree that a lot people are dishonest about being married, while 32% disagree, and 15% say they do not  know. The internet users who are single and looking for dates report similar views.

While some stigma about online dating persists, most internet users do not view it simply as a last resort.

One in ten internet users say they have personally gone to dating websites.

Those who are in the market for online dating services are a relatively specific group. Looking at the total internet population, 11% of all American internet-using adults—about 16 million people—say they have gone to an online dating website or other site where they can meet people online. We call them online daters in this report.

Our survey also finds that, at the moment, 7% of online adults, or about 10 million people, say they are currently seeking romantic partners. Within this group, 37% have gone to a dating website.

Online Daters are defined here as internet users who have gone to an online dating website or other site where they can meet people online.

A majority of online daters report good experiences with the sites.

Still, the general online public is evenly divided over the merits of online dating. While 44% agree that internet dating is a “good way to meet people,” the same percentage disagrees with that statement. A sizable segment, 11%, says they do not know. Online men (48%) have a greater tendency to see the benefits of online dating when compared with online women (41%). And, in general, the younger the internet user, the more likely he or she is to rate the services favorably.

Online daters believe dating websites help people to find a better match because they can get to know a lot more people.

Most online daters think that using internet dating services helps to open up the playing field. Fully 64% agree that online dating helps people find a better match because they have access to a larger pool of potential dates, while just 31% disagree with this assessment. Another 6% say they do not know whether or not online dating facilitates better connections.

The general online public is less certain, but generally supportive of the notion that online dating facilitates better pairing. Looking at the total population of internet users, 47% agree that online dating allows people to find a better match because the pool of potential mates is larger online. Another 38% disagree, and 15% say they do not know.

There are uses of the internet beyond dating websites that have woven themselves into the world of romance.

Dating websites are just one of many online avenues that can lead to a romantic connection. Those who describe themselves as single and looking for a partner comprise a relatively small segment of the online population that totals about 10 million people. They use the internet both as a roadmap for the offline world and as a destination to meet people by marshaling things like search engines, email, and instant messaging to connect with a romantic partner.

Some 74% of those in this cohort report that they have used the internet in at least one way to facilitate dating and romance.

The table below lists the various dating-related activities included in our survey: 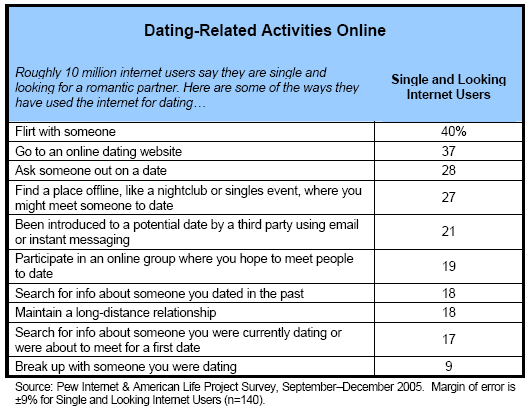 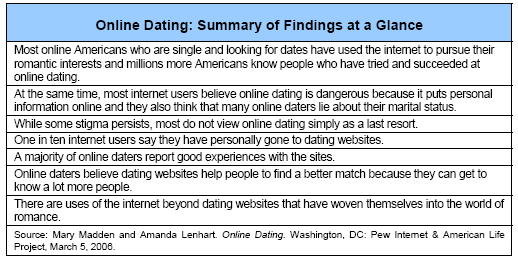 For Valentine’s Day, 5 facts on relationships and dating in the U.S.

Half of U.S. Christians say casual sex between consenting adults is sometimes or always acceptable