One in ten internet users have gone to a dating website.

About one in ten (11%) internet users who responded to our survey said they had ever gone to a dating website where they could meet people online.13 That represents about 16 million people. Looking exclusively at the current target population for these services, we find that 37% of internet users who say they are both single and currently looking to meet a romantic partner have gone to a dating website, which represents about 4 million people.

Online daters are generally younger and more likely to be employed. Looking across age groups, the youngest cohort (18-29 years old) has the largest percentage of online daters within it, with 18% of all online adults in that age group visiting a dating site. However, 11% of online adults ages 30-49 have ventured to dating sites, while 6% of those ages 50-64 and a mere 3% of those aged 65 and older have tried dating sites.

Online daters are more likely to be employed than non-daters, but they are not necessarily garnering huge salaries. Those earning lower incomes are slightly more likely to be online daters. Much of this discrepancy may be explained by the general youth of online daters, who have not necessarily entered their prime earning years. Possibly due to the relatively small sample size, there are no statistically significant differences in online dating use across race and ethnicity categories or education levels.

The following table gives the basic percentages of which online Americans use online dating sites. 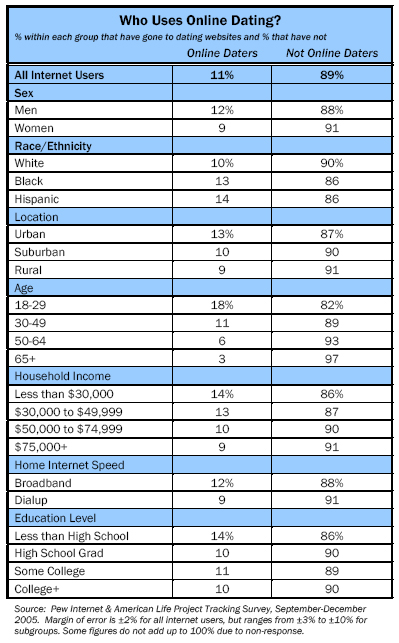 However, even among the singles who have ventured to online dating sites recently or in the past, some are currently unavailable. Of the single people who have used online dating sites (never married, separated, divorced, or widowed), nearly one-third (31%) are currently in a committed romantic relationship—65% are not. This ratio of involved vs. unattached singles is similar to what we find in the overall population of online singles.

Of the currently married people who have used online dating sites, the vast majority of them were married in the past 10 years, with nearly two-thirds (64%) married sometime in the past three years.

A majority of online daters report good experiences with the sites.

The survey shows that many online daters appear to be successful in meeting people online. A sizable segment of those who use online dating websites (43%) have actually followed through with a date, and 17% say their online romances have resulted in a long-term relationship or marriage.

Dating sites Yahoo and Match.com win the hearts of most users.

Though internet users often take advantage of other opportunities for dating, flirting, meeting, and investigating potential dates online, websites specifically geared toward online dating form the core of internet romance activities. Panel data gathered by comScore Media Metrix shows that Yahoo Personals and Match.com attracted the most visitors in January 2006. The table below lists the top ten websites that fall within the personals and dating category: 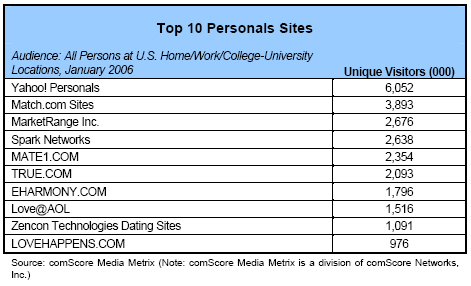 Online daters tend to identify with more liberal social attitudes, compared with all Americans or all internet users. 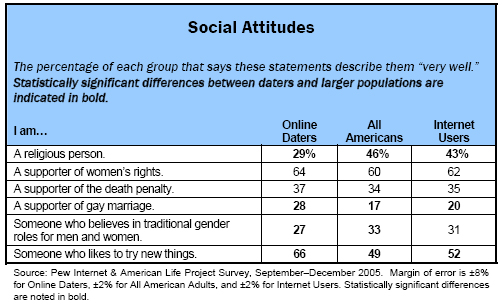 31% of all American adults say they know someone who has used a dating website.

While most Americans do not have firsthand experience with online dating, close to one in three adults know someone else who has tried the services. Internet users are in somewhat closer proximity to online dating; 38% of them know someone who has used online personals. Among those who are single and looking, 44% report knowing an online dater.

In general, younger people and those with higher levels of income and education are more likely to be tapped into the online dating scene via someone they know. Being a broadband user or someone who is single and looking in an area where it is difficult to meet people also increases the likelihood of being connected to someone with online dating experience:

26% of American adults say they know someone who has gone on a date with someone they met through a personals site.

Overall, about one in four Americans knows an online dater who has met another user for a date offline, and one in three internet users know someone who has followed through with a date. However, other subgroups report greater proximity to online daters:

15% of American adults and 43% of online daters know someone who has found a long-term partner online.

Online Dating Acknowledgments Part 1. Introduction Part 2. The State of Relationships in America
Part 3. Who Is Dating Online?
One in ten internet users have gone to a dating website.A majority of online daters report good experiences with the sites.Dating sites Yahoo and Match.com win the hearts of most users.Online daters tend to identify with more liberal social attitudes, compared with all Americans or all internet users.31% of all American adults say they know someone who has used a dating website.26% of American adults say they know someone who has gone on a date with someone they met through a personals site.15% of American adults and 43% of online daters know someone who has found a long-term partner online.
Part 4. Public Attitudes Toward Online Dating Part 5. Beyond Dating Websites Methodology