The Pew Internet Project’s fall 2005 Online Dating survey tried to get a sense of the general state of household partnerships in America. The table below shows the breakdown. These data mostly line up with findings of the U.S. Census Bureau from a 50,000-household survey in 2001.12 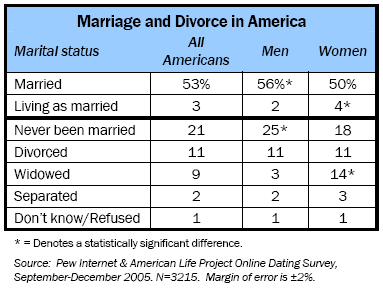 In general, marriage patterns have ebbed and flowed over time. Census data show fairly consistent patterns throughout the first half of the 20th century with a swing toward marriage in the 1950s and 1960s. Marriage rates then receded as the ranks of both the widowed and the never-married increased.

Looking at basic demographic variations, our survey showed that those with college degrees and higher levels of household income are significantly more likely to be married than those with high school diplomas and those living in households with more modest levels of income. African-Americans are more likely than whites and English-speaking Hispanics to have never been married.

Most internet users who are married or in committed relationships met each other offline.

Only 16% of single Americans, or 7% of all adults, say they are hunting for a partner.

While a sizable segment of the population is single, about a quarter of unmarried Americans (26%, or about 23 million adults) say they are in committed romantic relationships. Single men are more likely than single women to report being so situated. Yet among the uncommitted, relatively few say they are in the market for relationships. 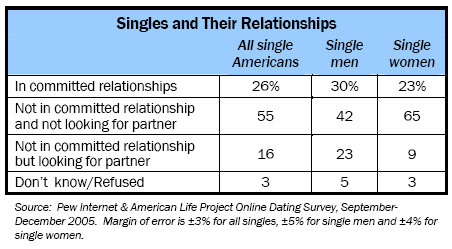 All of the relationship-seeking singles were asked to describe how many dates they had been on in the past three months and they reported this way:

This subpopulation of singles is too small in our survey sample to report highly reliable comparisons of men and women on this dating question. But it was generally the case that single men reported being less active than single women in going on dates.

A majority of relationship-seeking singles say it is difficult to meet people where they live.

Sometimes geography and lack of proximity to desirable partners can complicate the search for a romantic partner. When singles who are actively looking for partners were asked about the dating scene where they live, a majority (55%) said it was difficult to meet people. Only 43% said it was easy, while 2% said they didn’t know.

Next: Part 3. Who Is Dating Online?
← Prev Page
Page1Page2Page3You are reading page4Page5Page6Page7Page8
Next Page →

Online Dating Acknowledgments Part 1. Introduction
Part 2. The State of Relationships in America
A general portrait of marriage and divorce in America at the end of 2005Most internet users who are married or in committed relationships met each other offline.Only 16% of single Americans, or 7% of all adults, say they are hunting for a partner.A majority of relationship-seeking singles say it is difficult to meet people where they live.
Part 3. Who Is Dating Online? Part 4. Public Attitudes Toward Online Dating Part 5. Beyond Dating Websites Methodology