The average American internet user is not sure what podcasting is, what an RSS feed does, or what the term “phishing” means

Large numbers of internet users do not know the basic definition of some of the hottest new internet innovations and one of the most serious online dangers.

In a nationwide phone survey between May 4 and June 7, the Pew Internet & American Life Project asked internet users if they knew what certain internet terms meant. The results showed that some terms were well known, but that the terms “podcasting” and “RSS feeds” were not familiar to a majority of internet users and that “phishing” is still a foreign term to many: 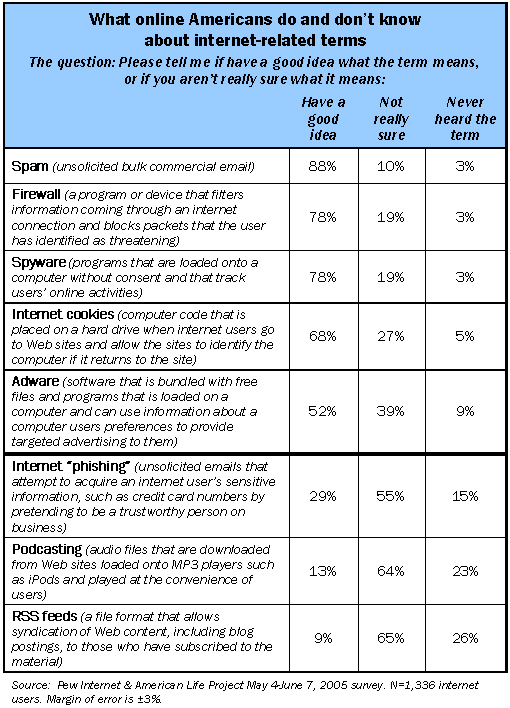 The findings are another reminder that new and exciting technology developments that seize the interest of industry officials and journalists such as podcasting and RSS feeds usually take a while to register in the wider public. In addition, it is also clear that public awareness of emerging online threats like those posed by phishing scams takes a while to emerge. A previous survey by the Pew Internet Project showed that 35% of email users had received phishing-type solicitations.1 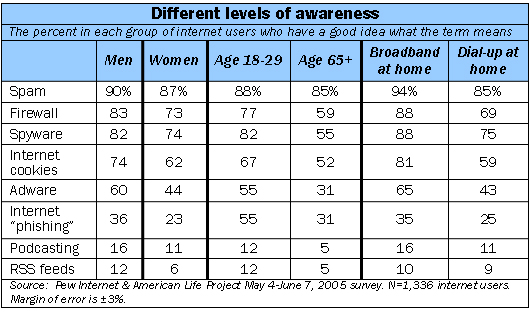 Q18    I’m going to read you some Internet terms you may or may not be familiar with. As I read each one, please tell me if you have a good idea what the term means, or if you aren’t really sure what it means.

The Spyware Survey, sponsored by the Pew Internet & American Life Project, obtained telephone interviews with a nationally representative sample of 2,001 adults living in continental United States telephone households. The survey was conducted by Princeton Survey Research International. Interviews were done in English by Princeton Data Source, LLC from May 4 to June 7, 2005.  Statistical results are weighted to correct known demographic discrepancies.  The margin of sampling error for the complete set of weighted data is ±2.3%.

Interviews were conducted from May 4 to June 7, 2005. As many as 10 attempts were made to contact every sampled telephone number. Sample was released for interviewing in replicates, which are representative subsamples of the larger sample. Using replicates to control the release of sample ensures that complete call procedures are followed for the entire sample.

Calls were staggered over times of day and days of the week to maximize the chance of making contact with potential respondents. Each household received at least one daytime call in an attempt to find someone at home. In each contacted household, interviewers asked to speak with the youngest adult male currently at home. If no male was available, interviewers asked to speak with either the youngest or oldest female at home based on a random rotation.2 This systematic respondent selection technique has been shown to produce samples that closely mirror the population in terms of age and gender.

Weighting is generally used in survey analysis to compensate for patterns of nonresponse that might bias results. The interviewed sample of all adults was weighted to match national parameters for sex, age, education, race, Hispanic origin and region (U.S. Census definitions). These parameters came from a special analysis of the Census Bureau’s 2004 Annual Social and Economic Supplement (ASEC) that included all households in the continental United States that had a telephone. 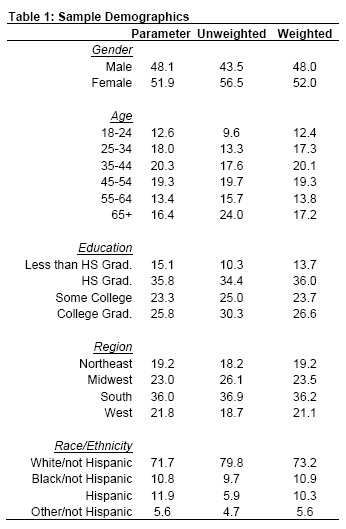 Post-data collection statistical adjustments require analysis procedures that reflect departures from simple random sampling. PSRAI calculates the effects of these design features so that an appropriate adjustment can be incorporated into tests of statistical significance when using these data. The so-called “design effect” or deff represents the loss in statistical efficiency that results from systematic non-response. The total sample design effect for this survey is 1.12.

The survey’s margin of error is the largest 95% confidence interval for any estimated proportion based on the total sample— the one around 50%. For example, the margin of error for the entire sample is ±2.3%. This means that in 95 out every 100 samples drawn using the same methodology, estimated proportions based on the entire sample will be no more than 2.3 percentage points away from their true values in the population. It is important to remember that sampling fluctuations are only one possible source of error in a survey estimate. Other sources, such as respondent selection bias, questionnaire wording and reporting inaccuracy, may contribute additional error of greater or lesser magnitude.

Table 2 reports the disposition of all sampled telephone numbers ever dialed from the original telephone number sample. The response rate estimates the fraction of all eligible respondents in the sample that were ultimately interviewed. At PSRAI it is calculated by taking the product of three component rates:3

Thus the response rate for this survey was 35 percent.

The average American internet user is not sure what podcasting is, what an RSS feed does, or what the term “phishing” means