Blog readership shoots up 58% in 2004. 6 million Americans get news and information fed to them through RSS aggregators, but 62% of online Americans do not know what a blog is.

By the end of 2004 blogs had established themselves as a key part of online culture. Two surveys by the Pew Internet & American Life Project in November established new contours for the blogosphere and its popularity:

The Pew Internet & American Life Project began asking about blog creation in the spring of 2002. In June of that year, 3% of internet users said they had created a blog or web diary that others could read. By the beginning of 2004, the figure had grown to 5% of internet users. Our survey in late November showed that the number grew to 7%, which represents more than 8 million people.

Blog creators are more likely to be:

Previous work of ours (please see “Content Creation Online” https://www.pewresearch.org/internet/Reports/2004/Content-Creation-Online.aspx) suggests that bloggers can be quite casual about their online postings, regularly updating material on their blog less frequently than once a week.

An even more dramatic story emerges in blog readership. We began asking about this in the spring of 2003 and found that about 11% of internet users at that time had read blogs. The figure jumped to 17% this past February and leapt to 27% in November. The growth in 2004 alone amounts to 58%.

Blog readers are somewhat more of a mainstream group than bloggers themselves. Like bloggers, blog readers are more likely to be young, male, well educated, internet veterans. Still, since our survey February, there has been greater-than-average growth in blog readership among women, minorities, those between the ages of 30 and 49, and those with home dialup connections. 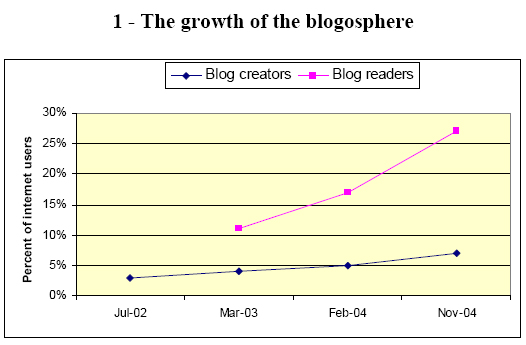 More than one-in-ten internet users (12%) say they have posted material or comments on others’ blogs. That represents more than 14 million people and is a threefold increase from April 2003 when we first asked a question about those who contribute to others’ blogs. Many of those posters themselves have blogs and a quarter of young adult internet users (those 18-29) have posted to other blogs.

Those who were heavily involved with the campaign online by getting news and information, using email to exchange arguments and mobilize others, and connecting to campaign events, were more likely than others to read political blogs. It was also relatively popular with younger internet users and with broadband users.

Kerry voters were a bit more likely than Bush voters to be political blog readers.

The rise of blogs has also spawned a new distribution mechanism for news and information from web sites that are regularly update their content. An RSS aggregator gathers material from Web sites and blogs you tell it to scan and it brings new information from those sites to you. RSS aggregators are usually downloaded and installed on users’ computers and then are programmed to “subscribe” to the RSS feeds from blogs, news Web sites, and other content-rich sites. When you go to your RSS aggregator’s page, it will display the most recent updates for each channel to which you subscribe. Many programs run inside Web browsers while others are standalone programs. Most are free.

Our first query on the use of RSS aggregators and XML readers shows that 5% of online Americans have RSS aggregators or XML readers that feed them content. They are classic early adopters: veteran internet users, well-educated, and relatively heavy online news consumers.

Here are some sites that explain the basics of RSS and give tips about how to set up RSS feeds and give some perspective on blogs:

Blogs still are not that well known

Blog readership shoots up 58% in 2004. 6 million Americans get news and information fed to them through RSS aggregators, but 62% of online Americans do not know what a blog is.Further analysisAbout the Pew Internet & Amerian Life Project