Men pursue and consume the news online more than women do.

The popularity of getting news from the Internet has grown over the years, with additional boosts following major news events like September 11 or the start of the Iraq war. Since 2000, when the Pew Internet & American Life Project began tracking participation in Internet activities, men have consistently shown that they are more likely than online women to have used the Internet to get news. In the latest figures, 77% of men have gone online to get news compared to 66% of women. 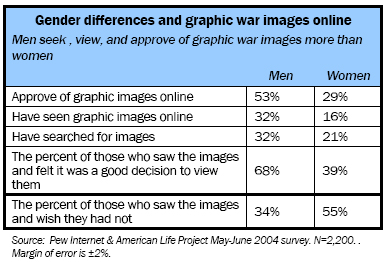 These gender-related differences are also evident when the issue focuses on the images that are available online.  Men and women behave differently in how they gather news, consume news, and in their attitudes about news presentation.

Men are also more active in using the Internet to seek out news that is not covered in the traditional media. Fully 33% of wired men have actively searched the Internet for general news not covered in the mainstream press, compared to 16% of women.  Further, of men who have seen the more graphic online images, 32% of men went looking for the online images that were deemed too graphic or disturbing for television and newspapers, compared to 21% of women.

Part of the explanation for this gender difference is that women are more unhappy about finding those graphic and disturbing images.  While 68% of men felt it was a good decision to go looking for extreme images, only 39% of women felt that way. And 34% of men wished they hadn’t seen them, compared to 55% of women.

In previous findings about early Iraq war coverage, young adult Internet users, those 18 – 29 years old, show a greater appreciation than older users of how the Internet can keep them abreast of the news.2 In this survey, younger users continue to demonstrate their enthusiasm for going online for news of all and any sort. Some 29% of the youngest Internet users have looked for general news or photos or videos not covered offline, compared to 23% of users over 30 years old. 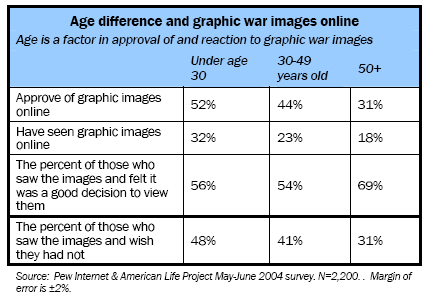 And a significantly larger number of the youngest Internet users, 32%, have seen images online that were deemed to graphic or disturbing by traditional media outlets, compared to an overall 21% of older users.

Younger users are more accepting than older Americans of graphic news coverage of the ugliest parts of this war, both by the mainstream media and online. Significantly greater numbers of young Americans, 56%, think the traditional media is within acceptable bounds with the images they have been showing, compared to 48% of those between 30 – 49 years old and 40% of those over 50 years.  And significantly larger number of young Internet users, 52%, approve of the more extreme images being available on the Internet, compared to 44% of those 30 – 49 years and 31% of those over 50 years.

However, the tolerance doesn’t translate into comfort when it comes to reality.  Of those who actually saw the most graphic online images, 69% of those who were 50 – 64 years old thought they had made a good decision to look at the graphic images, significantly more than the 54% of those 30 – 49 years old, and 56% of the youngest Internet users.  Similarly, more young users, 48% wished they hadn’t seen the images, compared to 41% of those 30 – 49 year olds, and 31% of those 50 – 64 years old. 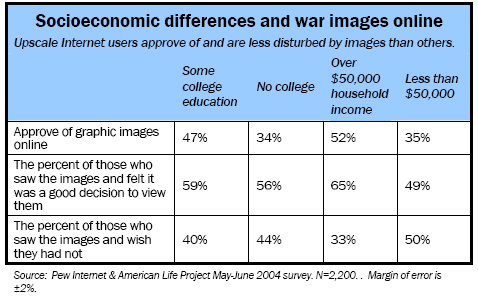 In the mainstream media, where consumers are presumably more familiar and comfortable with the traditional boundaries of what constitutes acceptable imagery, 47% of Americans think the print and television press are right in showing the kinds of war images they do, compared to 41% who don’t think so.  But the tables turn when it comes to online material; more people express their discomfort with the graphic and disturbing war related images that have been appearing uncensored online. Only 40% of Americans approve of the kinds of images available on the Internet — ones that traditional media have decided NOT to show — compared to 49% who disapprove.

Yet, even among the most  aggressive group, the 28% of Internet users who have actively sought and seen graphic and disturbing  images online, there remains more than a quarter of those who have reservations about what they have seen.  About three-quarters of those who actively sought and found the graphic online images, 72% said they made a good decision in looking at the images; while 24% wish they hadn’t seen them, and 4% said both.

Both Democrat and Independent Internet users are more tolerant of disturbing news images being online than Republican Internet users.

Next: Methodology and questionnaire responses
← Prev Page
Page1Page2Page3You are reading page4Page5
Next Page →