Americans are turning to the Internet for news coverage they can’t find in the mainstream news media.

During recent months, a significant number of Americans have been turning to the Internet as a source of news and pictures that are not available in the mainstream media. This has come at a time of intense and dramatic news coverage that includes an unprecedented volume of references to disturbing images from the war in Iraq.

Further, with respect to specific coverage of the war in Iraq, 24% of Internet users have seen war images on the Internet that were deemed too graphic or disturbing to be shown on television or in newspapers. Of those who have seen such images, 28% said they actively sought out these images. The rest say they happened upon the images while they were doing something else online.

There are cultural schisms over whether the most graphic images should be available online.

Among segments of the population, a major values gap emerges. Men approve the idea of graphic and disturbing war-related pictures being made available online by a margin of 53%-36%. Women, on the other hand, disapprove of their availability online by a 61%-29% gap. 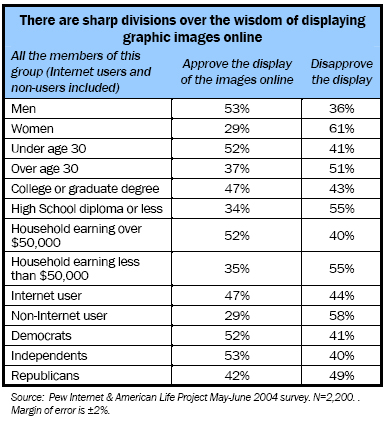 The experience of viewing the disturbing images online is both positive and painful.

Almost one quarter of Internet users have actually seen the graphic and disturbing war images that appear only online.  They come away from the experience of mixed mind: 51% of those Internet users felt they had made a good decision in looking at the images, 33% wish they hadn’t seen them, and 7% volunteered that both of these impressions were true for them.

One cohort, women, stood out from the rest as more than half responded negatively to both questions we posed. Of the 16% of women who have seen the war images online, only 36% say they felt they made a good decision in doing so; 52% said they wish they hadn’t seen them, and 3% said both.

Next: Part 3. Demographic and other group differences
← Prev Page
Page1Page2You are reading page3Page4Page5
Next Page →

Internet as Unique News Source Part 1. Introduction
Part 2. The new experience of war images online
Americans are turning to the Internet for news coverage they can’t find in the mainstream news media.There are cultural schisms over whether the most graphic images should be available online.The experience of viewing the disturbing images online is both positive and painful.
Part 3. Demographic and other group differences Methodology and questionnaire responses