27% of online Americans have heard of VOIP telephone service; 4 million are considering getting it at home

While telephone calling using Voice over Internet Protocol (VoIP) has attracted considerable attention in the business community and among policymakers, 27% of Internet users in the United States – or 17% of all Americans – have heard of the service. Of those who have heard of VoIP, 13% have considered purchasing the service for home use. In other words, at this very early stage of VoIP’s life, 3% of Internet users have considered adopting VoIP technology in the home.

This means that approximately 34 million American Internet users have heard of VoIP and 4 million have given thought to using Voice over Internet Protocol service for home telephone service. The survey also found that 11% of Internet users, or about 14 million Americans, have at one time made a phone call over the Internet. This figure includes people who may have used VoIP at work or perhaps have downloaded free software that permits phone calls between Internet-connected computers.

The findings come from the Pew Internet & American Life Project’s February 2004 survey of 2,204 Americans, 63% of whom were Internet users. The survey asked whether any online Americans use VoIP service for home telephone service. Of the 2,204 respondents, just one said that VoIP is used in the home, showing the low rate of consumer adoption of the technology so far. The questions on VoIP in the February 2004 survey were developed in collaboration with the New Millennium Research Council. The council can be found at http://www.newmillenniumresearch.org/. 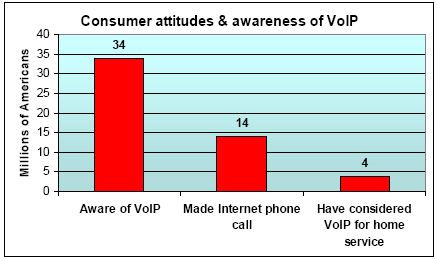 People between the ages of 25 and 34 seem most aware of VoIP; 32% of those in this age range have heard of VoIP. Perhaps surprisingly, only 15% of those between the ages of 18 and 24 have heard of VoIP, and this age group is slightly less like than average to have made a phone call online. A possible explanation has to do with the mobility of young people – they may value a cell phone more than an innovation in home telephone service.

Among the Americans who use VoIP, these people seem willing to put up with a few hassles in service and quality as they generally sing the praises of VoIP. Comments on the DSL Reports Web site (www.dslreports.com) show that many users have favorable impressions of VoIP, even as they point out problems that might not be tolerated of “plain old” telephone service. Common complaints involve static or delays in voice transmission, and occasional problems with calls when other users in the house are downloading files on the Internet.

Yet, because the home VoIP pioneers are likely to be technology enthusiasts, these problems do not dim the glow of being on the cutting edge. A sampling of comments that users of VoiceGlo’s VoIP service made in response to queries posted at VoiceGlo’s Web site shows most users have a favorable impression of their VoIP service. Many users cite that VoIP’s attractive price as one of its benefits. At the same time, users expressed the desire for a wider range of services, such as caller identification, video capability, three-way calling, and directory service. Again, this suggests a high tolerance among those trying the new service for service shortcomings; some of the desired services are available from plain old telephone service.

Voice over Internet Protocol offers the capability to transmit voice communications over the Internet, employing a variety of end user devices. In most cases, VoIP services convert the analog voice from a telephone (using an adapter between the telephone and the Internet connection) into digital signals that travel as packets over the Internet then are converted back to analog voice at the receiving end. When placing a VoIP call using a phone with an adapter, a consumer hears a regular dial tone and can dial traditional phone numbers. Other VoIP services allow calls directly from a computer, either to a network of common service subscribers or to any telephone number. True VoIP requires the customer to have a broadband connection, such as cable modem or DSL.

According to Gartner, Inc., a technology research firm, at the end of 2003 there were 150,000 U.S. VoIP subscribers. Gartner predicts this number would grow to 1 million by the end of 2004 and reach 6 million by the end of 2005.1 Some experts predict that consumer use of VOIP could reach 40% of the U.S. market by 2009.2 The Federal Communications Commission (FCC) has already issued two policy decisions on VoIP3 and has initiated a wide ranging proceeding to determine the appropriate regulatory framework for IP-enabled services.

Industry offerings and consumer choices are proliferating as the telecommunications industry moves to introduce this new technology. AT&T unveiled CallVantage in March 2004.4 The local phone companies, such as Verizon5 and BellSouth6, announced their intention to enter the residential VoIP market within the next year. Cable companies, such as Cablevision which launched its VOIP service in September 20037, are rapidly expanding trial VoIP offerings. Vonage, VoiceGlo, Voicepulse, Net2phone, iConnectHere, Free World Dial-Up, and Packet 8 are the leading VoIP-specific companies in the market.

Most VoIP services offer customers a range of features including voicemail, CallerID, call forwarding, 3-way calling, and call blocking. Customers have the option of choosing a phone number from nearly any area code in the country.  VoIP services and products are available either directly from the provider or in some cases, at retail stores. Vonage markets its products at Circuit City electronics stores and offers customers who purchase at the store a discount on service.

Currently, VoIP services are not subject to many state or federal taxes and fees, and thus can offer calling plans at rates competitive with those of wireline and wireless telephony providers. However, it is difficult to compare prices due to differences in quality of service and features. No technical analysis is yet available that accurately contrasts the cost differences between VoIP and traditional wireline services.

VoIP services do have several potential drawbacks, as noted above.  Service quality is still questionable; calls are audible, but there can be latency in the transmission and if the broadband connection is being used for another purpose while simultaneously making a VoIP call, the sound can be uneven.8 Additionally, some VoIP providers do not offer 911 emergency service capability. While providers are said to be working with emergency service officials to address this problem, the ability to contact police, fire and other emergency services via the telephone is critical.9

VoIP Awareness in America
A VoIP Primer27% of online Americans have heard of VOIP telephone service; 4 million are considering getting it at home
Methodology