I’m going to read you [a] short list of activities.  Please tell me if you ever do any of the following when you go online.  Do you ever…/Did you happen to do this yesterday, or not?10 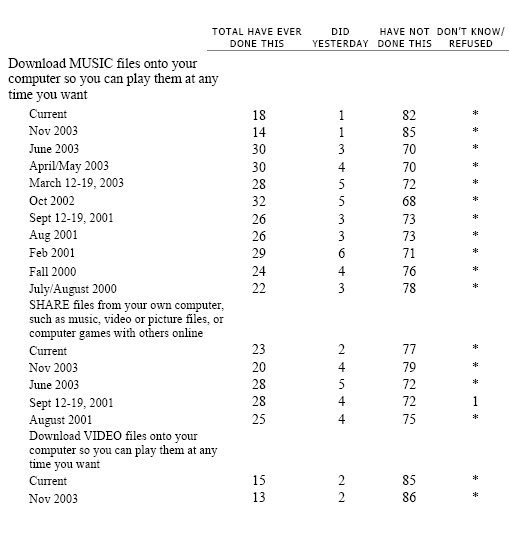 DL1         You said you don’t currently download music files.  Have you EVER downloaded music files in the past?

DL3         As you may know, the Recording Industry Association of America, RIAA, has begun taking legal action against individuals who share large numbers of music files on the Internet without permission from the copyright holder.  Are these lawsuits the reason you no longer download music files, or did you stop because of some other reason?

Based on those who downloaded music in the past [N=167]

DL4         As you may know, the Recording Industry Association of America, RIAA, has begun taking legal action against individuals who share large numbers of music files on the Internet without permission from the copyright holder.  Would these lawsuits keep YOU, personally, from downloading music files in the future?

Based on those who never downloaded music files [N=991]

DL5     Do you CURRENTLY download music files from any of the following places…  (INSERT)?

Based on those who currently download music files [N=213]

DL6         Do you care whether or not the music you download onto your computer is copyrighted, or isn’t that something you care much about?

Based on those who currently download music files [N=213]

DL7         The Recording Industry Association of America, RIAA, has begun taking legal action against individuals who share large numbers of files on the Internet without permission from the copyright holder.  Have you PERSONALLY been downloading or sharing files LESS OFTEN in recent months because of these lawsuits?

Based on Internet users who currently download music files [N=213]

This report is based on the findings of a daily tracking survey on Americans’ use of the Internet. The results in this report are based on data from telephone interviews conducted by Princeton Survey Research Associates between February 3 to March 1, 2004, among a sample of 2,204 adults, 18 and older.  For results based on the total sample, one can say with 95% confidence that the error attributable to sampling and other random effects is plus or minus 2 percentage points.  For results based Internet users (n=1,371), the margin of sampling error is plus or minus 3 percentage points.  In addition to sampling error, question wording and practical difficulties in conducting telephone surveys may introduce some error or bias into the findings of opinion polls.

New sample was released daily and was kept in the field for at least five days. This ensures that complete call procedures were followed for the entire sample. Additionally, the sample was released in replicates to make sure that the telephone numbers called are distributed appropriately across regions of the country. At least 10 attempts were made to complete an interview at every household in the sample. The calls were staggered over times of day and days of the week to maximize the chances of making contact with a potential respondent. Interview refusals were recontacted at least once in order to try again to complete an interview.  All interviews completed on any given day were considered to be the final sample for that day. The completion rate on the survey was 32.2 percent.

Non-response in telephone interviews produces some known biases in survey-derived estimates because participation tends to vary for different subgroups of the population, and these subgroups are likely to vary also on questions of substantive interest. In order to compensate for these known biases, the sample data are weighted in analysis. The demographic weighting parameters are derived from a special analysis of the most recently available Census Bureau’s 2003 Annual Social and Economic Supplement (March 2003). This analysis produces population parameters for the demographic characteristics of adults age 18 or older, living in households that contain a telephone. These parameters are then compared with the sample characteristics to construct sample weights. The weights are derived using an iterative technique that simultaneously balances the distribution of all weighting parameters.

comScore Media Metrix, a division of comScore Networks, Inc., provides industry audience measurement services that report details of online media and application usage, visitor demographics and buying power for home, work and university audiences.  This capability is based on continuous and passive measurement of a representative cross-section of more than 1.5 million global Internet users, who have given comScore explicit permission to monitor their Web browsing, buying and other transaction behavior.  All comScore Media Metrix syndicated ratings are based on industry-sanctioned sampling methodologies.