The recording industry campaign against those who download and swap music online has made an impact on several major fronts, but the number of Americans downloading music and sharing files online has increased, according to the most recent survey of the Pew Internet & American Life Project.1

The Project’s national phone survey of 1,371 adult Internet users conducted between February 3 and March 1, 2004 shows that 14% of online Americans say that at one time in their online lives they downloaded music files, but now they no longer do any downloading. That represents more than 17 million people. However, the number of people who say they download music files increased from an estimated 18 million to 23 million since the Project’s November-December 2003 survey.

The Pew Internet Project poll shows that a third of the former music downloaders, close to 6 million Internet users, say they have turned away from downloading because of the suits brought against music file-sharers by the Recording Industry Association of America. The retreat is particularly pronounced among online men, Internet users between the ages of 18-29, and those who have broadband connections at home.

Furthermore, among Internet users who have never tried music downloading, 60% say the RIAA lawsuits would keep them from downloading music files in the future. Women with Internet access are more likely than online men to say they are deterred by the law suits.

New data from comScore Media Metrix, based on the company’s continuously and passively measured consumer panel, show – with variations by application and month analyzed – continuing declines or stagnancy in the number of people with popular peer-to-peer file sharing applications actively running on their computers. Since our last data memo on downloading, in which we reported comScore data gathered between November 2002 and November 2003, the KaZaa user base dropped most notably. Between November 2003 and February 2004 alone, comScore estimates that over 5 million fewer people are actively running KaZaa. 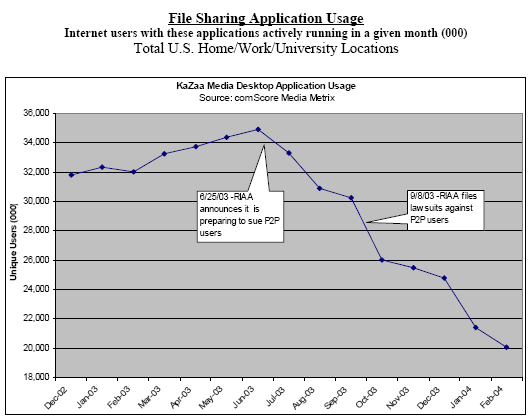 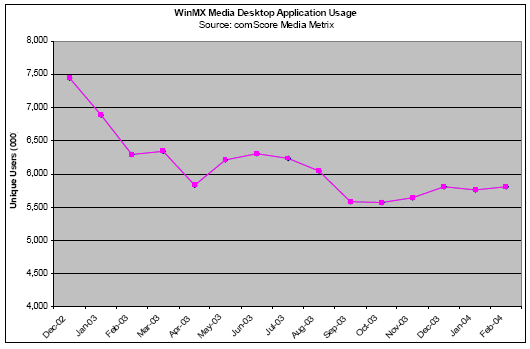 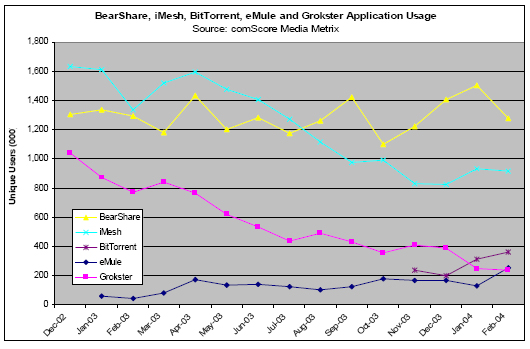 The number of those who say they download music online remains well below the peak levels that we tracked in the spring of 2003, but there was some growth in those who reported music downloading in our February survey. The comScore data also shows growth since last November in usage of some of the smaller file-sharing applications, such as iMesh, BitTorrent, and eMule.

About a third of current music downloaders say they use peer-to-peer networks. Another 24% of them say they swap files using email and instant messaging; 20% download files from music-related Web sites like those run by music magazines or musician homepages.

And while online music services like iTunes are far from trumping the popularity of file-sharing networks, 17% of current music downloaders say they are using these paid services. Overall, 7% of Internet users say they have bought music at these new services at one time or another, including 3% who currently use paid services. 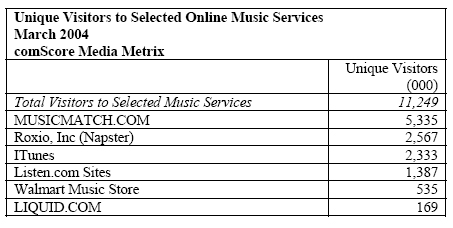 It is still the case that a majority of music downloaders are indifferent to copyright – 58% of them said they did not care about the copyright on the files that they download in the February survey. Still, there has been striking growth in the number of downloaders who say they do care about the copyright on those files. In the March-May 2003 survey, we asked music downloaders if they cared whether or not the music they downloaded was copyrighted and 27% said yes. The figure from the February 2004 survey was 37%. Some of the most notable increases in concern about copyright have occurred among online men, those in the Baby Boom generation, and among those with college degrees and relatively high levels of household income.

Inside the downloader population, men are 50% more likely to have downloaded songs compared to women. And 38% of those ages 18-29 say they download songs. This is a figure considerably lower than the rates we were tracking in the first half of 2003, when more than 50% of this population downloaded songs.

Some 15% of Internet users report they have downloaded video files onto their computer, up from 13% who said they had done so in our November-December survey. Online men are twice as likely as women to have done this. And young adults (those ages 18 to 29) are twice as likely as older Internet users to have done this. However, as bandwidth constraints become less of an issue for users, it is likely that video downloading will become significantly more widespread.

Those who say they share files from their own computer, such as music, video or picture files, or computer games rose slightly to 23% in the February 2004 survey. In our November-December 2003 survey, 20% of all Internet users said they shared files with others online. Still, that reflects a significant drop from the 28% who reported this last June. Equal portions of online men and women say they share files, but young adults are much more likely to share when compared to older users.

Since January when we issued our last report on downloading, the recording industry has continued its campaign against unauthorized file-sharing online. In March, the RIAA announced an additional 532 lawsuits against Internet users accused of illegal file-sharing, bringing the total number sued to 1,977.2 According to the RIAA, music CD sales dropped from a high of $13.2 billion in 2000 to $11.2 billion in 2003.3 And this April, the International Federation of Phonographic Industries reported a 7% decline in global music sales in 2003. Over the past three years, the IFPI reports a 20% total sales drop and it attributes the majority of this decline to Internet piracy.4

However, many have questioned arguments about file-sharing’s negative impact on sales. Some argue that multiple factors might have contributed to the current slump, such as fewer releases, higher prices, and a struggling economy. Moreover, a newly released two-year economic study published by Felix Oberholzer-Gee of the Harvard Business School and Koleman S. Strumpf of the University of North Carolina at Chapel Hill argues that peer-to-peer file-sharing has had no measurable effect on music sales.5 Some recent news articles have reported that some music labels regularly pay for and use detailed tracking information gleaned from peer-to-peer networks for targeted marketing aimed at boosting sales.6

On March 31st, a House Judiciary subcommittee unanimously approved the Piracy Deterrence and Education Act of 2004 (PDEA). If the PDEA is passed into law, those who circulate copyrighted files online could face up to three years of jail time. The bill is specifically targeted towards Internet users who share 1,000 or more songs during a 180-day period and includes provisions for the FBI, the Copyright Office, and the Justice Department to establish piracy deterrence and education programs.

In January 2004, the Pew Internet & American Life Project and comScore Media Metrix released a joint data memo on downloading and file-sharing titled, “Sharp Decline in Music File Swappers.” The findings presented in the memo reported a dramatic drop in self-reported downloading and file-sharing in the months following the announcement of the RIAA lawsuits, and as such, they were widely discussed. As part of the ongoing public debate over downloading and copyright issues online, the Pew Internet survey data and the comScore panel data were compared to other pieces of research on the subject.

And despite considerable variations in existing research methodologies for studying downloading and file-sharing activity, other publicly released data by other research firms, including The NPD Group and Neilsen//NetRatings registered relatively congruent declines in Americans’ overall downloading and usage of peer-to-peer services during the same period.

The January 2004 Pew Internet/comScore Media Metrix data memo reported findings from two sources. First, a nationally representative RDD telephone survey of 1,358 American adult Internet users conducted by the Pew Internet Project in November and December of 2003 showed a 50% drop in the percentage of individual Internet users who reported music downloading when compared to the Project’s March-May 2003 survey. Independently gathered data from comScore’s passively measured consumer panel also observed a substantial and continuous decline in individual usage of popular peer-to-peer file-sharing applications from June 2003 onward.  In total, comScore measures the behavior and attitudes of more than 1.5 million global Internet users, of which a representative U.S. sample of approximately 100,000 was used to produce the comScore Media Metrix data cited in our report.

Research from The NPD Group tracked a similar decline in music downloading among Americans during the period between May and September 2003. Data gathered through NPD’s bi-monthly MusicLab survey, conducted among approximately 5,000 respondents aged 13 and older, showed a decrease of 20% in the population who said they downloaded music from peer-to-peer services in May to 11% who reported this in September. By November, NPD reported that the incidence of peer-to-peer downloading had ticked up to 12%, still well below peak levels. Separate data gathered from NPD’s MusicWatch service, which follows household usage of peer-to-peer applications by monitoring the PCs of volunteer consumer panelists, recorded a six-month decline between April and September 2003. However, the number of households downloading music files then reportedly grew 14% between September and November.7

Nielsen//NetRatings research reported in late September that usage of popular file-sharing applications was at an all-time low. Nielsen//NetRatings first observed a decline in July, when unique visitors to KaZaA, Morpheus and iMesh all dropped by roughly 15% immediately following the announcement of the RIAA lawsuits.8 Unique visitors of these applications continued to decline throughout the summer and by September (after most schools were back in session), there had been a total 41% plunge in traffic to the KaZaA application alone (recorded between the week ending June 29 and the week ending September 21).9

The Pew Internet & American Life Project is a non-profit initiative, fully-funded by The Pew Charitable Trusts to explore the impact of the Internet on children, families, communities, health care, schools, the work place, and civic/political life. The Project is non-partisan and does not advocate for any policy outcomes. For more information, please visit our Web site: https://www.pewresearch.org/internet/.