The changing picture of who’s online

A broad analysis of over three years’ worth of Pew Internet Project data illustrates shifting trends in Internet use by Americans.

Among our findings about change in the Internet world over time:1

Close to two-thirds of Americans now go online to access the Internet.

The number of American adults going online grew by 47% between our March 2000 and August 2003 surveys. However, growth in Internet penetration was relatively flat over the course of 2002.

Internet use still differs significantly across some demographic groups.

Email continues to trump all as the most popular use of the Internet.

Internet users overwhelmingly rely on email as their communication tool of choice; more than nine in ten online Americans have sent or read email. In comparison, about one-half of all Internet users have tried instant messaging and one-quarter has participated in chat rooms or online discussions.

Information-seeking activities have grown across the board since 2000 — most by 50% or more.

Overall, information-seeking activities are more prevalent among users with higher income and education levels, those with more experience online, and those with broadband access at home.

As the online marketplace has matured; financial and transaction-based activities have grown more than any other type of online pursuit.

Similar to the pattern we have found with information-seeking activities, financial and transaction-based activities are most popular among users with greater income and education levels, those with more experience online, and those with broadband access at home.

Online Americans continue to explore new hobby and entertainment activities on the Internet.

In general, these online pursuits are more popular among the younger segments of the Internet population and those who have high-speed connections at home. Another common trend is that a higher proportion of online African-Americans and online English-speaking Hispanics do these activities compared to online whites, possibly because those online minority populations are younger than the white population. 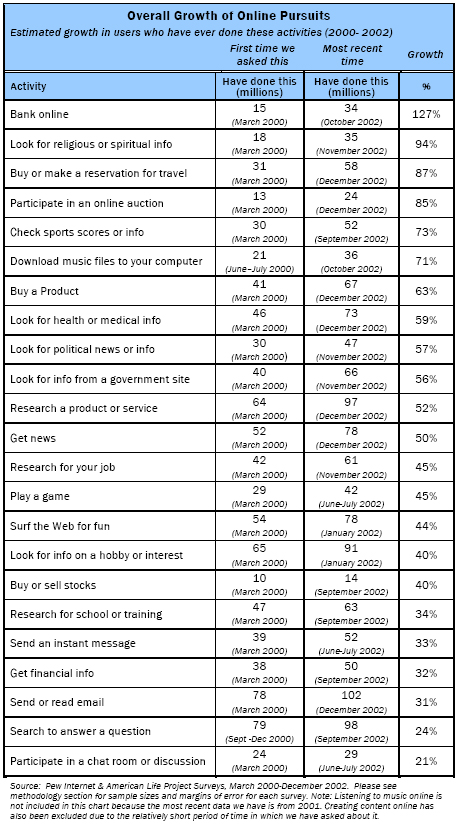 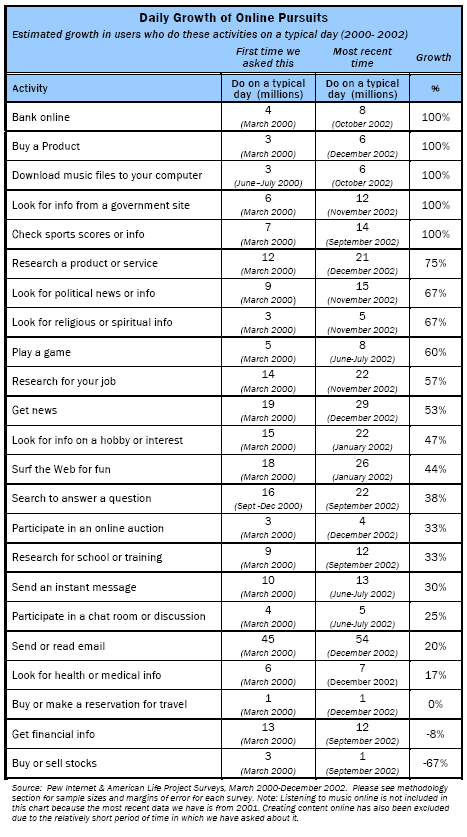 Next: Acknowledgements
← Prev Page
You are reading page1Page2Page3Page4Page5Page6Page7Page8Page9Page10
Next Page →