In the midst of dropping share prices, layoffs, and closings among Internet companies, most Americans attribute dot-com difficulties to overeager investors looking for quick payoffs and to the poor business plans of dot-com entrepreneurs. According to a Pew Internet & American Life Project poll conducted in February, 67% of the Americans who have heard about dot-coms’ financial troubles subscribe to an “irrational exuberance” view of the cause of dot-coms’ troubles, namely that Internet companies are struggling because investors’ desire to turn quick profits led to too many business risks. A solid majority (56%) of those who have heard about Internet firms’ problems say that Internet companies lacked clear plans for attaining profitability and that this is a major reason behind their recent financial problems. Some 39% blame the youth and inexperience of some of the Internet firms’ executives. 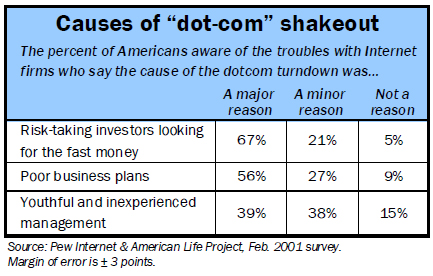 With dot-com layoffs totaling nearly 35,000 workers since December and 66,000 in the past 15 months, most Americans (67%) are aware of the reversal of fortune among Internet companies. About 57 million Americans, or 30% of all American adults, have followed these developments very closely, with 43% of Internet users deeply engaged with stories of dot-com woes.

Although many people are following dot-com developments, Americans seem cool-headed about the shakeout’s overall impact on the economy and the Internet itself. Only one-quarter (26%) of Americans who have heard about online business troubles think that the dot-com slowdown will have a major impact on the economy.

As for Internet content, about three-fifths (57%) of the Americans who have heard about dot-com troubles agree with the proposition that closing down some Web sites is a good thing because the Internet had too many sites with too little to offer. This is twice the number (28%) who believe that the loss of these Web sites is bad because it would lessen the amount of choice available on the Web.

The Internet Elite are Most Likely to be “Dot-Glums”

Not surprisingly, the Internet elite—the 20% of the most highly wired Internet users who have been on the ’Net the longest and who log on daily—have felt the dot-com tumble the most. A sizable minority of this elite, call them the “dot-glums,” have lost money on a dot-com investment, know someone who has been laid off from an Internet company, or have seen a Website they like shut down. In fact, the dot-glums make up 38% of the Internet’s elite users, or about 8 million Americans. Nearly one-quarter (24%) of dot-glums know someone who has lost a job at an Internet company, 14% either lost money on an Internet investment or have a family member who did, and 15% are missing a Web site that no longer exists.

Who are the dot-glums? They are mostly male (69%), well-off (26% have household incomes over $100,000 compared with 7% of the overall population), and well educated (51% have college degrees). And if this group is commiserating over the Internet with fellow travelers who have suffered from the dot-com downturn, they are doing so at high speed. Fully one-third (33%) of the dot-glums have broadband Internet connections at home compared with 12% of all Internet users.

The popular perception is that the young are leading the Internet revolution, so it is no shock that young people see the sagging fortunes of Internet companies differently from their elders. In general, Americans do not see the inexperience of Internet entrepreneurs as a principal reason for the current downturn. When asked whether the youth and inexperience of the management of Internet companies is a major reason for their financial problems, 39% of all Americans agree with that, but an equal number (38%) say it is a minor reason. However, older Americans are much more likely than young Americans to blame young entrepreneurs for dot-com troubles. Fully 44% of those over age 50 say the youth of these companies’ leaders is a major problem, compared to 34% of those between ages 18-29 who say so.

A similar generational division exists when people are asked whether Internet investors took too many risks in their eagerness to make money. Most Americans (67%) agree that this is a major reason behind dot-coms financial woes. But Americans between age 18 and 29 are less likely to blame greed than their elders are. Fully 78% of those between 50 and 64 say investors’ risky behavior is a major cause of the downturn, while 58% of Americans between 18 and 29 feel this way.

Some 21% of Americans think investors’ risky behavior is only a minor factor in dot-coms’ fading fortunes. Young Americans are much more likely to say this than older Americans. One-third (34%) of those in the 18-29 age group say investors’ risky behavior has been a minor problem for dot-coms, while only 11% those between ages 50 and 64 are willing to downplay that issue and call it a minor factor.

Education, Income, Internet Use Drive Perceptions about Economic Impact—Except for the Dot-Glums

Men and women have somewhat different views on the causes, impacts, and likely consequences of the financial difficulties of the Internet industry. The starkest contrast is in attention paid to dot-com financial news. By a 38% to 23% margin, men are far more likely than women to be following the travails of dot-coms very closely; among Internet users, the numbers are 51% for men and 34% for women.