16 million newcomers gain Internet access in the last half of 2000 as women, minorities, and families with modest incomes continue to surge online

The changing online population: It’s more and more like the general population

During the second half of 2000, when much attention was focused on the struggles of dot-com firms, the overall Internet population continued to grow at a healthy clip as women, minorities, those earning between $30,000 and $50,000 flocked online, and parents with children at home flocked online. In fact, there were substantial gains across the demographic board as millions of newcomers joined the online world and millions of others expanded the activities they perform online.

The increase in online access by all kinds of Americans highlight the fact that the Internet population looks more and more like the overall population of the United States. However, there are still some notable demographic differences when it comes to access. The most dramatic disparities are defined by income and age. The income gap looks this way: 82% of those living in households with more than $75,000 in income now have Internet access, compared to 38% of those in households earning less than $30,000. The good news is that those at the low end of the economic scale are coming online relatively rapidly. Only 28% of those in lower-income households were online in May-June.

Meanwhile, the Internet is becoming ever more attractive to women and minorities. Women have pulled slightly ahead of men in the overall Internet population; 50.6% of American adults with Internet access are women and 49.4% are men. In addition, online women are almost as likely now to be using the Internet on a typical day as men are. A disparity still exists between men and women online as percentages of their own populations because there are more women in America than men. Thus, as the table on the previous page shows, 58% of American men have Internet access now and 54% of women have access.

The African-American population online grew eight percentage points and that yielded a growth rate of more than 22% during the final half of 2000. A substantial share of the increase came from African-American women. Some 45% of black women had Internet access at year’s end, compared to just 34% at mid-year. The increase in Internet access among black men was notable, but less substantial. During the same period, the Hispanic population grew seven percentage points and that means the growth rate was more than 17% in late 2000. This growth was fairly evenly divided among men and women.

In some population segments, Internet penetration is getting quite high: 75% of those age 18-29 now have access; 82% of those with college or graduate degrees have access; 82% of those living in households with incomes over $75,000 have access; and almost two-thirds of parents with children living at home have access. However, it is also noteworthy that the growth rates among those with high incomes and college educations were modest. This suggests that saturation penetration of the Internet even among those at the highest socio-economic levels could still be several years away. (By comparison, 94% of U.S. households have telephones and 98% have televisions and the penetration of both technologies in the highest socio-economic brackets approaches 100%.)

Some recent studies have shown a drop in Internet use in the final part of 2000 and that has prompted some to wonder if people were losing interest in the Internet or if some kind of Internet “fatigue” had set in. PricewaterhouseCoopers, the business consulting firm, reported in November that the average American user spent 4.2 hours a week on the internet, 1 hour less than in 1999. And a few weeks ago, Nielsen/NetRatings, an Internet audience-measuring company, reported that the average time a person spent online totaled 14.9 hours during the month of December, a drop from 16.5 hours in November and 17.5 hours in October.

Our data suggest the time the average person spent online on the average day dropped by a few minutes between May-June and November-December. There was a slight decrease at the end of the year in the number of people who use the Internet for two or more hours and a slight increase in the number who use the Internet for between an hour and two hours a day. This fractional decline could be explained by several factors. Some measuring services have noted a regular seasonal drop in Internet use in the Thanksgiving-Christmas-Chanukah period in previous years and this might have happened in 2000. The drop also might be explained by the changing nature of the Internet population. Newcomers use the Internet less often and for shorter periods than veterans do and the arrival of so many newcomers to the Internet population in the past year might help explain why the time spent online by the “average” user is dropping. 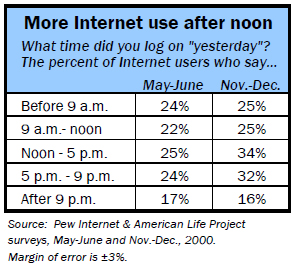 In addition, we found some evidence that people are using the Internet more frequently at different times of the day. The late-year survey showed there were striking increases in Internet usage during the afternoon and early evening on a typical day online. This might result from seasonal factors. As weather got more rugged, it is likely more people were indoors during the afternoon and early evening.

The increase in the overall online population is just part of the story about how online life is being embraced enthusiastically by Americans. Comparing mid-year to end-of-year traffic, more Americans were going online on a typical day to read and send email, and checking out several features of the Web at the end of the year. It is also important to note that the overall increase in the daily Internet population contains substantial increases among some types of online Americans – an indicator that the network is becoming more valuable to users as more and more people go online. In the most basic terms: A higher percentage of a bigger population were going online each day at the end of 2000 than were accessing the Internet on a typical day in May-June. 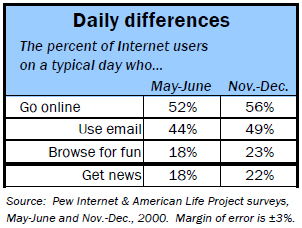 For African-Americans, the sharp increase in the daily population is particularly significant. In the last weeks of 2000, 44% of blacks with Internet access were online on a typical day; that is up from 37% in May-June. We noted in earlier reports that one element of the digital differences between whites and blacks related to daily use of the Internet: At mid-year we found that whites were much more likely than blacks to be online on a typical day. The November-December survey shows that African-Americans are increasingly likely to find uses for the Internet on a typical day and the gap between blacks and whites in the daily Internet population is shrinking.

Some other increases in the daily Internet population worth noting came among the middle aged (those between 30 and 49), those with some college education or a college degree, those in households earning less than $30,000 or over $50,000, and those who are parents of children under 18.

The election and the disputed result

One major source of traffic to the Internet in the final weeks of 2000 was the presidential election and the dispute over the results. We have reported elsewhere that the number of Americans who got campaign news grew fourfold between 1996 and 2000 (see “Internet Election News Audience Seeks Convenience, Familiar Names: Youth Vote Influenced By Online Information”). Our November-December survey shows that 48% of Internet users, or about 50 million Americans, got news about the campaign from the Web. Only a third of Internet users (34%) told us in May-June that they had gotten political news and information from an online source. 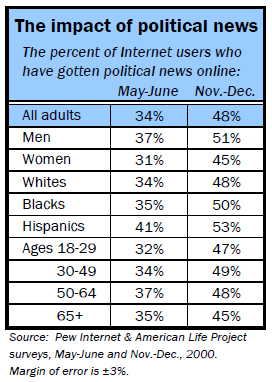 We asked respondents in both surveys about 10 Internet activities and there were increases in each, though some of them are within the margin of error. It is still important to remember that in each case, we found that a higher percentage of a bigger population is turning to the Internet to pursue these activities. Here are some of the most significant aspects of our findings related to particular activities: 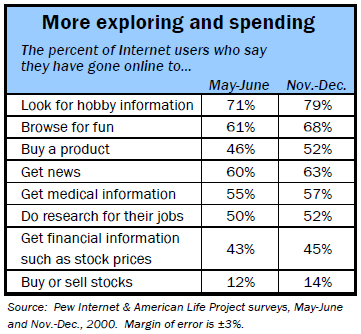