A few congregations noted that they maintain more than one email list, and that members can sign up for lists that pursue things that interest them. Yet others noted that email is more important to the congregation than is the Web site.

Among members, email is used for fellowship and faith activities, though there is a bit more of the former than the latter. Some 91% of respondents said the congregation members exchange email for fellowship purposes; 36% said this kind of exchange is done a great deal. And 87% of the respondents said that congregation members send email back and forth to support each other spiritually or to share spiritual concerns. About a third (33%) said that happened a great deal.

In addition to intra-congregational emailing, members also frequently reach out to other faith communities. Some 82% of respondents have congregation members or clergy who use email to connect with members of other congregations on spiritual issues; 25% of them say this happens a great deal. 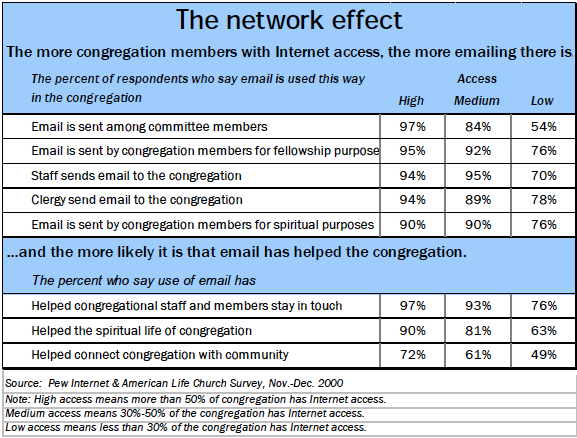 Next: Part 3: How congregational leaders use the Internet
← Prev Page
Page1Page2Page3You are reading page4Page5Page6
Next Page →