The small amount of public, scholarly, and press attention paid to religion and the Internet has mostly centered on people’s spiritual experiences online and on the emergence of religious portals such as Beliefnet.org, which provide comprehensive menus of information about different faiths, articles and commentary about spirituality, prayer rooms, church-finding search engines, and a host of other content and features. This is believed to be the first survey of individual congregations and how they use the Internet.

The most striking demographic feature related this online activity is that African-Americans with Internet access are much more likely than online whites to have sought religious and spiritual information. Fully a third of online blacks (33%) have sought religious information, compared to 20% of online whites. That means blacks are 65% more likely to have sought such information compared to whites. In relative terms, the heaviest religious-information seekers are middle-aged African-American women – 38% of black women over 30 with Internet access have gone to religious Web sites.

When it comes to spiritual institutions, the appeal of the Internet is quite clear. With an “always-on” presence on the Internet, congregations can provide a thorough depiction of themselves to those who might be too shy to enter the sanctuary or ask questions directly of members of the congregation. They can use their Web sites to allay those concerns and to display material about staff and members, their activities, and their faiths. And they can link to other Web sites to provide an abundance of material about their denomination’s beliefs, sacraments, and doctrine without having to create the content themselves. Use of email can facilitate the logistics of congregational activities and create new opportunities for mission work and outreach in greater community. The communication capabilities of the Internet are equally valuable to evangelical and non-evangelical groups, to congregations seeking to increase their membership, and to congregations focused on developing their own laity. Unlike big e-commerce sites, congregations can have both a physical and cyber-presence in a community. How they leverage their resources and promote their faith are issues of great relevance to them.

Yet, little research has been done on how individual congregations use Web sites to further their missions, spread their message, and serve their members and their communities. This study was undertaken for several reasons. First, churches and synagogues are important organizations in their neighborhoods and they are instrumental in creating tight-knit and robust networks that serve vital spiritual and fellowship needs for their members. It is important to examine how they use the Internet to serve the needs of their members and communities. Second, the vast majority of congregations existed before the Web became a vital communications tool for many Americans and their embrace of Internet tools can tell us a great deal about how the Web and email change and influence important relationships that ministers and rabbis have established with their congregations and that congregation members have with each other. Third, faith organizations are emblematic of other types of organizations that serve the social needs of people. If we begin to understand how they have exploited the Web and email, we can also being to understand the ways in which the Internet might affect fraternal organizations, social and political groups, hobby clubs, and other kinds of associations.

With those thoughts in mind, the Pew Internet Project set out to discover how congregations use their Web sites, email, and the research capabilities of the Internet. In all, 1,309 churches and synagogues responded to an email request and filled out an online survey. The faith breakdown of our respondent pool is as follows: 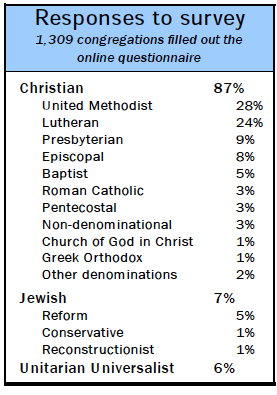