While about one-in-four Latinos are aware of the term Latinx, just 3% say they use it to describe themselves, a share that is similar across all major demographic subgroups.

Latinx use is greater among younger Latinos than older Latinos. Some 7% of those ages 18 to 29 say they have used Latinx, while 2% or fewer among those ages 30 and older say the same.

About 5% of college graduates or those have some college experience say they have used Latinx, compared with 2% of those who have a high school degree or less.

Meanwhile, 4% of Democrats and Democratic-leaning independents say they have used Latinx, compared with 1% of Republicans and Republican leaners. 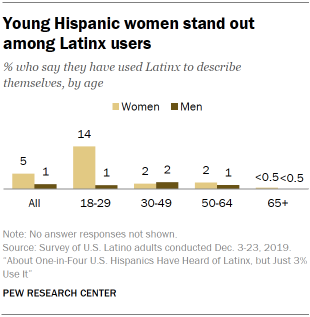 Next: 3. Views on Latinx as a pan-ethnic term for U.S. Hispanics
← Prev Page
Page1Page2You are reading page3Page4Page5Page6
Next Page →

About One-in-Four U.S. Hispanics Have Heard of Latinx, but Just 3% Use It 1. How widespread is awareness of Latinx?
2. Who uses Latinx?
3. Views on Latinx as a pan-ethnic term for U.S. Hispanics Acknowledgments Methodology