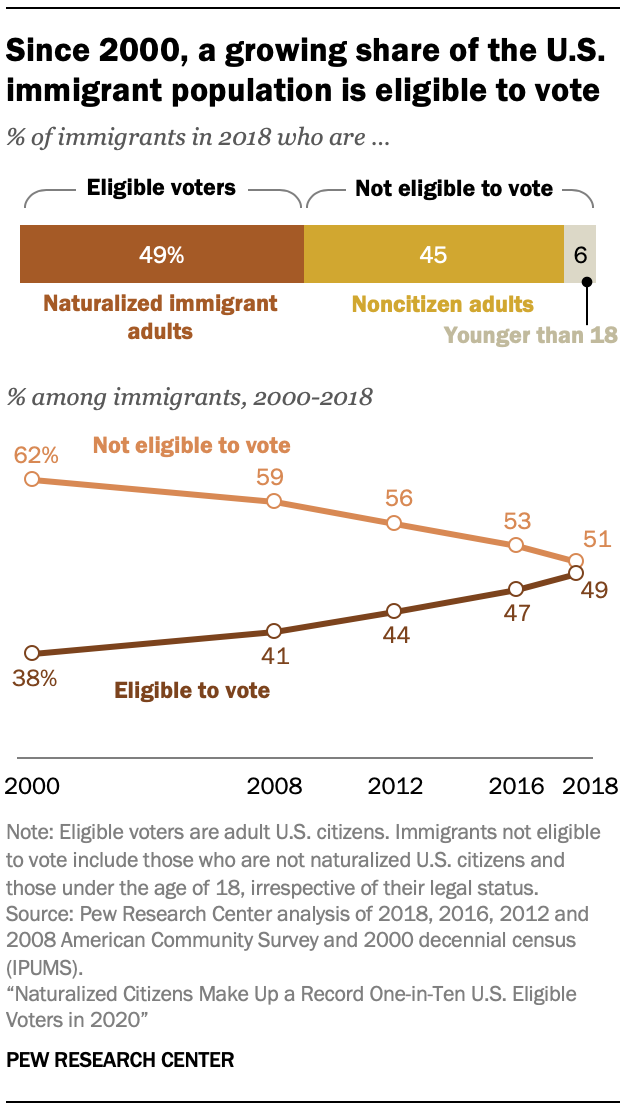 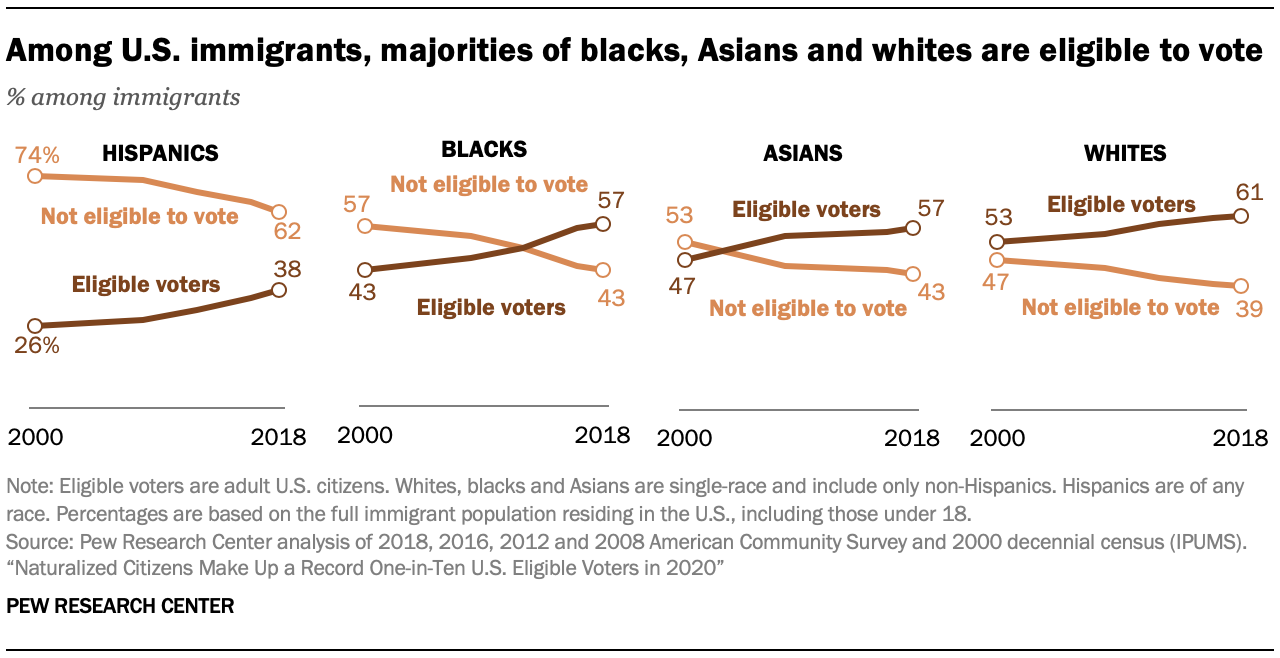 A demographic profile of the foreign-born electorate

The demographics of immigrant eligible voters differ from those of U.S.-born eligible voters in many ways: Immigrant voters are older, less proficient in English and live in households with higher incomes.

Immigrant eligible voters are older than those who are U.S. born. The median age of immigrant voters is 52, compared with 47 for the U.S. born.

Among immigrant eligible voters, nearly four-in-ten say they speak English less than very well, which is a far higher share than that among U.S.-born eligible voters (just 2%).6

Another notable difference between immigrant and U.S.-born eligible voters is level of educational attainment. Among immigrant voters, 36% have at least a bachelor’s degree, while among U.S.-born voters, the share is 30%.

Demographic differences between immigrant and U.S.-born eligible voters vary by race and ethnicity 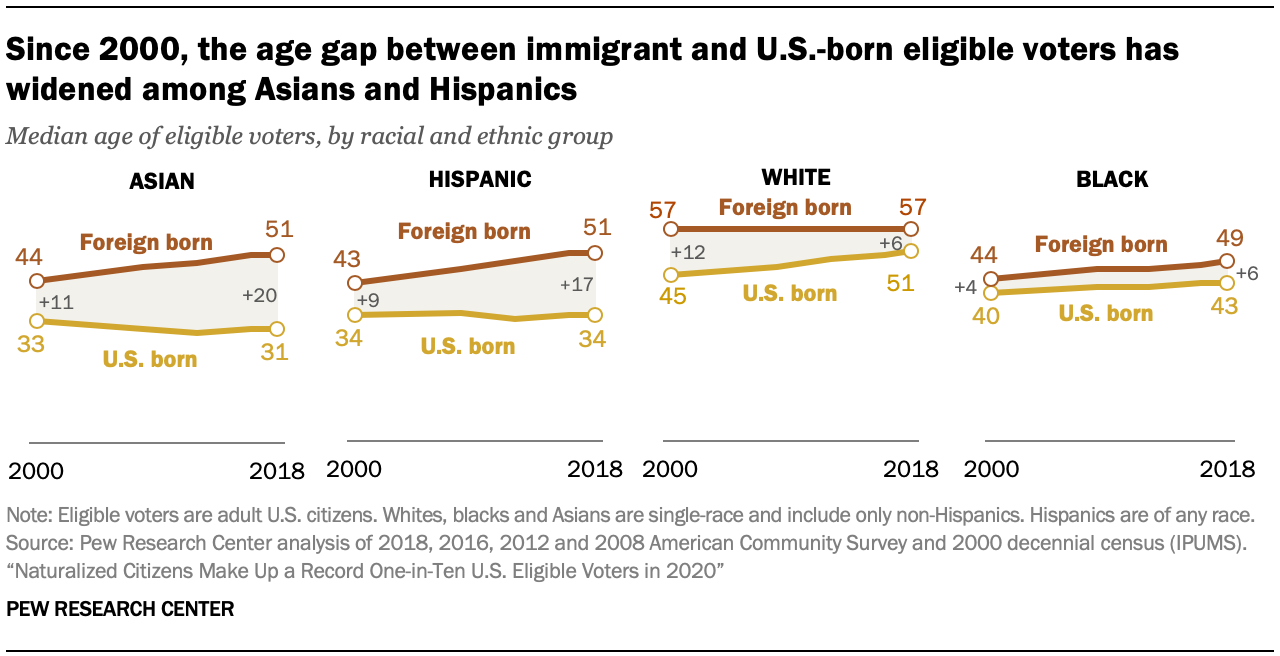 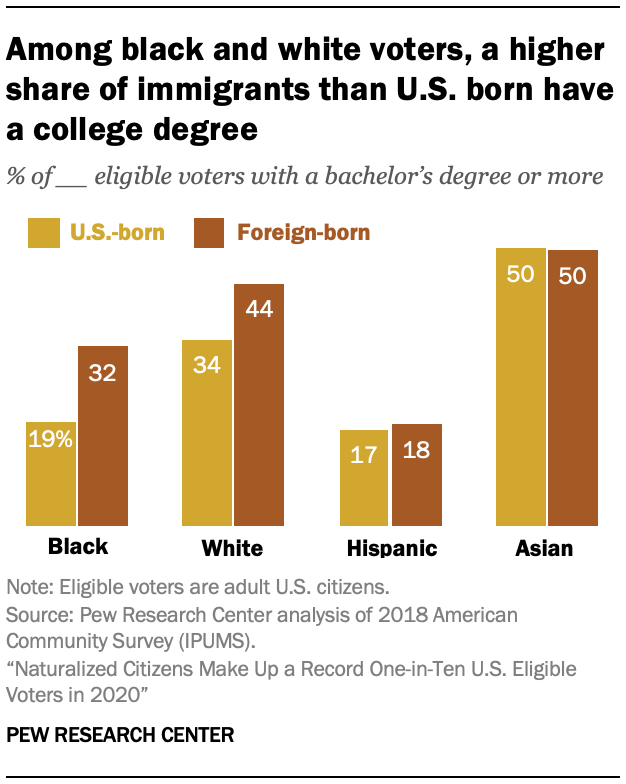 Meanwhile, the age gap between immigrant and U.S.-born white eligible voters has narrowed, falling from 12 years in 2000 to six in 2018. By contrast, the median age gap has changed little over the same period for black eligible voters.

The widening age gap between Asian and Hispanic eligible voters is the result of the changing demographics and naturalization rates for both groups. Even though Asians make up the largest group of new immigrant arrivals, not all immigrants from Asia become U.S. citizens. And those who have become citizens tend to be older and have lived in the U.S. for longer. Meanwhile, for Hispanics, immigration from Latin America has slowed sharply in the last decade. As a result, Hispanic immigrants with U.S. citizenship are aging. At the same time, U.S. births to Hispanic parents have been the principal driver of Hispanic population growth for nearly two decades. Young Hispanics born in the U.S. are now entering adulthood in large numbers, bringing down the median age of U.S.-born Hispanic eligible voters.

When it comes to educational attainment, black and white eligible voters have the widest gaps between immigrants and the U.S. born. Among black voters, 32% of immigrants have a bachelor’s degree or more, compared with 19% of the U.S. born. This 13 percentage point gap is the largest of the racial or ethnic groups included in this analysis.

Among white eligible voters, 44% of immigrants have a bachelor’s degree or more, while 34% of the U.S. born do, a gap of 10 points. By contrast, there is little to no gap in educational attainment among Asian or Hispanic eligible voters.

Next: 2. The nation’s most populous states are home to most immigrant voters
← Prev Page
Page1You are reading page2Page3Page4Page5Page6
Next Page →

Naturalized Citizens Make Up Record One-in-Ten U.S. Eligible Voters in 2020
1. U.S. immigrants are rising in number, but just half are eligible to vote
A demographic profile of the foreign-born electorateDemographic differences between immigrant and U.S.-born eligible voters vary by race and ethnicity
2. The nation’s most populous states are home to most immigrant voters Acknowledgments Methodology Appendix: Immigrant eligible voters by state