The U.S. Senate Committee on Homeland Security and Governmental Affairs will hold a hearing on March 26 at 10 a.m. titled “Securing the Border: Defining the Current Population Living in the Shadows and Addressing Future Flows.” You can read Pew Research Center Senior Demographer Jeffrey Passel’s testimony below and watch a webcast of the hearing here.

Hearing on:
Securing the Border:
Defining the Current Population Living in the Shadows and Addressing Future Flows

Chairman Johnson, Ranking member Carper and members of the Committee, thank you for the invitation to testify at this hearing about estimates of the numbers and trends of unauthorized immigrants, their distribution across states and their role in the labor force. I am appearing as the principal author of several recent Pew Research Center reports on these topics. The Pew Research Center does not take positions on policy issues. We are a nonpartisan “fact tank” that generates information we hope will be of value to policymakers. My testimony today summarizes some of the key findings of our research. 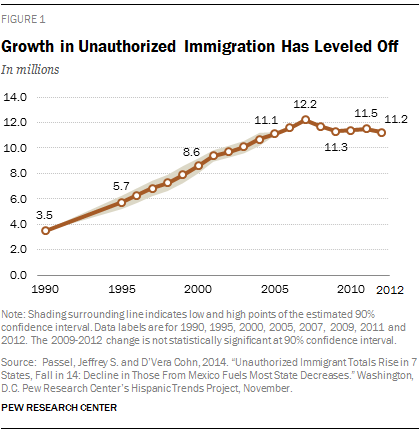 These growth differentials led to a marked shift in the distribution of unauthorized immigrants across the country. The share in California dropped to 23% in 2007 from 42% in 1990. The share in the other five large states was unchanged at 38%, but the share in the rest of the country essentially doubled, to 39% in 2007 from 20% in 1990. With the overall decreases in the unauthorized immigrant population since 2007, these shifts came to a halt. 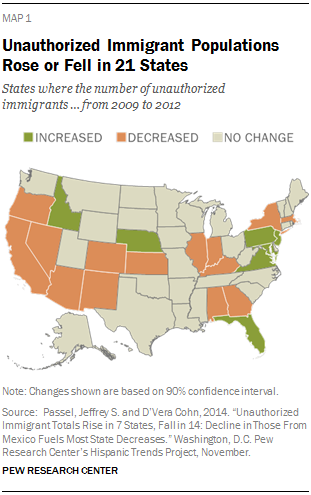 Five East Coast states were among those where the number of unauthorized immigrants grew from 2009 to 2012—Florida, Maryland, New Jersey, Pennsylvania and Virginia. Numbers also rose in Idaho and Nebraska, according to the center’s estimates. (See Map 1.)

Six Western states are among those with declines in unauthorized immigrant populations from 2009 to 2012—Arizona, California, Colorado, Nevada, New Mexico and Oregon. Other states with decreases over that period are in the South (Alabama, Georgia and Kentucky), the Midwest (Illinois, Indiana and Kansas) and the Northeast (Massachusetts and New York).

Mexicans are a majority of unauthorized immigrants (52% in 2012), but both their numbers and share have declined in recent years, according to Pew Research estimates. Although the U.S. population of unauthorized immigrants was stable from 2009 to 2012, the number of Mexicans in this population fell by about half a million people during those years. According to the Pew Research Center estimates, there were 5.9 million Mexican unauthorized immigrants in 2012, compared with 6.4 million in 2009 and 6.9 million in 2007. (See Figure A1 in Appendix A.) The decline likely resulted from both an increase in departures to Mexico and a decrease in arrivals from Mexico (Passel, Cohn and Gonzalez-Barrera, 2012).

States with low shares of Mexicans include some in the Northeast: New Hampshire (7%), Rhode Island (6%) and Massachusetts (3%). Hawaii’s share was 7%.

Unauthorized Immigrants in the Labor Force

The 8.1 million unauthorized immigrants who were working or looking for work in 2012 made up 5.1% of the labor force or about one-in-twenty U.S. workers. Both of those estimates are unchanged from 2009. The number in the labor force has remained between 8.1 million and 8.3 million since 2007. (See Figure A2 in Appendix A.) The share of unauthorized immigrants in the workforce peaked in 2007, at 5.4%. 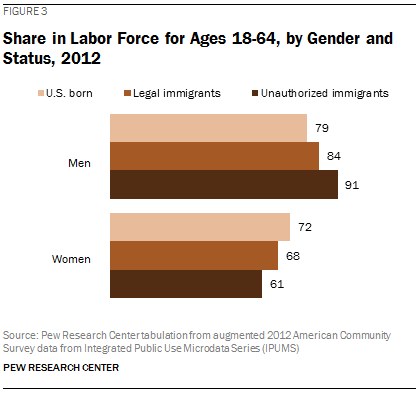 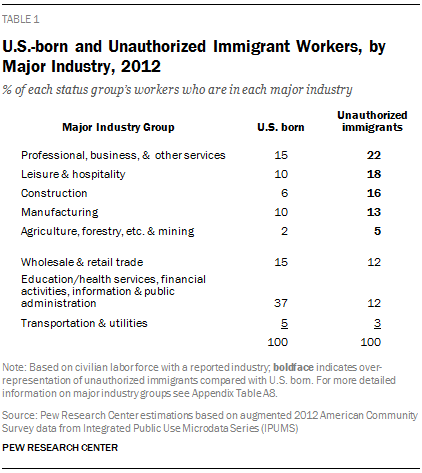 Looked at using another metric—the unauthorized-immigrant share of the total workforce—it becomes clear that they are particularly concentrated in some subsets of each major industry. In 2012, they represented 24% of workers in the landscaping industry, 23% of those in private household employment, 20% of those in apparel manufacturing, 20% in crop production, 19% in the dry cleaning and laundry industry and 19% of those in building maintenance. These figures are much larger than unauthorized immigrants’ share of the overall workforce—5.1%. (Figure 4 below shows major industry concentrations. A more extensive listing of detailed industries is shown in Appendix Table A7.) 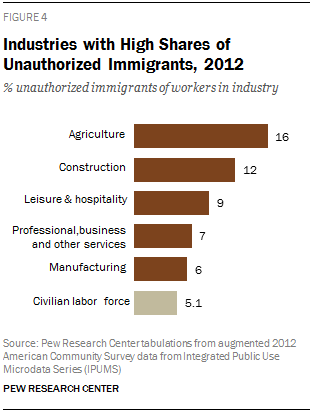 Among unauthorized immigrants in the labor force, 33% are service workers, 15% are construction workers and 14% are production and installation workers. Almost two-thirds (62%) of unauthorized immigrant workers have occupations in these three broad categories; by contrast, only half that share (31%) of U.S.-born workers have such occupations. (See Table 2. Appendix Table A9 has data on the composition of all major occupation groups.) 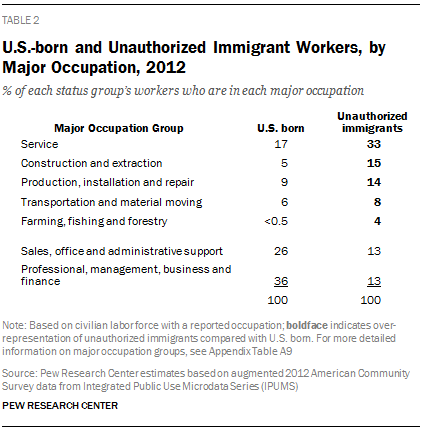 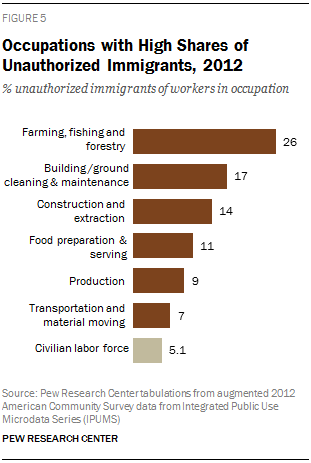 Next: Appendix A: Additional Charts and Tables
← Prev Page
You are reading page1Page2Page3Page4
Next Page →