Unauthorized immigrants living in the United States are more geographically dispersed than in the past and are more likely than either U.S. born residents or legal immigrants to live in a household with a spouse and children. In addition, a growing share of the children of unauthorized immigrant parents—73%—were born in this country and are U.S. citizens.

Based on March 2008 data collected by the Census Bureau, the Center estimates that unauthorized immigrants are 4% of the nation’s population and 5.4% of its workforce. Their children, both those who are unauthorized immigrants themselves and those who are U.S. citizens, make up 6.8% of the students enrolled in the nation’s elementary and secondary schools. 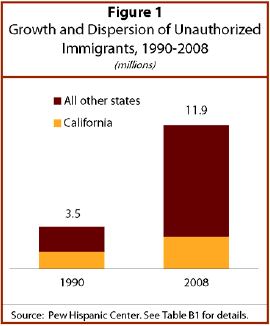 Unauthorized immigrants are spread more broadly than in the past into states where relatively few had settled two decades ago. This is especially true in Georgia, North Carolina and other southeastern states. Long-time immigrant destinations, including Florida, Illinois, New Jersey, New York and Texas, also have retained their appeal to undocumented migrants. 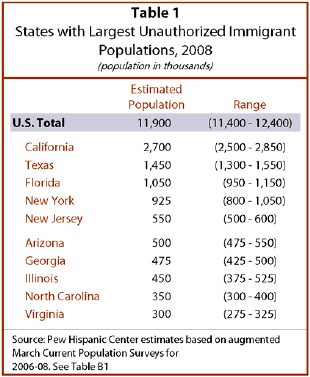 However, growth of this population has slowed in California. Although the Golden State still houses the largest number of undocumented migrants—2.7 million, or almost double the number in 1990—it is home to a markedly smaller proportion of them. Its 42% share in 1990 declined to 22% in 2008. 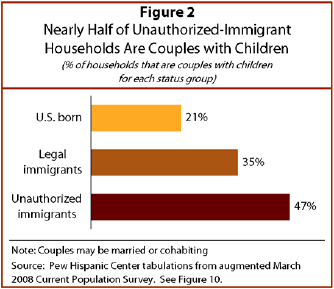 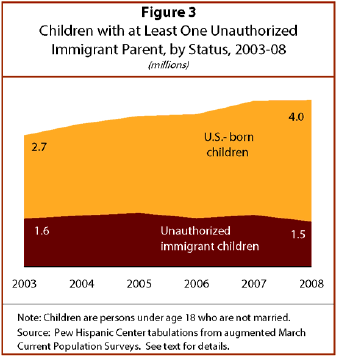 Children of unauthorized immigrants are a growing share of students in kindergarten through grade 12. The Center, analyzing this group for the first time, estimates that 6.8% of K-12 students have at least one parent who was undocumented in 2008. In five states, about 10% or more of students are children of undocumented-immigrant parents. Most of these children, having been born in the United States, are U.S. citizens. 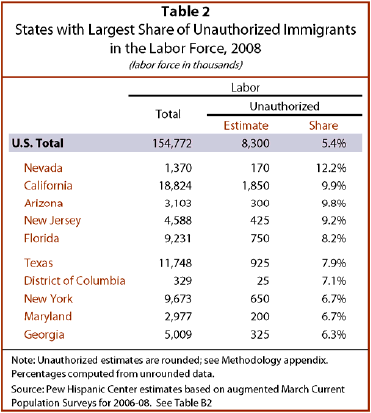 The nation’s labor force of 154 million people includes an estimated 8.3 million unauthorized immigrants. The 5.4% unauthorized-immigrant share of the labor force in 2008 rose rapidly from 4.3% in 2003, and has leveled off since 2007. The estimate for 2008 is not significantly different from 2007, so any assessment of recent trend is inconclusive because of the margin of error in these estimates. 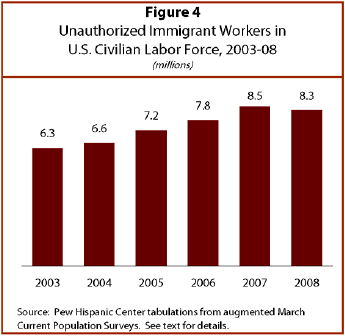 Among states, the proportion of unauthorized workers varies widely: They constitute roughly 10% or more of the labor force in Arizona, California and Nevada, but less than 2.5% in most Midwest and Plains states. They are especially likely to hold low-skilled jobs and their share of some of those occupations has grown. In 2008, 17% of construction workers were undocumented, an increase from 10% in 2003. One in four farmworkers is an unauthorized immigrant. 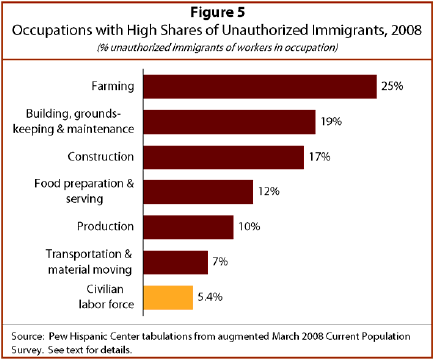 The estimates reports here are based mainly on data from March Current Population Surveys, conducted by the Census Bureau, through 2008, augmented with legal status assignments and adjusted to correct for undercount; some estimates are from the 2000 and 1990 Censuses. The Census Bureau asks people where they were born but does not ask people their immigration status, so the estimate of the size of the population is derived by employing a widely accepted methodology that has been used in previous reports on topic. Essentially, it subtracthe estimated legal-immigrant population from the total foreign-born population and treats the residual as an estimate of the unauthorized population. The information on characteristics of status groups is developed by assigning legal statusindividual respondents wholikely to be legal or unauthorized using probabilistic methods designed to produce results agreeing with the residual estimates. [For more details, see Methodology appendix.]

These unauthorized immigrants consist of residents of the United States who are not U.S. citizens, who do not hold current permanent resident visas or who have not been granted permission under a set of specific authorized temporary statuses for longer-term residence and work. The vast majority of undocumented immigrants either entered the country without valid documents or arrived with valid visas but stayed past their visa expiration date or otherwise violated the terms of their admission.

Also included in this group are some people who had entered without valid documents or violated the terms of their visas but later obtained temporary authorization to live and work in the United States. Among them are immigrants from certain countries holding temporary protected status (TPS) or people who have filed for asylum status but whose claims are unresolved. This group may account for as much as 10% of the unauthorized immigrant estimate. Many of these “quasi-legal” individuals could revert to unauthorized status.

“Children” are people under age 18 who are not married. “Adults” are ages 18 and older.

Next: II. Where Do They Live?
← Prev Page
You are reading page1Page2Page3Page4Page5Page6Page7Page8Page9
Next Page →