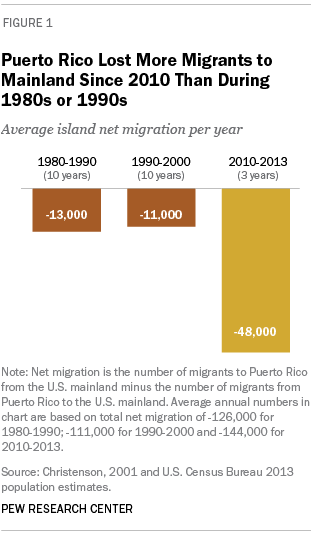 Puerto Ricans have left the financially troubled island for the U.S. mainland this decade in their largest numbers since the Great Migration after World War II, citing job-related reasons above all others.

U.S. Census Bureau data show that 144,000 more people left the island for the mainland than the other way around from mid-2010 to 2013, a larger gap between emigrants and migrants than during the entire decades of the 1970s, 1980s or 1990s. This escalated loss of migrants fueled the island’s first sustained population decline in its history as a U.S. territory, even as the stateside Puerto Rican population grew briskly.

Puerto Ricans who arrived from the island since 2000 are different from earlier waves of Puerto Rican migrants. For example, recent migrants are less likely than earlier migrants were to settle in traditional Northeast communities and more likely to live in the South, especially in Florida. More recent Puerto Rican arrivals from the island are also less well off than earlier migrants, with lower household incomes and a greater likelihood of living in poverty.

Puerto Ricans on the U.S. Mainland 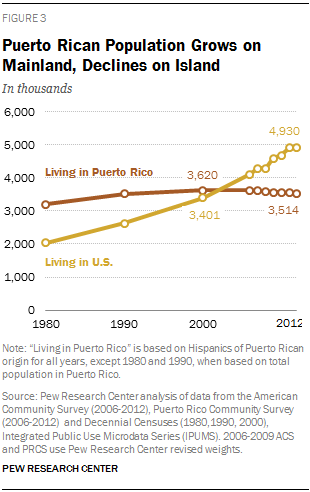 On the mainland, Puerto Ricans are the second largest Hispanic origin group (Brown and Patten, 2014), following Mexicans (34 million in 2012) and ahead of Cubans (2 million) and Salvadorans (2 million). Compared with other U.S. Hispanics, Puerto Ricans overall are somewhat worse off on several indicators of well-being. They have lower median household incomes and a lower homeownership rate, and are more likely to be poor. However, Puerto Ricans overall (especially those born on the mainland) have higher education levels than other U.S. Hispanics. 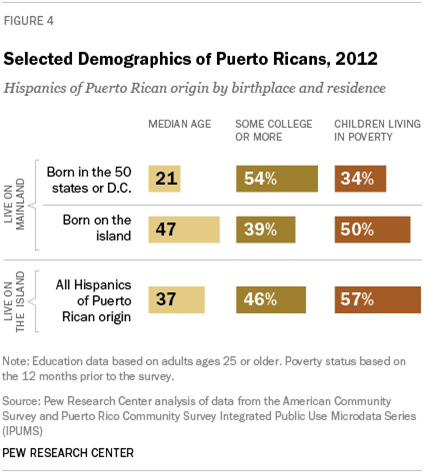 Mainland-born Puerto Ricans are younger and have higher household incomes, and their children or elderly are less likely to be in poverty. They are more likely to have attended college than their island-born counterparts.

The South—particularly Florida—has been the top regional destination in recent years for Puerto Ricans moving from the island to the mainland and for Puerto Ricans relocating from other regions within the U.S. However, New York has been the single biggest state magnet for migrants: According to a Pew Research Center analysis of U.S. Census Bureau data, among Puerto Ricans between 2006-2012, 31% of moves from the island to the mainland and 20% of moves from one state to another state were to the Empire State.

Puerto Ricans on the Island

As U.S. citizens, people born in Puerto Rico can move to the 50 states or District of Columbia without restrictions, and there is a long Puerto Rican tradition of back-and-forth migration between the island and mainland. 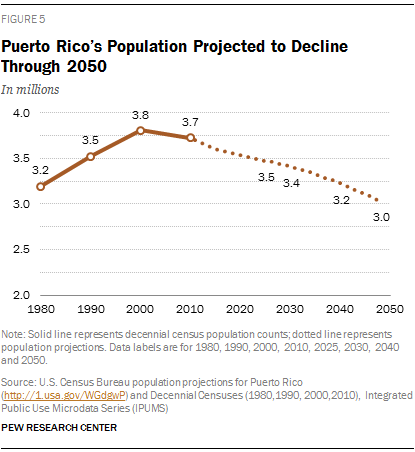 However, the gap between the number of departures and arrivals has widened in recent years, according to U.S. Census Bureau data that indicate a growing net loss of migrants. That loss, as well as the island’s relatively low birth rate, has produced its recent population decline.

The island’s total population (including Hispanics and non-Hispanics) decreased by about 200,000 people from 2000 to 2013, with about two-thirds of Puerto Rican municipalities having lost population during those years (see maps). The Census Bureau projects the island’s population loss will continue gradually through at least 2050, when about 3 million people will live there.4

Measuring Migration from Puerto Rico to the Mainland

One challenge in comparing current migration from Puerto Rico with that of the great migration wave of the 1950s and 1960s is a shortage of reliable data. In previous decades, estimates were made mainly using figures for airline passenger traffic between the island and mainland. However, U.S. Census Bureau researchers have concluded that this method produced estimates that were too high (Christenson, 2001).

Puerto Rico’s recent population downturn reverses a general pattern of growth on the island since at least the 1700s, as documented by Spanish and U.S. Census Bureau data. The United States won control of Puerto Rico from Spain in 1898; the first U.S. census taken there, in 1910, counted more than 1.1 million residents. By 1990, the population had more than tripled, to 3.5 million, and peaked at 4 million in 2009. But by 2013, the island’s population had diminished to 3.6 million.6

The years since 2000 have seen the largest wave of migration from Puerto Rico since the “Great Migration” in the 1950s and 1960s (Rodríguez Ayuso, Santana and Santiago, 2013; see text box). According to Census Bureau researchers, the island had a net loss to the mainland of 192,000 migrants younger than 65 for the years from the 2000 census to the 2010 census (Bhaskar et al, 2013). From July 2010 to July 2013, about 144,000 more people of all ages left the island for the mainland than the other way around, according to Census Bureau population estimates. (Most but not all were Hispanics of Puerto Rican origin.)

The onset of an economic crisis in 2006 that weakened the already-listless Puerto Rican economy likely played a role in the island’s accelerated population decline. More recent migrants to the mainland have been found to be less educated than those who remain on the island and more likely to hold less skilled jobs (Mora, Davila and Rodriguez, 2014).

About The Term “Puerto Rican”

According to a 2012 report on the Puerto Rican economy by the Federal Reserve Bank of New York, “Puerto Rico’s economic progress has stalled: the Island has been operating below its potential for some time and the competitiveness of the economy continues to deteriorate.” The report cited persistently high unemployment and a low labor force participation rate, as well as heavy reliance on transfer payments such as food stamps (Federal Reserve Bank of New York, 2012).

Still, the 2012 Federal Reserve Bank of New York report also pointed to strengths in the island’s economy, such as improving levels of schooling and a bilingual workforce. The island also benefits from ties to the U.S. and the easy access of island residents to the mainland.

This report explores the demographic and economic characteristics of Hispanics of Puerto Rican origin, both on the island of Puerto Rico and on the U.S. mainland. It also analyzes characteristics of recent migrants from the island to the mainland and compares them with those of previous waves of migrants. The data in this report come from the U.S. Census Bureau’s American Community Survey, Puerto Rican Community Survey, Current Population Survey, decennial censuses and annual population estimates.

This report is a collaborative effort based on the input and analysis of the following individuals on the staff of the Pew Research Center. Editorial guidance came from Director of Hispanic Research Mark Hugo Lopez. D’Vera Cohn, senior writer, wrote the report’s overview and demographic chapters, based mainly on analysis by Eileen Patten, research analyst, who also prepared most of its charts and tables. Danielle Cuddington, research assistant, assembled data for the Puerto Rico maps that are in this report and online. The authors thank Jeffrey S. Passel, senior demographer, for his expertise on data use. The authors also thank Edwin Melendez of Hunter College and participants at the American Society of Hispanic Economists’ session “The Puerto Rican Economy, Migration and Employment Outcomes” at the 2014 Western Economic Association conference for comments on a previous version of the report. Anna Brown, research assistant, number-checked the report and charts; Molly Rohal, communications associate, copy-edited the report. Find related reports from the Pew Research Center online at pewresearch.org/hispanic.

“Puerto Rican,” unless otherwise specified, refers to those who self-identify as Hispanics of Puerto Rican origin, either because they were born in Puerto Rico or trace their family ancestry there.

“U.S. mainland” or “mainland” or “stateside” refer to the 50 states (including Alaska and Hawaii) and the District of Columbia. “Island” refers to Puerto Rico.

Next: Chapter 1: Puerto Ricans on the U.S. Mainland
← Prev Page
You are reading page1Page2Page3Page4Page5Page6Page7Page8
Next Page →