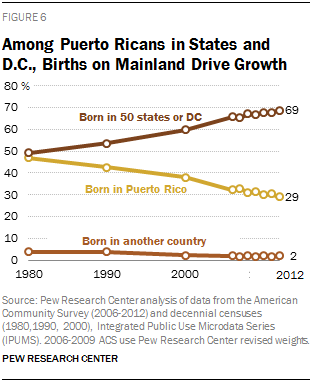 Puerto Rican origin population growth has been powered mainly by an increase in those born in the 50 states or the District of Columbia, rather than by the increasing influx of migrants from the island. Mainland-born Puerto Ricans made up 69% of stateside Puerto Ricans in 2012, and their share has grown in recent years. This group has more than tripled in size since 1980 (1 million to 3.4 million), and grew 21% from 2007 to 2012.

In terms of language skills, Puerto Ricans (83%) are more likely than other U.S. mainland Hispanics (66%) to be proficient in English, meaning that they speak it very well or only speak English at home. The overall number is driven by high English proficiency among those born in the 50 states or District of Columbia (95%), compared with lower proficiency among the island born (60%).

Among Puerto Ricans living in the 50 U.S. states and District of Columbia, a higher share of adults ages 25 and older has attended or graduated from college (48%) than is true for other U.S. Hispanics. A lower share has no more than a high school education (52% to 64% in 2012).

Half of the nation’s Puerto Rican origin population lives in the Northeast (52% in 2012), 30% live in the South and the remainder is split between the Midwest and West.7

The local impact of these trends can be seen in a Pew Research analysis of data for the nation’s roughly 360 counties with at least a thousand Puerto Rican residents in 2010.

Only five counties out of those with at least a thousand Puerto Rican residents—all in the greater New York metropolitan area—experienced declines in their Puerto Rican populations from 2000 to 2010. Four—Bronx, Kings, New York and Queens counties—are in New York state, and the fifth was Hudson County, N.J. Of the five counties with sharpest growth in their Puerto Rican populations during this period, three are in the South—Union County, N.C.; Paulding County, Ga.; and Forsyth County, Ga. The others were Pinal County, Ariz., and Kendall County, Ill. 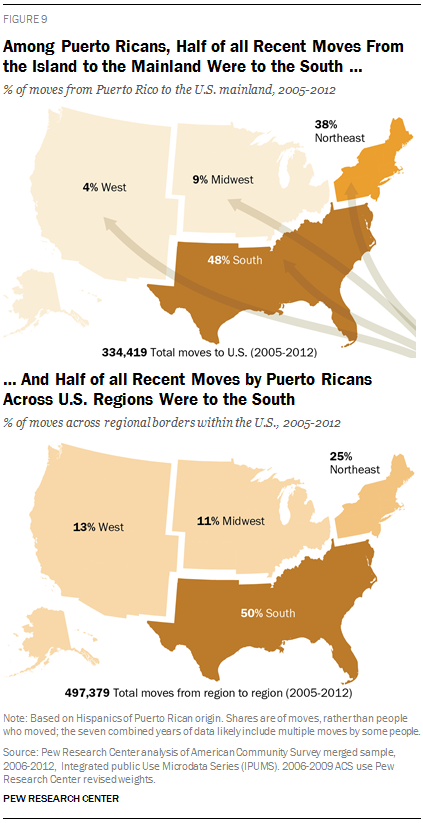 The South was the top regional destination for recent moves by Hispanics of Puerto Rican origin from the island to the mainland, according to a Pew Research analysis of American Community Survey estimates for 2006 to 2012. Among all 334,000 moves during that period, 48% were to the South, including 31% to Florida, the state that attracted the largest share. New York, the next most popular state, accounted for 10% of recent moves off the island by Hispanics of Puerto Rican origin.9

Among all Puerto Ricans who relocated from one region to another from 2006 to 2012, the South again was the top regional destination. The South was the first-choice region for the majority of moves by Puerto Ricans leaving the Northeast (81%), Midwest (56%) and West (60%).

New York and Florida were the most likely destinations that Puerto Ricans moved to from other states. About one-in-five moves (20%) were to New York and one-in-seven (14%) to Florida. About three-in-ten (31%) moves to Florida were from New York, and about the same share (29%) was in the other direction. Texas, which some research (Garcia-Ellin, 2014) has pinpointed as a new destination state for Puerto Ricans, especially the mainland born, attracted movers from many states and accounted for 6% of moves during the 2006 to 2012 period. The highest share (21%) came from Florida, while 9% came from both New York and California.