The U.S. Census Bureau makes adjustments to the population controls in the Current Population Survey each January. That means the sample weights are revised so that estimates from the CPS agree with pre-specified national population totals by age, sex, race and Hispanic origin and with state level totals by age, sex and race. The annual adjustments to CPS weights are typically based on revised estimates of net international migration and updated vital statistics. Methodological changes also play a role. In the 2007 and 2008 population estimates, introduced into the CPS in January 2008 and January 2009, respectively, the Census Bureau made significant changes in the methodology used to measure international migration from 2000 onward. Another major revision was the introduction of the Census 2010 population base in January 2012.

Labor market statistics published by the BLS are not revised historically to account for the effect of annual revisions to CPS weights or for the effect of introducing the Census 2010 population base. The estimates in this report are adjusted in two ways to account for the revisions of the CPS. First, the estimates for 2007 to 2008 are produced using reweighted data that incorporate the Vintage 2008 population estimates for the civilian non-institutional population (Vintage 2008 population controls were introduced into the CPS in January 2009). The new weights are derived using procedures that follow the weighting procedures of the U.S. Census Bureau (2006) to the extent possible with public-use data applied to Vintage 2008 population estimates—both published and unpublished data supplied by the U.S. Census Bureau to the Pew Research Center (see Passel and Cohn, 2010, for additional details).

Second, estimates for 2007 to 2012 are revised to account for the effects of CPS revisions from January 2010 to January 2013 using a BLS-published methodology (Di Natale, 2003). This methodology is used to produce revised estimates for the overall Hispanic and non-Hispanic populations, and for the white, black and Asian populations after making adjustments to remove Hispanics from these racial groups. The overall revisions to the Hispanic and non-Hispanic estimates are further allocated by nativity based on the distributions of the populations by nativity in any given quarter. 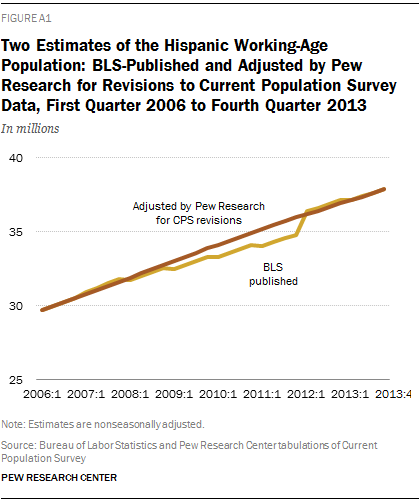 Next: Appendix B: Data Tables
← Prev Page
Page1Page2Page3Page4Page5Page6Page7Page8You are reading page9Page10
Next Page →