During the decades-long emigration wave of Mexicans to the United States, Mexico has experienced a wide array of economic, demographic and social changes, some of which undoubtedly have had an impact on Mexican migration trends. This section offers a brief overview of the major changes.

Mexico today is the world’s 11th-largest country by population with 115 million people13 and the world’s 11th-largest economy as measured by gross domestic product (World Bank, 2011).14 The World Bank characterizes Mexico as an “upper-middle income economy,” placing it in the same category as Brazil, Turkey, Russia, South Africa and China. Mexico is also the most populous Spanish-speaking country in the world. 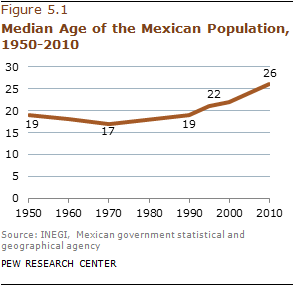 The most significant demographic change in Mexico in recent decades has been the sharp and ongoing decline in birth rates. In 1960, the Mexican fertility rate was 7.3 children per woman.15 By 2009, that figure had dropped to 2.4—still a bit higher than the U.S. rate of 2.0 among all women (Pew Hispanic Center, 2011). 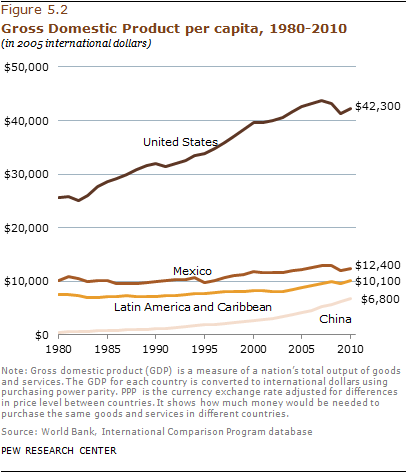 In more recent years, Mexico’s economy, like that of the United States and other countries, fell into a deep recession in 2007-2009. But since 2010 it has experienced a stronger recovery than has its neighbor to the north; according to INEGI, the Mexican GDP grew by 5.5% in 2010 and 3.9% in 2011, well above the rates in the U.S. for those two years. 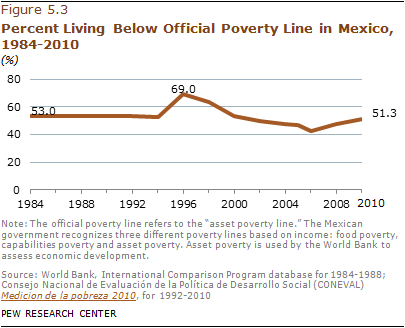 Despite a moderate long-term rise in per capita GDP, the share of Mexicans who live below the poverty line has not changed significantly in recent decades. It was 51% in 2010, down slightly from 53% in 1984. However, that overall stability was interrupted by a major economic crisis and recession in Mexico during the mid-1990s that sent the poverty rate soaring to a peak of 69% in 1996. 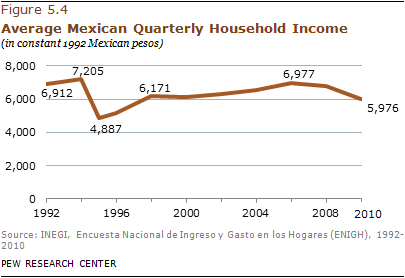 Even though economic performance in Mexico has been sluggish in recent decades and insufficient to generate enough jobs for young adults coming of age, other indicators of development have improved. For example, 92.4% of all Mexicans ages 15 and older were literate in 2010, up from 83% in 1980.19 In 2010, the average number of years of education of Mexicans ages 15 and older was 8.6, compared with 7.3 years in 2000.20

In terms of health care, almost three-in-five (59%) Mexicans in 2000 lacked health care coverage (CONEVAL, 2010). In 2003, the Mexican federal government created a health care program, Seguro Popular, that provides basic coverage to the uninsured and is free for those living under the poverty line (Comisión Nacional de Protección Social en Salud, 2012). The share of the Mexican population with access to health care had increased from less than half (41%) in 2000 to slightly more than two-thirds (67%) in 2010, an increase of 26 percentage points (CONEVAL, 2010). 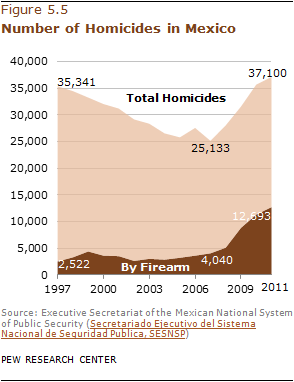 Mexico has also had its share of problems in recent years—none greater than the spike in violence tied to criminal drug cartels. There were 37,100 homicides in Mexico in 2011, an increase of 44% since 2005. In addition, a rising share of homicides involves firearms—12,693 in 2011, up from 3,209 in 2005—which have been one of the signatures of killings linked to drug cartels.21

But crime in general, and homicide in particular, is by no means a new problem in Mexico. The number of homicides in 2011 is only slightly higher than the number back in 1997—35,341. Homicide rates fell steadily from the late 1990s through 2005, just as they had around the world, but then, sparked mainly by the drug wars, reversed and began climbing up again.

Mexico’s public is very concerned about crime; in surveys taken during the past decade by the Pew Global Attitudes Project, the issue of crime is consistently identified by Mexicans as a top national problem. In a 2011 survey, 80% of respondents said crime was a very big problem, and 77% said the same about drug-related violence (Pew Global Attitudes Project, 2011). The next most serious problems, in the view of the Mexican public, were rising prices (74% said this was a very big problem); illegal drugs (71%); lack of jobs (70%); and the economic situation (69%). In the United States, by contrast, concerns about jobs and the economy far outstrip all other issues in similar surveys about national conditions (Pew People & the Press, 2012).

Attitudes About the Economy, Immigration 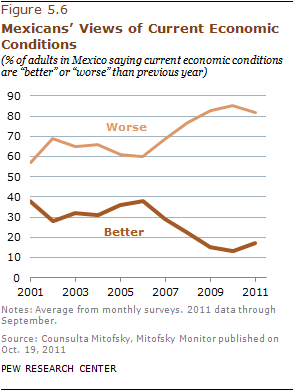 Looking at measures such as employment and GDP growth, Mexico has not been as hard hit by the recent economic downturn as the U.S. Even so, Mexicans have a very pessimistic view of their national economy. According to Consulta Mitofsky, a Mexican survey research group, in 2011, 82% of Mexicans said the economic situation in their country was getting worse, up from 60% who said the same in 2006 and 57% who said so in 2001 (Consulta Mitofsky, 2011).

Next: VI. Characteristics of Mexican-Born Immigrants Living in the U.S.
← Prev Page
Page1Page2Page3Page4You are reading page5Page6Page7Page8Page9
Next Page →

The Mexican-American Boom: Births Overtake Immigration
More Mexicans Leaving Than Coming to the U.S.
A Demographic Portrait of Mexican-Origin Hispanics in the United States
Mexican Immigrants: How Many Come? How Many Leave?
A Nation of Immigrants