When it comes to their views of the U.S., Latinos are generally positive. They see the U.S. as better than the countries of their ancestors on a number of dimensions—but not all. And when comparing the Latino experience in the U.S with the experience of other minority groups, Latinos see themselves, for the most part, at least as successful as others. They also believe in the efficacy of hard work—more so than the general public. Even so, Latinos in the U.S. express less personal trust of others than the general public.

Latino Success in the U.S. 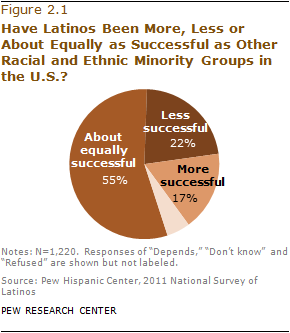 Belief in the Importance of Hard Work 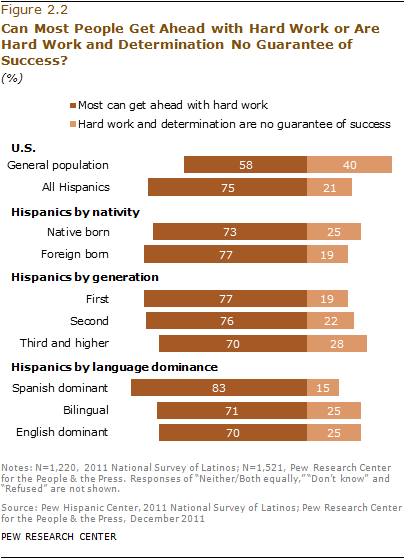 When it comes to personal trust, most Latinos say you can’t be too careful when dealing with people. Some 86% of Hispanics say this, while 12% say people can be trusted.

Even though large majorities of Latinos say you can’t be too careful when dealing with people, some small differences are evident among subgroups. Foreign-born Latinos are somewhat more distrustful of others than are U.S.-born Latinos—89% versus 81%. 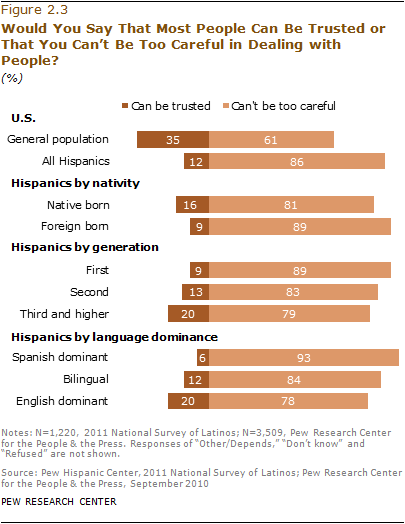 Latinos’ Views of the U.S. 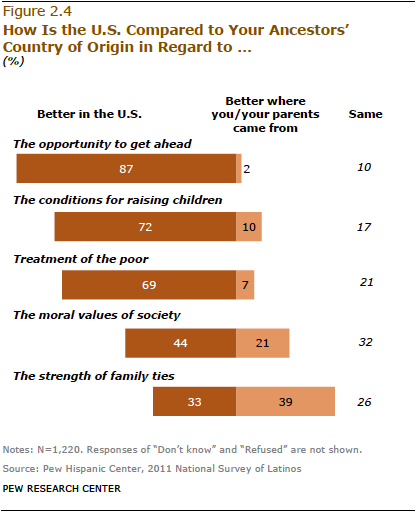 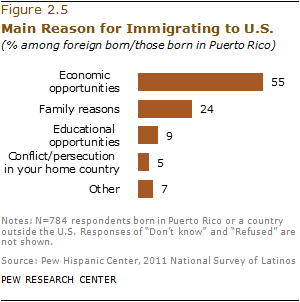 The survey finds that economic opportunities are the most common reason by far that Hispanic immigrants give for coming to the U.S. More than half (55%) cite this as their main reason, followed by 24% who say it was “for family reasons,” and 9% who say it was to pursue educational opportunities. 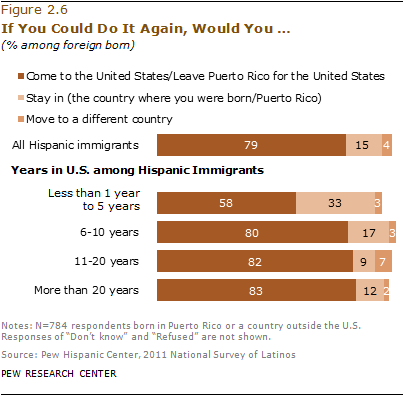 This difference in responses by years in the U.S. may reflect the recent economic downturn or the current environment regarding immigration reform. Hispanics—especially the foreign born—were hit very hard by the Great Recession (Taylor, Lopez, Velasco and Motel, 2012).

This finding may also reflect differences in the composition of immigrant cohorts. Among those who arrived in the last five years, there are some immigrants who eventually will return to their home country. By contrast, among other cohorts, many who had decided to return home likely already have.

Next: IV. Language Use among Latinos
← Prev Page
Page1Page2You are reading page3Page4Page5Page6
Next Page →

Hispanic Identity Fades Across Generations as Immigrant Connections Fall Away
Three-Fourths of Hispanics Say Their Community Needs a Leader
Majority of Latinos Say Skin Color Impacts Opportunity in America and Shapes Daily Life
About One-in-Four U.S. Hispanics Have Heard of Latinx, but Just 3% Use It
Hispanics and Their Views of Identity