Not only do Latinos have children at younger ages than non-Latinos, they also marry at younger ages. Some 15% of Latinos ages 16 to 25 are married, compared with 9% of non-Latinos in that age group. The higher marriage rate for Latinos is driven primarily by immigrant youths, 22% of whom are married. Marriage rates among native-born Latinos—10% for the second generation and 11% for the third generation—don’t differ markedly from the rate for non-Latinos.

Despite their relatively high rate of teen parenthood, most Latino youths do not look favorably upon having children prior to age 20. Three-fourths (75%) say that the prevalence of teens having babies is not good for society, an opinion shared by 90% of the overall youth population in the U.S.

Nearly seven-in-ten Latino youths (69%) say that teen parenthood hinders the ability to achieve one’s life goals. However, Latino youths are more inclined than other youths to favor parenthood at a relatively young age. Latinos say that the ideal age for a woman to have a child is 24, and for a man it is 25. Among all youths, these figures are 26 for a woman and 28 for a man.26

Latino youths are more tolerant of teen sex within a serious relationship or of teen sex that involves using protection; Latinos older than 25 are markedly less accepting of teen sexual activity no matter what the context.

The living arrangements and family structures of Latino youths differ markedly from those of their non-Hispanic counterparts. Latinos marry at younger ages than other groups. Some 15% of Latino youths are married, compared with 9% of the non-Hispanic population (Table 8.1). The likelihood of living together is similar between the two groups—7% for Latinos and 8% for non-Latinos.

While 61% of non-Hispanic youths live with their parents, this share drops to 57% among Latino youths (Table 8.2). However, Latinos are twice as likely as non-Hispanics to reside with a relative other than their parents, spouse or partner. While only 5% of non-Latinos are in this living arrangement, the share rises to 10% for Latinos, due entirely to the high proportion of immigrants living in this type of arrangement. Despite the fact that they are more likely to be married and have children, Hispanics are no more likely than non-Hispanics to be the head of household (or spouse or partner of the head of household); 27% of each group live in this type of arrangement.

Hispanic females tend to have more children than their non-Hispanic counterparts and to start having children at younger ages. On average, Hispanic females give birth to just over three children. In comparison, black females are projected to have an average of 2.15 children, and for whites the number is 1.86.27

The high fertility and youthful profile of Hispanic mothers is reflected in high birthrates for Hispanic females ages 16 to 25. In 2006, 140 of every 1,000 Hispanic females in this age cohort gave birth—more than double the rate for white females in the same age group (60 births per 1,000) and markedly higher than the rate for black females (110 births per 1,000).28 Immigrant Hispanic youths have particularly high levels of fertility; their annual birthrates are 50% higher than those of their native-born peers.29 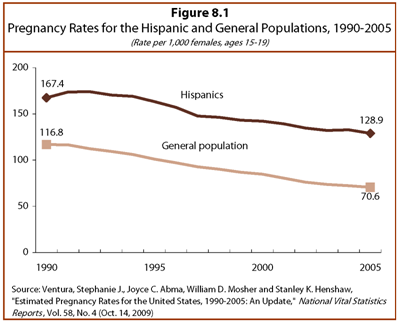 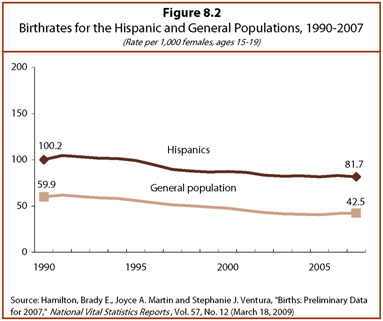 For Hispanic females, rates of teen motherhood are particularly high for immigrants. Among those ages 18 and 19, 26% of immigrants are mothers.33 This share drops to 16% for the second generation and 21% for the third generation. 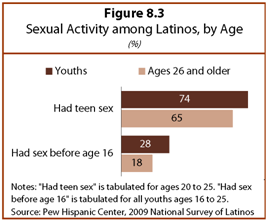 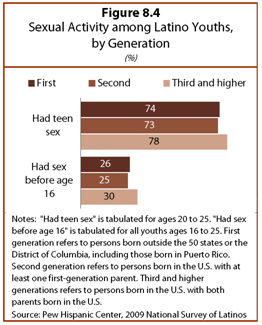 Among Latinos ages 20 to 25, the 2009 National Survey of Latinos finds a small but not statistically significant difference between the native born and the foreign born in the probability of having had sex as a teenager. Some 74% of immigrants report having had sex as a teen, compared with 73% of the second generation and 78% of the third generation. A similar pattern holds when looking at the likelihood of first having had sex prior to age 16. Some 26% of Latino immigrant youths report doing so, in comparison with 25% in the second generation and 30% in the third generation. 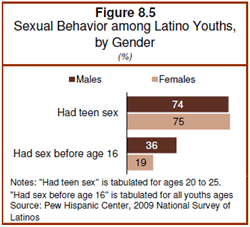 Similar shares of male and female Hispanic youths report having had sex—78% for males, 75% for females. When the sample is limited to youths who have completed their teen years, there are no gender differences in reports of first having sex as a teenager—74% of males report this, as do 75% of females. The share of people first having sex at a very young age does vary by gender, however. While 36% of males report having first had sex prior to age 16, this number falls by half—to 19%—among Hispanic females.

Overall, 27% of survey respondents ages 20 to 25 report that they became a parent in their teenage years.35 This number does not differ significantly from the rate among older Latino survey respondents, 23% of whom report having been a teen parent. 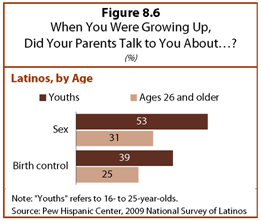 Immigrant youths are significantly less likely than their second- and third-generation counterparts to report ever discussing sex with their parents. Some 38% of immigrant youths report that their parents talked with them about sex when they were growing up, compared with 63% of second-generation youths and 65% of those in the third generation. 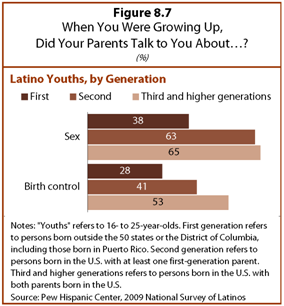 The likelihood of ever talking with parents about birth control increases significantly between the first and third generations. Among immigrant youths, 28% report discussing birth control with their parents. This number is 41% among the second generation, and then rises to 53% for third-generation Latino youths. 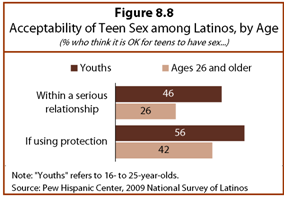 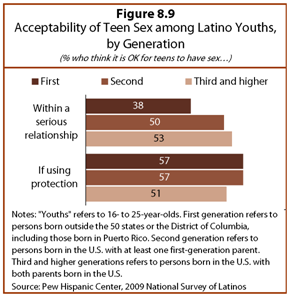 “A lot of…Hispanic girls just…get pregnant at a really young age and it makes it difficult for them ‘cause usually the father of the baby might not even stay with them.”
—15-year-old Hispanic female

“I feel like Latino parents in general…and I don’t know if I’m just generalizing…but they’re not very straightforward with what sex can lead to and how you can practice safe sex. Its more like ‘Just don’t have sex!’”
—20-year-old Hispanic female

“Everybody in that school, every girl, whether Hispanic, black whatever…they’re pregnant, either there’s a first child, second, third, fourth…they’re always pregnant, they’re around my age, 16, 17, there is a lot of pregnancy. It’s ridiculous.”
—17-year-old Hispanic female 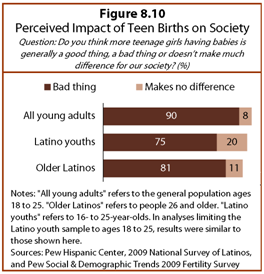 As far as the individual impact of teen parenthood, 69% of Latino youths believe that becoming a parent while still a teenager prevents people from reaching their goals in life, while 28% don’t think this is the case. 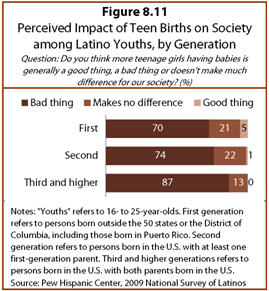 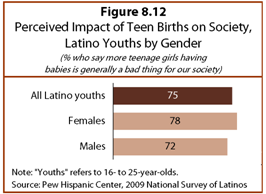 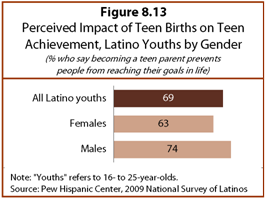 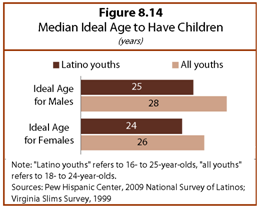