Latino schooling in the U.S. has long been characterized by high dropout rates and low college completion rates.15 Both problems have moderated over time, and across generations, though a persistent educational attainment gap remains between Hispanics and non-Hispanics.16 Yet, despite lower enrollment and attainment rates, young Latinos are just as likely as other youths to say a college education is important for success in life.

This chapter17 analyzes educational outcomes for youths using data from the March 2009 Current Population Survey.18 It also presents findings from the 2009 National Survey of Latinos and other surveys that explore young people’s attitudes toward education. 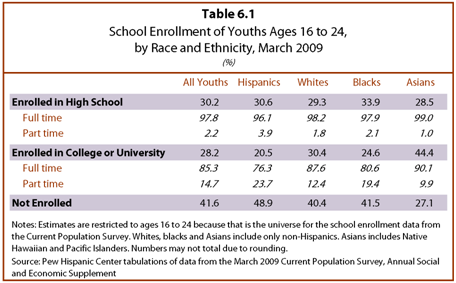 Among those enrolled in college, Latino youths are more likely to attend on a part-time basis. Nearly one-in-four (23.7%) Latino college students attend only part time, much higher than the national average of 14.7% and nearly double the rate among whites (12.4%). Almost all youths enrolled in high school attend on a full-time basis. 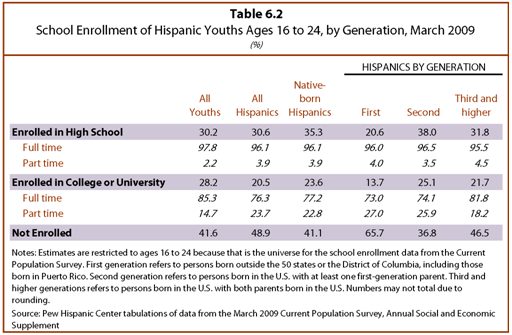 Within the cohort of native-born Latino youths, the children of immigrants, or the second generation, show greater engagement with schooling than the third and higher generations. Only 36.8% of second-generation Latino youths are not enrolled in either high school or college. That share is lower than the share for all youths (41.6%) and the shares of white (40.4%) and black (41.5%) youths who are not enrolled in school. However, among those in college, second-generation young Latinos are more likely than the third and higher generations to attend part time—25.9% versus 18.2%.

The educational attainment of youths is difficult to define unambiguously because so many youths ages 16 to 24 are still in the process of completing their schooling. This section presents evidence on three indicators in common use in the education literature. The first is the so-called status dropout rate. That is simply the share of youths who have not received a high school diploma or an equivalency certificate and are not enrolled in school or college.

A second measure is the “status completion rate.” This statistic, used by the National Center for Education Statistics (NCES), measures the high school completion rate for youths ages 18 to 24.20 Age 18 is the lower bound for this measure because most high school graduates have earned the diploma by that age.

The final indicator is a college enrollment rate, the share of those who have finished high school and are enrolled in college. Because this rate is defined only for those with a high school diploma or equivalency certificate, it differs from the enrollment patterns for the entire population of youths as reported in the preceding section.

The Importance of Education 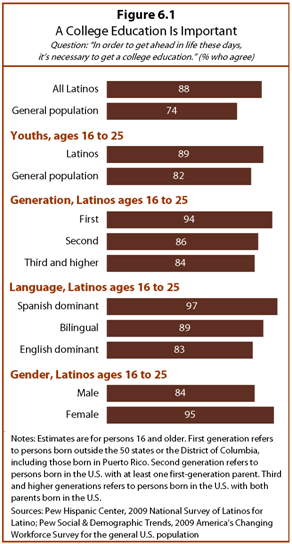 Despite their relatively low high school completion and college enrollments rates, nearly all young Latinos believe that it is necessary to have a college education to get ahead in life. According to the 2009 National Survey of Latinos, fully 89% of young Hispanics say this, similar to the share of all young people (82%) (Pew Social & Demographic Trends, 2009). Moreover, all Hispanics ages 16 and older are more likely than the overall U.S. population ages 16 and older to agree that a college degree is important for getting ahead in life—88% versus 74%. 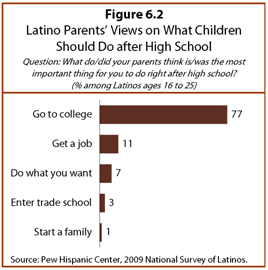 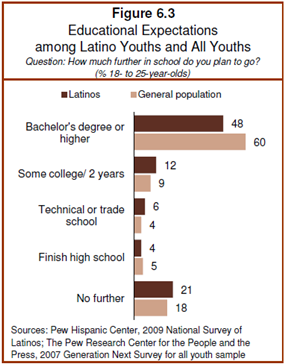 The value that young Latinos place on a college education is not nearly matched by their own personal expectations for educational advancement. Some 48% of young Latinos ages 18 to 25 say they expect to get a college degree or more, compared with 60% of the overall U.S. population of non-Hispanic youths ages 18 to 25.21

This gap is largely explained by the relatively low educational expectations of young immigrant Latinos. Fewer than one-in-three (29%) say they plan to get a bachelor’s degree or more, compared with 64% of second-generation Latino youths and 54% of the third and higher generations. 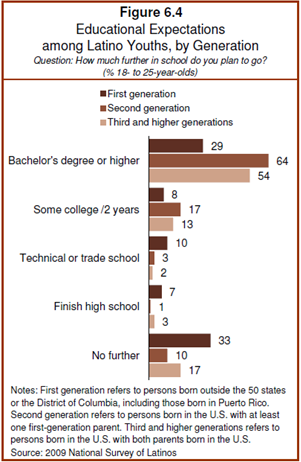 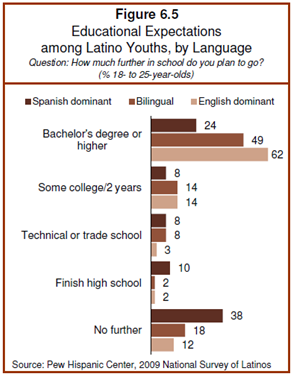 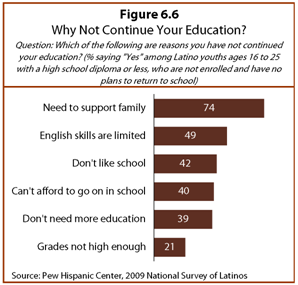 The foreign born make up 34% of all Latino youths, and they are much more likely than native-born Latino youths to be supporting or helping to support a family, either in the U.S. or in their native country. In 2007, 29% of all immigrant female Hispanics ages 16 to 25 were mothers, compared with 17% of native-born female Hispanics and 12% of white females (Fry, 2009). In addition, nearly two-thirds (64%) of all immigrant Hispanics ages 18 to 25 say they send remittances to family members in their country of origin, compared with just 21% of their U.S. born counterparts (Lopez, Livingston and Kochhar, 2009). In short, young immigrant Hispanics appear to have financial commitments that limit their ability to pursue more education, even though they see a college education as important for success in life.

“Parents expect so much and it gets…overwhelming. You have to support your family and take care of your brothers and sisters… [and] some people gotta grow up [quick and] basically never really have a childhood.”
—15-year-old Hispanic male

““Our parents are exhausted every time they come home. They don’t have time to be ‘oh you need help with your homework?’”
—21-year-old Hispanic male 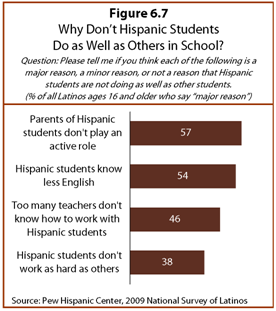 Not only are young Hispanics less likely than all young people to be enrolled in high school or college, but Latinos who are in middle school or high school have a significant gap in reading and mathematics achievement compared with white and Asian students, according to results from the National Assessment of Educational Progress.22 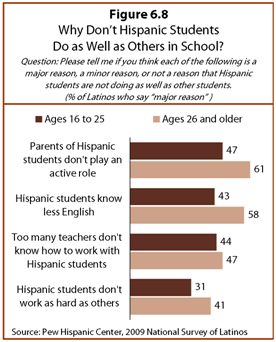 There are differences by age in several of these attitudes. For example, 61% of older Latinos (ages 26 and older) say the failure of parents to play an active role in helping their children succeed in school is a major reason for Latino students’ lagging educational achievement, compared with less than half (47%) of Latino youths who feel that way. 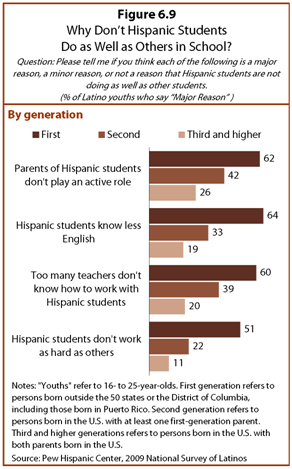 In addition, nearly six-in-ten (58%) older Latinos say the limited English skills of Hispanic students is a major reason; some 43% of Latino youths agree.

Older Latinos are also more likely than young Latinos to say Hispanic students not working as hard as other students is a major reason that Hispanics students are not doing as well in school as other students—41% versus 31%.