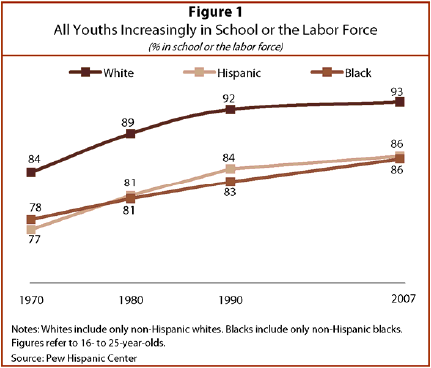 Young Latino adults in the United States are more likely to be in school or the work force now than their counterparts were in previous generations. In 1970, 77% of Hispanics ages 16 to 251 were either working, going to school or serving in the military; by 2007, 86% of Latinos in this coming-of-age group were taking part in these skill-building endeavors, according to a comprehensive analysis of four decades of Census Bureau data by the Pew Hispanic Center, a project of the Pew Research Center.

The growth over time in the share of youths involved in such market-oriented activities is not limited to Latinos. Similar changes have occurred among black and white youths. But the Latino trends are particularly noteworthy because their share of the young adult population has risen so dramatically during this period—to 18% in 2007, more than triple their 5% share in 1970. 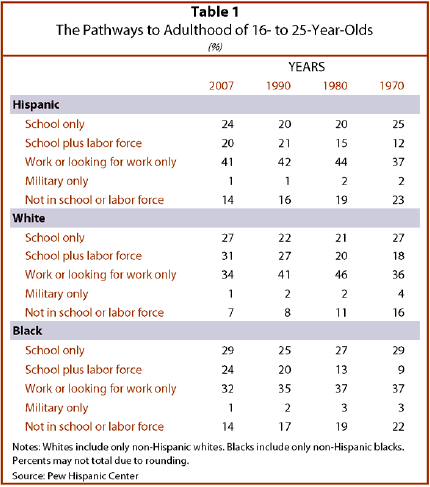 In the case of young Latinas, motherhood accounts for some—but not most—of their detachment from work and school. Birthrates among young Latino women are higher than those of whites or blacks, but these rates have been falling for decades. In 1970, two-thirds of the young Hispanic women who were not in school or the work force were mothers; by 2007, this share had dropped to less than a majority.

Looking more broadly at the changing pathways into adulthood across all dimensions of race and ethnicity, Hispanic youths (young men and women combined) lagged behind white youths in 2007 by about the same gap that their counterparts trailed whites in 1970. In 2007, 93% of white youths were either in school or working, compared with 86% of Hispanic youths. As Table 1 shows, Hispanics also had a lower school enrollment rate (44%) in 2007 than either white (58%) or black (53%) youths. The labor force participation rate of young Hispanics in 2007—62%—also trailed the rate of white youths (66%), due to the lower labor force participation of young Hispanic females.

Meanwhile, engagement rates for Hispanic and black youths were identical in 2007 (86%), and they were also very close in 1970 (77% and 78%, respectively). The growing attachment of Latino youth with school and work comes during an era of dramatic changes in the U.S. economy. For those without a college degree, the pathways into middle-income status appeared to vanish with the rapid loss of manufacturing jobs.2 The income gap between those with a college degree and those without increased steadily from the 1970s onwards (Pew Research Center, 2008).

This report analyzes the changing pathways of Latino and other youth into adulthood from 1970 to 2007. In addition to exploring their school and work patterns, it reviews trends in military service and incarceration among young men. For young women, the report also focuses on motherhood.

Other Pathways: Military Down, Prison Up

A pathway that has grown more common over time—albeit from a small base—is prison or jail. By 1990, about 2% of Hispanic youths were incarcerated, up from less than 1% in 1970. There has been little change in the incarceration share since 1990. The share of white youths incarcerated has remained about 1% since 1970. Black youths incarceration peaked at about 5% in 2000 and has since declined to 4% in 2007.

The sharp growth in the Hispanic share of this 16 to 25 age group has been driven by a combination of high immigration levels and high birthrates among Latino immigrants. These trends in turn have altered the demographic profile of Latino youths. The white and African-American youth populations continue to be largely native born. In contrast, the origins of Latino youths have shifted since 1970—not once but twice. In 1970, only one-third of Hispanic youths were foreign born. By 2000, almost half of Hispanic youths were immigrants. Since then, the share of Hispanic youths who are foreign born has receded (to 39% by 2007) as more Latino young adults are the children of the immigrants who arrived in the 1970s, 1980s and 1990s.

This report presents a comprehensive analysis of the basic activities or pathways of Hispanic, white and black youths ages 16 to 25. Using data on youths from the Decennial Census micro data files of 1970, 1980, 1990 and 2000 and the comparable U.S. Census Bureau’s 2007 American Community Survey (ACS), all youths residing in the United States are analyzed and thus the important pathways of service in the military as well as incarceration in correctional facilities can be quantified.

All references to whites and blacks are to the non-Hispanic components of those populations.

“Incarcerated” refers to males institutionalized in prisons and jails, hospitals, and juvenile institutions. See Appendix B for details.

Next: II. The Pathways of Youths to Adulthood
← Prev Page
You are reading page1Page2Page3Page4Page5Page6Page7Page8Page9Page10
Next Page →