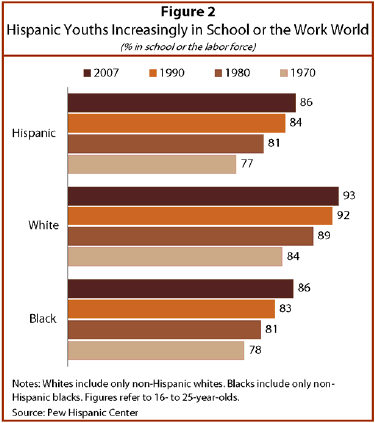 Before examining the incidence of particular pathways, we can portray the broad thrust of youth endeavors with a summary measure: the fraction of youths who were either enrolled in school or working (Figure 2). School enrollment or the world of work (including the military and looking for work) are the major core activities of youths as they transition from adolescence to adulthood. Youths who are attending school or who are working generally are acquiring market-oriented skills and are considered to be building their “human capital.” Youths not involved in school or the work world are thought to be “at risk.” A prominent federal interagency report asserts that “detachment [from school or work], particularly if it lasts for several years, puts youth at increased risk of having lower earnings and a less stable employment history than their peers who stayed in school, secured jobs, or both. The percentage of youth who are not enrolled in school and not working is one measure of the proportion of young people who are at risk of limiting their future prospects.” (Federal Interagency Forum on Child and Family Statistics, 2009) 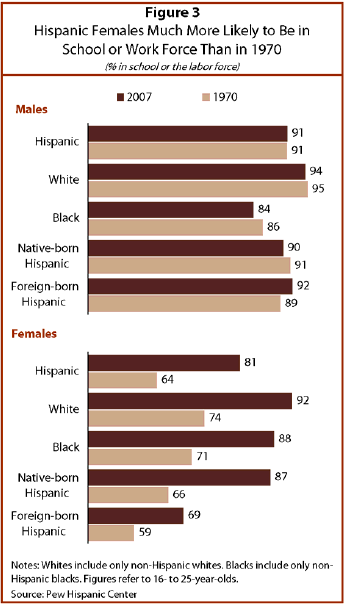 However, the proportion of young Latino females pursuing formal schooling or acquiring skills in the work world has steeply increased since 1970. At that time, only two out of three female Latinos were in school or the labor force, compared with four out of five female Latinos in 2007.

Schooling and Work among the Lesser-educated Youths

Labor economists have long observed that the employment crisis among young black males is concentrated among less-educated youths (Welch, 1990; Holzer and Offner, 2001; Freeman and Holzer, 1986). Figure 4 shows the proportion of youths either in school or the labor force among youths who have not completed any education beyond high school. Youths lacking any education beyond high school are less likely than other youths to be either in school or the work world. In 2007, for example, 81% of all young Hispanic females were engaged in labor market-oriented activities (Figure 3), but among young Hispanic females with no formal education beyond high school, only 76% were enrolled or in the labor force (Figure 4). 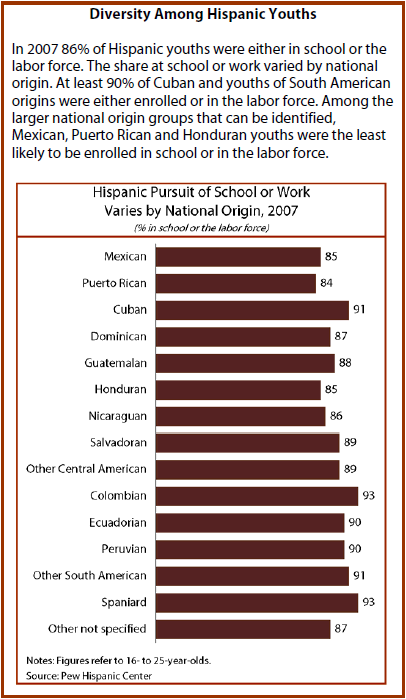 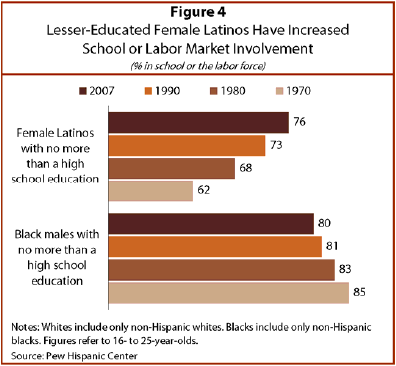