If owning a home is the gateway to the middle class and beyond, then more than two-thirds of American households have crossed that threshold. But who makes it, and who doesn’t, varies widely depending on the race, ethnicity and nativity of the householder. Whites are the most likely to own a home, and Hispanics and blacks are the least likely. However, minority households have closed the gap somewhat in recent years. The homeownership rate among immigrants is initially low but increases with the number of years of U.S. residence. And there are signs that immigrants are moving more quickly into homeownership.

The push to acquire a home has proved to be a double-edged sword. The surge in ownership from 1995 to 2004 was accompanied by rapid growth in debt in the absolute and relative to income for homeowners (Dynan and Kohn, 2007; Pew Research Center, 2008). Rising foreclosure and mortgage delinquency rates reflect the fact that, for some families, debt had swelled to unsustainable levels.

All households, regardless of race and ethnicity, experienced rising homeownership rates from 1995 to 2004. However, results from 2004 to 2008 were mixed. Homeownership rates for some groups continued to increase after 2004, but other groups lost ground.

Hispanics experienced a more sustained period of growth in homeownership than did white or black households. The Latino homeownership rate increased from 42.1% in 1995 to 49.8% in 2006 (Figure 2). There was only one interruption—homeownership slid backwards from 2002 to 2003, reflecting the cumulative effect of the 2001 recession and the economic slowdown that followed. In 2008, the homeownership rate for Hispanics was 48.9%, nearly 1 percentage point lower than in 2006 but 6.8 points higher than in 1995. 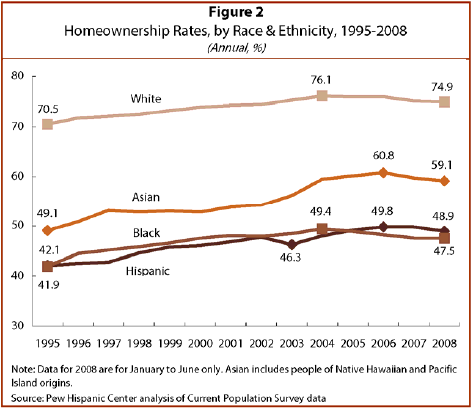 Despite recent setbacks, all minority groups have chipped away at the homeownership gap with white households. The Latino homeownership rate in 1995 (42.1%) was 28.4 percentage points less than the rate for whites (70.5%). The gap in 2008 was still high but had decreased to 26.0 points. Asians are closing the gap most rapidly, shrinking the disadvantage vis-à-vis white households from 21.4 percentage points in 1995 to 15.8 points in 2008.

Homeownership among Native-Born and Foreign-Born Households, 1995 to 2008

One reason for the large gap is that immigrants are disproportionately minority and present characteristics associated with lower rates of homeownership, such as lower income and levels of education. In particular, 75.7% of foreign-born households are Latino, black or Asian, compared with 20.2% of native-born households.13 Another reason is that the move into homeownership among immigrants takes time—only after an immigrant has been in the U.S. about 20 years does the likelihood of an immigrant owning a home equals that of a native-born householder.14 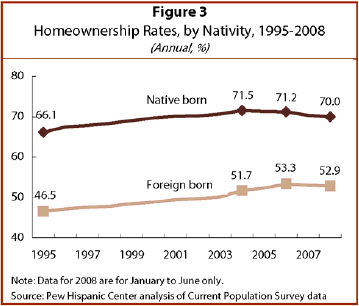 While homeownership for the native born peaked in 2004, ownership among the foreign born maintained an upward trajectory, reaching a high of 53.3% in 2006. Then, from 2006 to 2008, the homeownership rate for immigrants dipped modestly to 52.9%. The rate for native-born householders decreased by a larger amount, from 71.2% in 2006 to 70.0% in 2008. Although the gap in homeownership between immigrant and native-born households diminished slightly from 1995 to 2008, it is still quite large (17.1 percentage points).

Homeownership among Native- and Foreign-Born Households by Race and Ethnicity 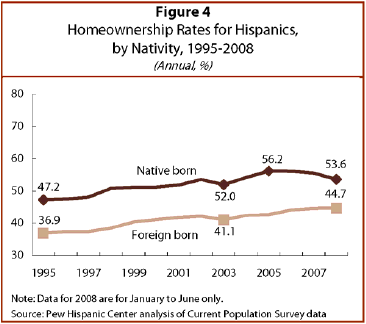 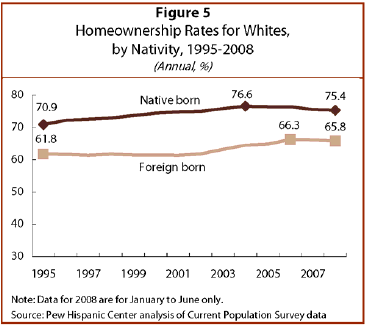 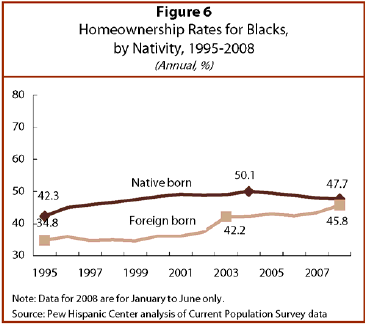 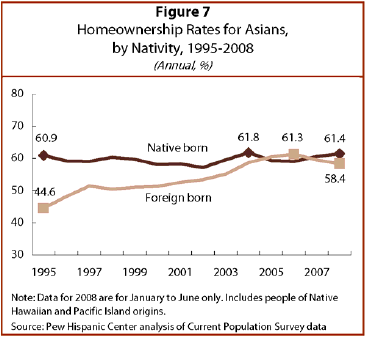 Assimilation into Homeownership among Foreign-Born Households, 1995-2008

The rapid growth in homeownership among immigrant populations and the ability of foreign-born Hispanics and blacks to stem a decline in recent years arise from the forces of economic assimilation. Immigrants’ incomes and their economic status improve significantly with time spent in the U.S. and the acquisition of citizenship. The key question is whether immigrant homeownership would also have declined from 2005 to 2008 if not for the forces that drive assimilation.

Homeownership among Foreign-Born Households by Years in the United States

Three notable points emerge from the trends in Figure 8. First, the homeownership rate for immigrants increases during the first two decades in the U.S. and then levels off near the rate for native-born householders. As shown in Figure 8, for each year from 1995 to 2008, immigrants who were in the U.S. for more than two decades had a homeownership rate of close to 70%.16

Homeownership among Foreign-Born Households by Citizenship

Immigrants who acquire U.S. citizenship are nearly twice as likely as non-citizens to be homeowners. In part, that reflects the influence of more years in the U.S. because the route to citizenship can be lengthy. However, this is an effect that appears even when comparisons are made among immigrants who have similar durations of stay in the U.S. or whose characteristics are otherwise similar.17

The reason this happened is that the naturalization rate in the U.S. trended up sharply after 1995 (Passel, 2007). The switch in status boosted the rate of homeownership for all immigrants, even as the increase was more modest for citizens or non-citizens alone. 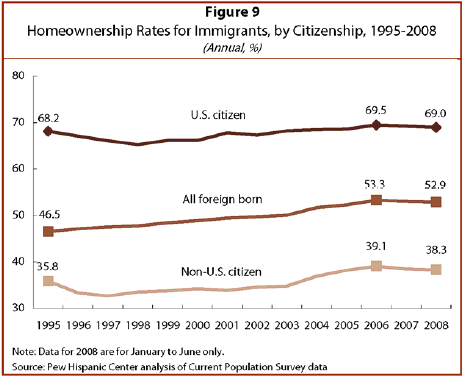 The Changing Attributes of Immigrants and Trends in Homeownership

The spread of homeownership among immigrant Hispanics and blacks from 2005 to 2008, even as it ebbed among other populations, is one of the notable developments in recent years. A more detailed analysis shows that the reason lies in the changing attributes of immigrants. Among other things, the average immigrant now has spent more years in the U.S. and relatively more immigrants have planted roots as U.S. citizens. The result is an ongoing rise in homeownership even amid troubles in the housing market.

This section illustrates the issue through the experience of immigrant Latinos. This group, 7.2 million strong, accounts for 44.8% of all foreign-born heads of households. By contrast, there are 1.4 million foreign-born blacks, and they account for only 8.7% of the immigrant householder population.18

The question is, how does one disentangle the impact of the changing characteristics of Hispanic immigrants from more general trends in homeownership? This analysis uses a statistical model that relates homeownership to a list of personal attributes, such as years in the U.S., citizenship, age, education and income.20 Once the relationship has been established, it is possible to use the model to estimate homeownership rates that relate to any given set of attributes. In this study, the goal is to estimate homeownership rates in each year for the attributes that describe Latino immigrants in 1995.

Figure 10 presents homeownership rates for immigrant Latinos computed two ways. One trend line, labeled “Predicted,” shows homeownership rates estimated by a statistical model that predicts the likelihood of owning a home by taking into account the characteristics of Latino immigrants in that year.21

The other trend line in Figure 10, labeled “Predicted, 1995 attributes,” shows homeownership rates derived from the same statistical model in each year under the assumption that, on average, Latino immigrants in that year possessed the same attributes as Latino immigrants did in 1995.

That means that we disallow any change over time in the characteristics of immigrants, including the number of years they have been in the U.S., naturalization rates, schooling and age. 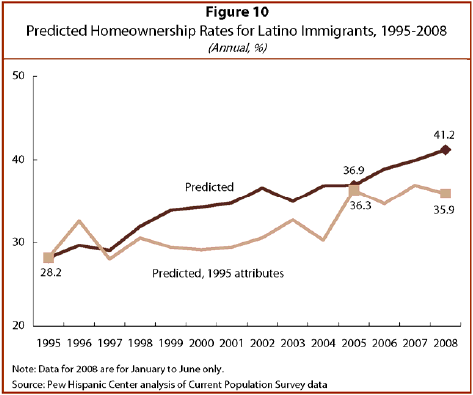 From 1995 to 2005, both estimates show a rising tide of homeownership for Hispanic immigrants. In 2005, the statistical model predicts a homeownership rate of 36.9%. The rate would have been slightly lower—36.3%—if immigrants in 2005 had the same characteristics as immigrants in 1995. In the interim, the two estimates show a varying degree of closeness. Generally speaking, if immigrant attributes are pinned to their 1995 levels—in other words they are not allowed to “imrpove”–the estimated homeownership rate is lower.

These results show that Hispanic immigrants were not immune to the downturn in the housing market that began in 2005. The observed increase in their homeownership rate from 2005 to 2008 is estimated to have arisen largely from the forces of economic assimilation. If not for changing characteristics, such as years spent in the U.S. and naturalization rates, Latino immigrants’ experience would have been more similar to that of native-born householders—rising likelihood of homeownership from 1995 to 2005, followed by either a leveling off or a decline.

Next: IV. Loans for Home Purchase in 2007
← Prev Page
Page1Page2You are reading page3Page4Page5Page6Page7
Next Page →