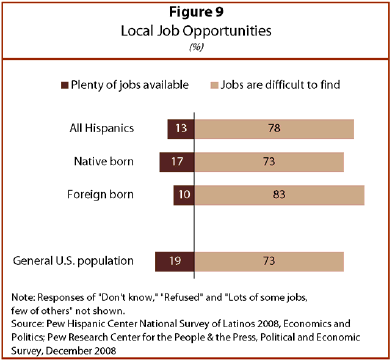 More than three-in-four (78%) Latinos say that jobs are difficult to find where they live, a sentiment shared by 73% of the general public.

The bleak perspective on job opportunities is pervasive among all groups of Latinos. However, the foreign born, especially those who have arrived recently, are more likely than the native born to report difficulties in finding work. Eighty-three percent of Hispanic immigrants report as much, compared with 73% of native-born Hispanics. Among the foreign born, those who have been in the U.S. for a decade or less are more likely than long-term immigrants to perceive difficulties in finding work. Eighty- eight percent of the more recent arrivals report that jobs are difficult to find, compared with 79% of immigrants who have lived in the U.S. for more than 10 years.