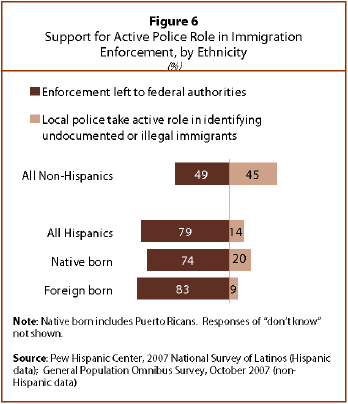 Most Hispanics surveyed disapprove of the new policies and stepped-up enforcement measures to combat illegal immigration. Their views on these matters differ sharply from those of the general population. But there are also notable differences within the Hispanic community.

Of the three new enforcement measures asked about in this survey, Hispanics are most negative about local police taking an active role in identifying undocumented or illegal immigrants. Some eight in ten (79%) say they would prefer such enforcement activity be left mainly to federal authorities; just 14% approve of local police taking an active role. 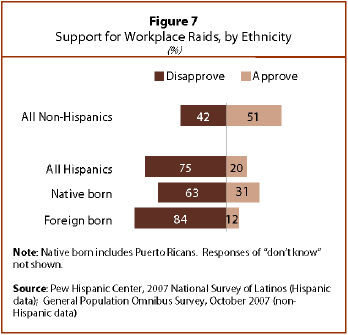 By nearly as lopsided a margin—75% to 20%—Latinos disapprove of workplace raids to discourage employers from hiring illegal immigrants. They also disapprove of states checking for immigration status before issuing driver’s licenses; however, attitudes on this question are more evenly divided, with 55% disapproving and 40% approving. 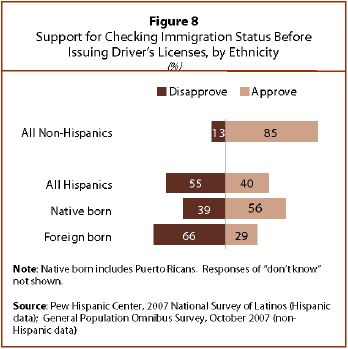 Latinos themselves also have differences on these issues, especially between the foreign born and native born. On all three questions, foreign-born Hispanics are more opposed to the stepped-up enforcement policies than are native-born Hispanics. The breakdown is as follows: 83% of the foreign born do not support active involvement by local police in immigration enforcement, compared with 74% of the native born; 84% of foreign-born Latinos disapprove of workplace raids, compared with 63% of native-born Latinos; and 66% of the foreign born disapprove of states checking immigration status before issuing driver’s licenses, compared with 39% of the native born. 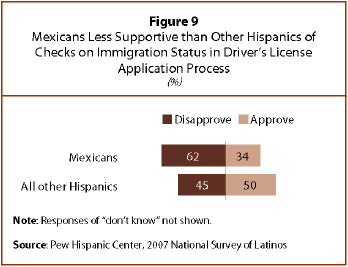 These disparities within the Latino community grow slightly wider when English-speaking ability—one of the key markers of attachment to this country—is also taken into consideration. For example, fully 89% of Latinos who are both foreign born and Spanish dominant in their language usage oppose workplace raids (compared with 84% of all foreign-born Latinos).

There are also some modest differences by country of origin. Native-born Latinos who trace their ancestry to Mexico are somewhat more opposed to all these measures than are native-born Latinos who hail from other countries. Similarly, foreign-born Latinos from Mexico are more opposed to all these measures than are foreign-born Latinos from other countries. The biggest country-of-origin gap surfaces on attitudes about driver’s licenses. Some 62% of Latinos of Mexican origin disapprove of checking for immigration status during the driver’s license approval process, compared with 45% of Latinos of other countries of origin.

How Much Attention Is Being Paid to Immigration Issues? 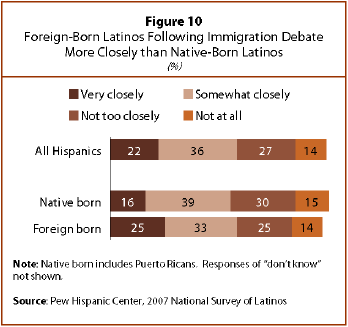 While most Latinos say they followed news accounts about the debate over immigration in Congress earlier this year, a substantial minority—about four-in-ten—say they paid little or no attention.

Overall, 22% say they followed news accounts of the debate very closely; 36% say somewhat closely; 27% say not too closely; and 14% say not at all. Foreign-born Latinos are more inclined than native-born Latinos to say they paid very close attention—25% versus 16%.

When asked a different question (“How much attention have local officials and political leaders in their community been giving to the issue of illegal immigration in recent months?”), a majority of Latinos say “not too much” (40%) or “none” (21%), while about a third (32%) say “a lot.” Non-Hispanics are similarly divided in this question (47% “not too much”; 25% “none”; 22% “a lot”). In both cases, the wide variance in responses to this question would appear to reflect the reality that immigration has been a very hotly debated issue in some states and local communities around the country, but not in others.

Nearly three-in-ten (28%) Latinos say that their local governments have made more efforts in the last year than in prior years to discourage illegal immigration, while 13% say their local officials have made fewer attempts in the past year and a majority—53%—say there has been no change. There are virtually no differences in these perceptions between native- and foreign-born Hispanics. 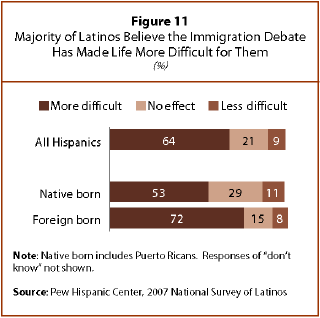 As with so many other questions in this survey, there are differences in perception between the foreign-born and native-born populations. Among the foreign born, more than seven-in-ten (72%) say the debate and the failure to pass a bill have made life more difficult for Hispanics. Among the native born, just 53% hold this view. In addition, those who say they have been following news accounts of the congressional debate very closely are much more likely than those who have not been following it closely to say that there has been a negative impact from the failure of Congress to act. Among the group that paid very close attention, 78% say things have gotten more difficult for Hispanics; just 46% of those who have not been following it closely share that view.

There are some partisan differences on this question as well. Some 68% of Latinos who identify with or lean to the Democratic Party say the fact that an immigration bill did not pass has made life more difficult for Latinos, while just 58% of Latinos who align with the GOP feel that way.

In response to five questions that explore whether Latinos feel any specific, personal negative impact from the heightened attention to immigration issues, slightly more than half (53%) of all Hispanics surveyed report at least one negative impact. The foreign born are more likely than the native born to report a negative personal impact; and the foreign born who lack English skills are especially likely to feel that way.

Some 12% of all Latinos say that, as a result of increased attention to immigration issues, they have had more trouble in recent months getting or keeping a job. Just 5% of the native born say this, in contrast to 17% of the foreign born and 19% of all Latinos who are Spanish dominant in their language usage.

Some 15% of all Latinos say they have had more trouble finding or keeping housing over the past few months because of this increased attention. Just 8% of the native born say this, compared with 20% of the foreign born and 24% of all Latinos who are Spanish dominant in language usage.

Some 19% of all Latinos say they have been asked to prove their immigration status more often in the past few months than previously. Just 12% of the native born say this, compared with 24% of the foreign born and 28% of all Latinos who are Spanish dominant in language usage.

Some 22% of all Latinos say they have become less likely to use government services, while 11% say they are more likely and 58% report no change. There is virtually no variance in the responses to this question by nativity or by English versus Spanish language usage.

Some 24% of all Latinos say they have become less likely to travel abroad, while 14% say they are more likely and 57% report no change. There are only modest differences in responses to this question by nativity and language usage patterns. 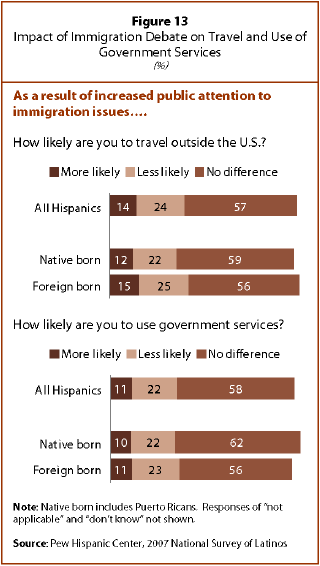 On all these questions, as would be expected, Hispanics who are not citizens are more likely than those who are citizens to report a negative personal effect. 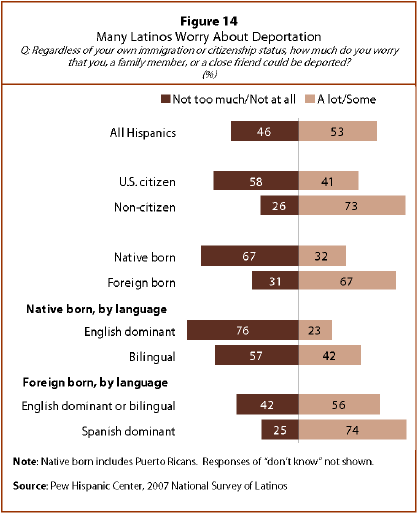 Given that citizens of the United States cannot be deported, it’s no surprise that there is a big difference in responses to this question by citizenship status. Nearly three-quarters (73%) of all Latinos who are not citizens of the U.S. say they worry a lot or some about deportation, compared with just 41% of Latinos who are citizens. Among the latter group, the presumption is that the focus of concern is for family members or friends who are unauthorized immigrants or whose status is otherwise in question.

Next: V. Views About Immigrants
← Prev Page
Page1Page2Page3You are reading page4Page5Page6Page7
Next Page →